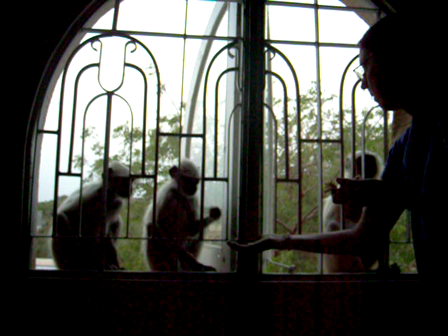 Volunteer
"Yeah, when the devotees brought Lord Jagannatha from the store in San Francisco, Srila Prabhupada had them go back and sure enough, Baladeva and Subhadra deities were also there. My wife claims that it's best if the deities somehow come to you. If…"

Volunteer
"In Western culture they very much encourage it and even tell them that if they don't do it they will get prostate cancer."

Volunteer
"That was him. When he got on the bus he had a beard and he did chant with good enthusiasm."

Volunteer
"It definitely sounds to me like you're ready to go out and chant in public."

Volunteer
"Are you the best judge?"

Volunteer
"Materially there is no contest. The woman is far superior. Therefore if the man has no spiritual potency, he will be no match for her or anyone else for that matter. The men are throwing away their ojas and then wonder why the women have no respect…"

Volunteer
"These all are wonderful questions:

1. Is the journey post death till the judgment date very difficult (as in all depends on karma) but what happens exactly
We are the architects of our own destiny. The desires cultivated during the course of this…"

Volunteer
"Prabhupada could understand that they would over indulge. When the devotees found out Srila Prabhupada drank a bottle of 7-UP the news was flashed all over ISKCON and in a matter of hours there were devotees all around the world purchasing it by the…"

Volunteer
"Srila Prabhupada explains that as devotees we only receive token punishment, “Because of my past activities, I was meant to suffer very much. But You are mitigating that suffering and giving me only a little.” In other words, by the grace of Kṛṣṇa a…"

Volunteer
"You may remember him as Bhakta Steve who got on the bus in Berkeley in '74 but now Dhruva Maharaja Das lives in Jagannatha Puri and has become a real expert and authority on Lord Jagannatha. We have his book, Jaya Jagannatha! and find it to be very…"

Volunteer
"Ki Jaya! Sravan Prabhu, while you're there in the airport, you can also distribute books and prasadam."

Volunteer
"I predict that at some point you won't be satisfied with that and you'll want to do more. :)"

Volunteer
"I'm sorry I wasn't able to help. Perhaps there are others who will explain this to you."

Volunteer
"It's the spiritual world which is completely beyond this world of birth and death."

I stumbled across the devotees in Golden Gate Park in San Francisco in 1967.