As per the theology of Sri Visitadvaita and the philosophy propounded by Sri Ramanuja and as the adherent follower of the same, adiyen would highlight some of the distinguishing features mentioned he…"

adiyen asks devarer i.e karthik ji to reply whose katha was he hearing to ? do you belong to Sri Vaishnava Sampradaya ? briefly explain the context in which the non-usage of agarbatti is men…"

adiyen's humble request is to recite both of them. ideally both carry their own specific potency. initially you can start with one say - either of them and end up learning by heart both of them and reciting the same.

rAmAyaNa glorifies the heroic past times of Lord rAma and his consort and is done gloriously done by sage vAlmIki. one of the rAmAyaNa's DhyAna…"

"paribhAshAsUthra can be split as follows - pari + bhAshA + sUthra

"shrImathe rAmAnujAya namah
arghya is one the fundamental process where one chants ( Brahma Gayathri by meditating on Aditya (Sun God / Surya nArAyaNa ) and releases the water into the river or holy water. arghya has been in practice since time imme…"

adiyen would like to put forward the essence of chanting in focus again. As Srila Prabhupad mentions about chanting the Hare Krishna mantra and its efficacies, similarly chanting the verses in sanskrit has its own potency…"

adiyen too was puzzled with the question and its quite worthy to note that you have noted why only Nrsimha Deity is present. If devarer were even more keen, he would have observed shrIbhAshyakArar's sannidhi too ( shrIrA…"

To be frank, I too had the same problem as almost everyone of us is doing some kind of occupational duty may it be gov…"

"Dandavat to u . prabhu .. who has given me the opportunity to become a friend of urs ..
We both are blessed by the mercy of Sri Radha Krsna n our beloved teachers :)" 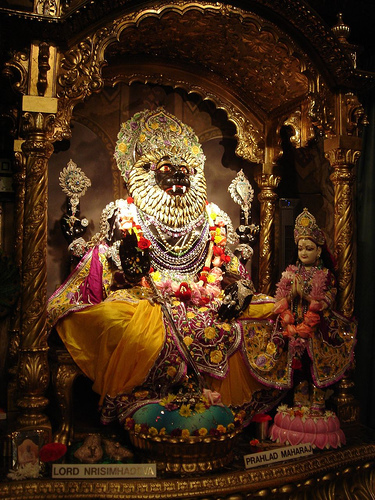 "All Glories to Sri Nrsimha Deva and Prahlada Maharaj !!
May i know in which temple's deity is this ??"

"Hare krsna Mataji !! dandavat Pamho !!
Gud to hear that u r heading to India :) ..
I am fine and gud in health by the mercy of Sri Radha and Krsna
My devotional services are going good by Lord's Mercy

All glories to Srila Prabhupada !!"

"It would be my honor to be in your association mataji!!
All Glories to Srila Prabhupada !!
And wishing u a Happy Ekadashi and the start of Bhishma Panchaka !!"

"One doubt Mataji !! Is ur email id i.e gmail id correct i.e is it
harobol.madhavi@gamil.com
or is it haribol.madhavi@gmail.com ??"
More…
Loading ...

of 4 Next
This reply was deleted.

I was introduced to Hare Krishnas long time back , way back in 1996 ..but started applying Srila Prabhupada's principles from the last few years in Vishakhapatnam.. All the credit goes to Lord Krishna

Well, I m still a graduate @ MNNIT-Allahabad. Will be soon graduated .in the upcoming year ..About me , I m actually a Sri Vaishnava and had been influenced by Prabhupada's teachings .. so chating 16 round daily and reading few Prabhupada's books

Well , not much though but some sincere help to improve spiritual consciousness and maintain that 24 hrs .. As Prabhupada says , always stay in the company of devotees . so i feel i m doing the same :)

Well.. any service would be greatly appreciated ..