In 1979, Radhapada das, a congregational devotee from Kolkata, had a dream where a young *sadhu *asked him, “Do you recognize me?”

“No, I don’t recognize you,” he answered.

The young sadhu said: “You really don’t recognize me?”

Then the young sadhu transformed into an older man.

“Yes, I have left this planet. Some of my disciples have experienced some difficulty in the beginning, but after a while everything will be alright. Anyway, you should give them some help. Try to help them.”

Prabhupada replied, “You can help them construct a big temple and things like that.”

“But, what about my wife and family?”

Srila Prabhupada then said, “Don’t worry about that. I will take care of them.”

When Radhapada awoke, he immediately went to the Kolkata temple, where Bhavananda Prabhu and Jayapataka Swami were, and explained his dream about Srila Prabhupada and his desire to help the devotees.

“I would like to buy you some Deities,” he said.

They told him, “Well, Prabhupada already told us what kind of Deities he wants, along with the dimensions for such Deities. If you like, we can make the Deities now. They can manifest Themselves whenever They wish.” They concluded that they would go ahead and make the big Radha-Madhava Deities.

Omkara Prabhu, a French devotee, supervised a murti-sculptor from Jaipur, Mr. Pandai, when he was manifesting the big Radha-Madhava. When Radha-Madhava were ready, the sculptor asked, “Well, what do you think?” Omkara Prabhu said, “Your design is very good, but maybe the eyes are too big.” However, according to the regulations that Mr. Pandai had received, the Deities’ facial features were correct.

When the Deities were finally completed, some devotees went for inspection. Everything was fine but Bhavananda Prabhu said, “Anyway, give them a final polishing so They have a very fine finish.” To the surprise of the devotees, giving that final polish manifested a fine, white thread-like line all around the body of Sri Madhava (like a brahmana thread), and on His forehead a faint tilaka appeared.

The big Radha-Madhava came to Mayapur in 1980. They had manifested Themselves before the appointed time — the altar wasn’t even ready. They were installed in the same year. 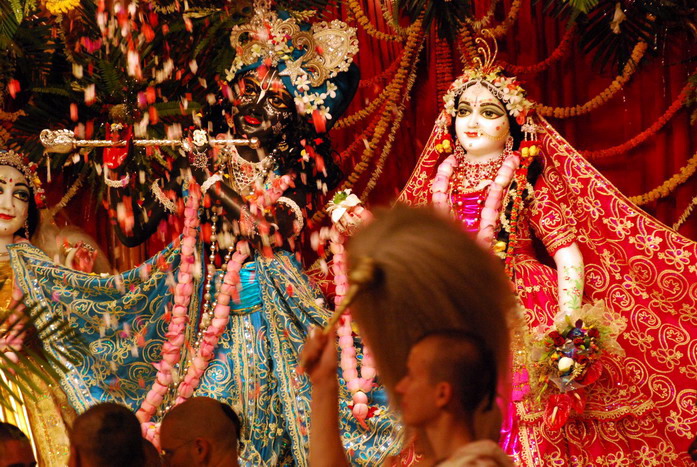 I have learnt this from Iskcon.