Swami Haridas ji maharaj was the incarnation of shri lallita sakhi of radha rani he did his sadhna in Nidhivan in vrindavan and the devine couple gave him the black charming idol o shri banke bihari we see in vrindavan. He had many pupils, Tansen being one of them

Shri Haridas ji's compositions may be classed as Vishnupadas. Even his prabandhas that do not refer to Krishna have come to be known as Vishnupadas, perhaps because of themystic source of his music but also because they are musically constructed in a manner similar to dhrupads. He is also said to have written tirvats, ragamalas and other forms. There are around 128 compositions attributed to him, of which eighteen are philosophical (siddhanta pada) and a hundred and ten devotional (keli mala).

Two beams of light are playing -
Unique their dance and music.
Ragas and raginis of heavenly beauty are born,
The two have sunk themselves in the ocean of raga.

Haridas's theology embraces not merely the Love of Krishna and Radha but also the witnessing of the Love, a state of mind called rasa. In an ecstatic condition of trance he sings of the play of Krishna among the bowers of Vrindavan. More than Krishna, Radha was the central personality of all his poems. 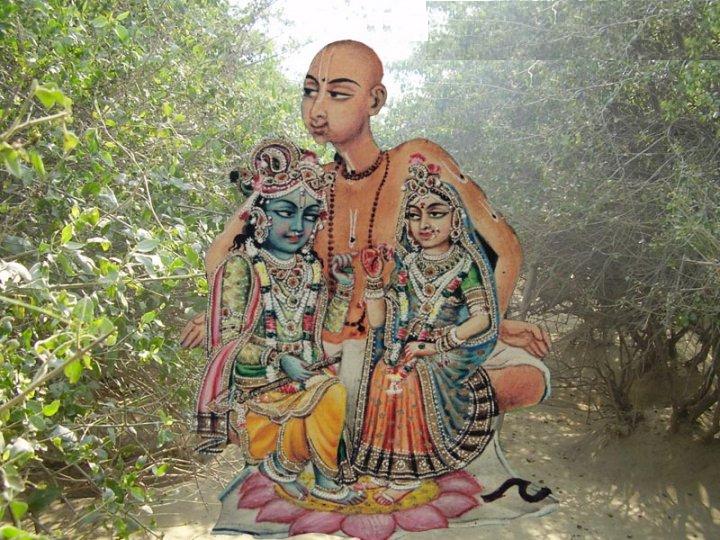