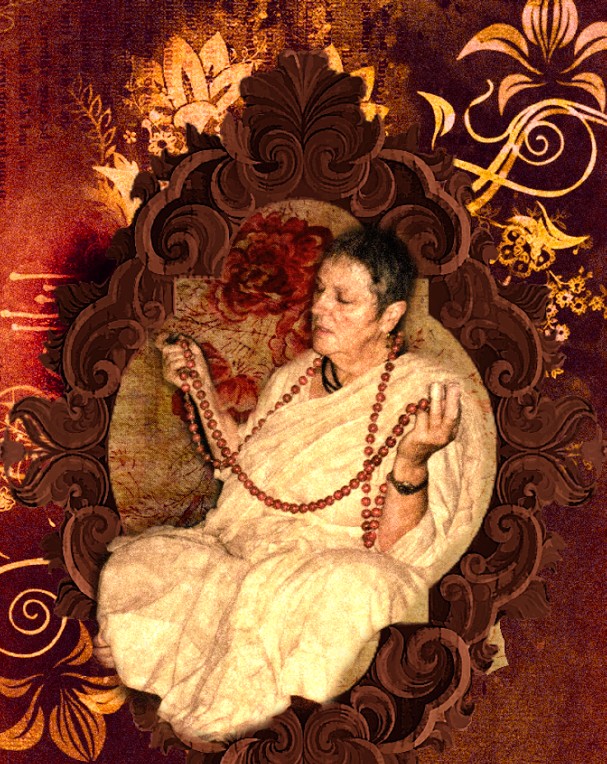 Kartamasa das: The first time I met Yamuna devi, my life changed forever.
I was in Saranagati for the Christmas holidays in 2000 having a reunion with my closest childhood friends. We were all in our early twenties, and having recently finished our university education and started work, we spent our time together recalling our childhood activities. One day we decided to have kirtan, but in a rather irreverent way, mocking the showy, elaborate vocal and instrument style we had all absorbed growing up in ISKCON.

After one such parody of kirtan, while we were all laughing at ourselves, Yamuna was standing over us. I don’t quite remember if she introduced herself (I don’t even remember how I knew it was Yamuna);
I just remember her saying, “Oh, you do kirtan?”
“Oh, no, no! We’re just playing around.”
“And you can play harmonium and mridanga,” she said.
“Oh, no; we’re just pretending.”
“Please come to our ashram and have kirtan there.”
“Uuuuhhh.”

We youth looked at each other with embarrassment and apprehension. Even without knowing anything about her, other than “Yamuna the cook and singer of the Govindam prayer lives here now,” I could sense some kind of uncompromising purity from her, even though she was so jovial. It made me feel sheepish.

“We have apple crisp,” she added. Her determination, coupled with our youthful appetites, changed our demeanors to interested smiles.
“So, can you come at 4:15?” And so at 4:15 the four of us made our first trip to Banabehari Mandir.

The atmosphere set the tone immediately. It was already rather dark out, and the ashram was only lit by candles. In the very center of the ashram was a brahmasthan [a dome over a skylight], and directly under that were plants and candles. Couches and chairs were arranged in a circular way around that center. We were seated there and served hot tea and delicious apple crisp on small china plates.

I do not remember any of the conversations that took place then. From talking to my friends about it years later, we could only recall that Yamuna and Dina seemed to take a genuine interest in us, and that genuineness instilled in us a very rare feeling of respect (for at that time we competitively took pride in noting hypocrisies and insincerities in people).

What is forever etched in my mind is the kirtan that happened next. Yamuna and Dina both sat directly across from me, and Dina began strumming a tamboura and humming. They then began to sing together-just the two of them - the entire Mangalacaranam prayers. Their eyes remained closed.

I had never been in a kirtan like that. There were no other instruments around, nor were we asked to play anything. We weren’t even asked to sing. We just listened. And that changed my life forever, because as I listened I began to feel something. I was not feeling anything inside myself (I was as unconscious as a brick). I was simply “feeling” something they were feeling. In other words, I was palpably affected and moved by what they were feeling as they sang.

Right then and there, I decided that I wanted to feel what they were feeling. It was the real thing - everything I had heard and read about chanting while growing up as a devotee, yet which evaded me as if it were a myth-here it was as clear as day right in front of me, in real live human beings.

In a matter of seconds, all my cumulative desires, aspirations, ambitions, priorities and hierarchies faded into the pale, replaced unequivocally by this overbearing drive to taste what they were tasting in this immensely deep, peaceful, prayerful kirtan.
This jolted my entire being, literally waking me up from a dullness at least a decade strong. Mystically my senses suddenly seemed to sharpen.

For instance, I suddenly became aware of the smell of incense that I couldn’t distinguish minutes earlier. The plants in the middle of the room—I was now convinced they were all tulasi plants. “This is it,” I thought to myself. “This is Vrindavan. This is kirtan. This is Krishna Consciousness.”

And I had never before had that thought in my entire life. I then closed my eyes too and listened to the kirtan attentively again. I loved it. Towards what seemed like the end of the kirtan, I believe we mumbled along, almost inaudibly, to the mahamantra, since none of us were accustomed to serious kirtan. Furthermore, I felt a bit out of my league even being in the same kirtan as these two devotees. The kirtan lasted about 45 minutes. I noted that because I was used to participating in a kirtan for 5 or 10 minutes, and 45 minutes was a total novelty to me.

I don’t remember leaving or any other exchanges that evening. I had withdrawn into myself, and the conversations around me were faded soundtracks behind my new purpose in life. Not just my new purpose - it was my first purpose in life. And now and forever, it is my only purpose—to taste kirtan the way Yamuna and Dina do. I cannot comprehend anything higher than that, and I don’t ever need to, because that was real Krishna Consciousness.

Upon returning to Alachua from my vacation in Saranagati, I was determined to explore kirtan. Nothing was more intriguing to me. I had spent much of the previous eight years playing in bands ranging from jazz to heavy metal, but hadn’t touched kirtan since childhood. Now it was a mission, all inspired by that one kirtan with Yamuna and Dina. I can’t remember if it was vocalized by either them or me, but I felt it was an instruction from them to try to have more kirtan. I may have told them that when I got back to Alachua I would try to have kirtan with my friends. Regardless, somehow I felt accountable to them in my heart to explore kirtan… .

I gathered all my most musical and talented friends. I explained to them that instead of trying to make excellent contemporary music, we should try to make excellent bhajans. They all went along with the idea, most probably because I was so enthusiastic about it. We chose to practice the bhajan Gay Gaura Madhur Sware because it had so much musical potential. We had a few soulful singers, harmonium, mridanga, kartals, violin, and I played guitar. There were possibly more instruments. Everything was intricately choreographed and rehearsed, like a band practice.

However, we would warm up and warm down with simple and spontaneous mahamantra kirtan. The “rehearsals” lasted only about three sessions. Without a word spoken about our previous plans, we unanimously opted to meet weekly for more spontaneous bhajans, taking turns leading and encouraging each other with a lot of love and patience. Soon, non-musical friends were invited, and soon after that we opened to anyone that was interested in coming. That was the beginning of Alachua’s “Wednesday Night Bhajans,” which still continue regularly as of this writing, and also coincided with a global interest in bhajans amongst the devotee youth. For myself, my role was as a facilitator, overseeing the sound system and pacifying my neighbors and apartment manager.

But the drive and aim to engage in and taste kirtan came directly from Yamuna and Dina prabhus. While I greatly enjoyed those kirtans, I felt like I was just taking the first baby step of a very long journey. In my heart, I couldn’t wait to get back to Saranagati and to have more kirtan with Yamuna and Dina. The next chance I got to go was the following Christmas break, 2001, one year after my first meeting with them.