“Srila Prabhupada spent his last 6 weeks on this planet in Vrndavana Dhama, and I was fortunate enough to spend the month of October serving him while chronicling every event, Up till now, one of the main methods of getting your Bhakti Sastri Degree in ISKCON involved taking six months off from your job or service to study in person in Mayapur or Vrindavan. This made it elusive and difficult for many to get the “family transcendental diploma” based on Srila Prabhupada’s books which Prabhupada wanted all his “spiritual sons and daughters” to inherit. 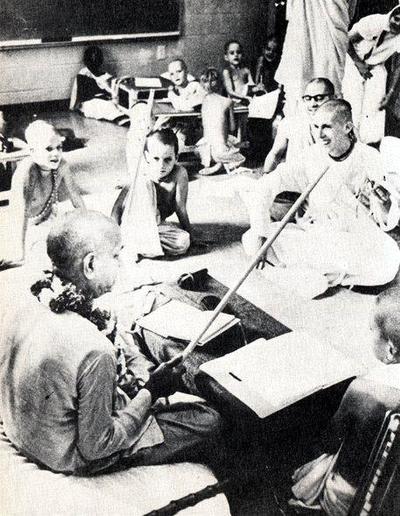 Across the world, COVID has, for better or worse, changed the way we do many things in our lives. Countless children have attended school, Sunday school and even ‘camp’ online this year. More than ever before, children live online – making new friends, developing established relationships, learn, recreate, etc.

With the added stressors COVID has brought, it is no surprise that child abuse has increased, in perso Last year there was an incident where I received a major chastisement because of not having properly understood the unique position of Srila Prabhupada. Well, I thought I understood his position but unknowingly and subtly I got led in way that would have meant exactly the opposite! The repercussion for me was polite but very grave, something I had never experienced in my spiritual or even in my material life. It was something I would carry whole life as it taught me a little what is meant b GBC SPT: Our team is pleased to invite you all to our bi-monthly series of interviews on the topic of Srila Prabhupada as ISKCON’s pre-eminent Siksha Guru. We are kicking off the series with one of Srila Prabhupada’s most dear disciples HH Giriraj Swami. Writing the last chapter of the Srila Prabhupada-lilamrita was an intense experience for me. Prabhupada was teaching “the final lesson,” and I relived the day-by-day remembrances of being with Srila Prabhupada and serving in his ISKCON movement in the final days leading up to his disappearance. Those days were like a drama unfolding. Would Prabhupada stay with us? What would we do without him? And again I felt the grief at his departure. I was also reminded that Prabhupada’s last days were fille 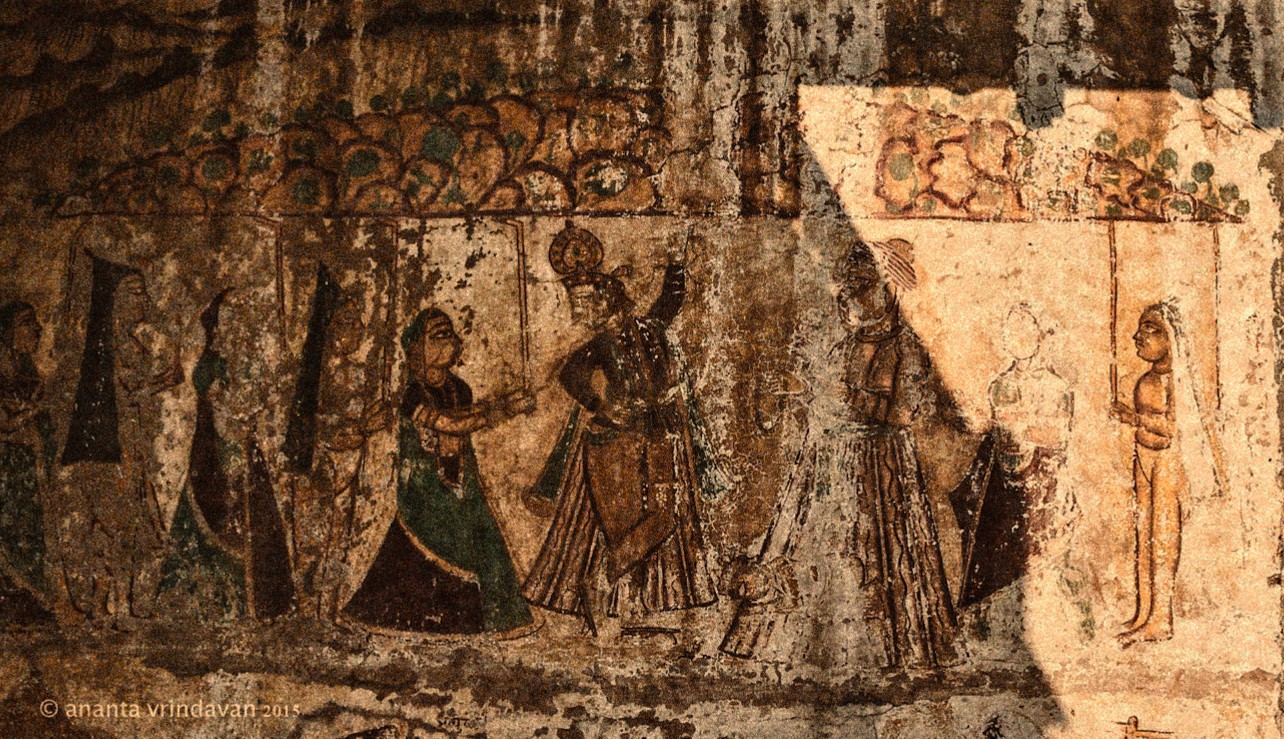 There so many benedictions for the month of Kartika and we get constant reminders via email, messages on mobile and so many other mediums. The list grows only bigger by the day. 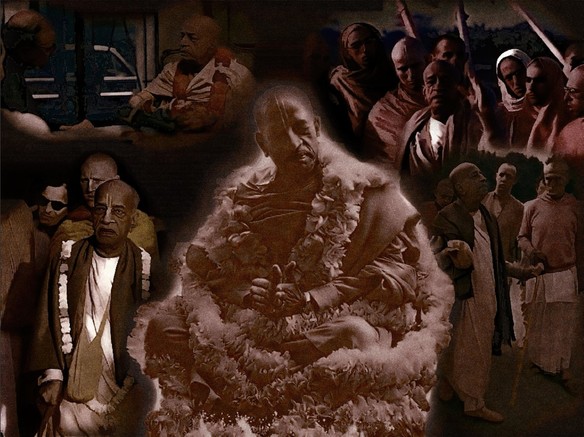 ‘One who understands the transcendental nature of My appearance and activities never attains…never has to take birth again in this material world, but attains My eternal abode.’ Those divine personalities who come to distribute the treasure of prema bhakti, the emissaries of the Supreme Personality of Godhead, their lila is of the same natu For an improved version of this article please visit: https://girirajswami.com/blog/?p=17570

I am very grateful to Srila Prabhupada for having brought me into your association. You are his sincere followers, and many of you have been serving him for decades, from when you read or heard about him or met him in person.

Once, on his guru maharaja’s disappearance day, Srila Prabhupada said, “On the absolute platform, there is no difference between the appearance and the disappearance of the spiritua GBC Strategic Planning Team (SPT) is pleased to invite you to the Day 1 of our 3 day series celebrating Srila Prabhupada Disappearance Day festival reflecting on the role of Srila Prabhupada as our preeminent Siksha Guru with Malati Devi Dasi. 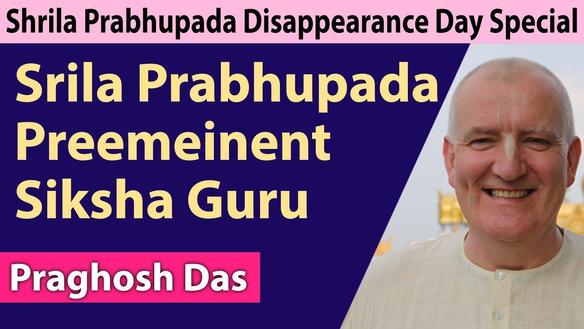 Dear Srila Prabhupada! As I was preparing the accompanying lecture on your pastimes in Vrindavan over the years, I stumbled across this photo of myself looking at you in Vrindavan from a short distance away with a smile on my face. I feel so honoured to have been with you at that time! For the pleasure of the devotees I researched many of your pastimes in Vraja from 1925 to 1977. My talk on Tuesday on my YouTube channel at 3:30 pm India time will highlight your glories the day before we all cele After Srila Prabhupada left us on November 14, 1977, I came across a section in Srimad-Bhagavatam—Canto 4, Chapter 28—in which he explicitly discusses the disappearance of the spiritual master and how the disciple is to serve him—even in separation. The following paragraph summarizes the essence of his instructions: 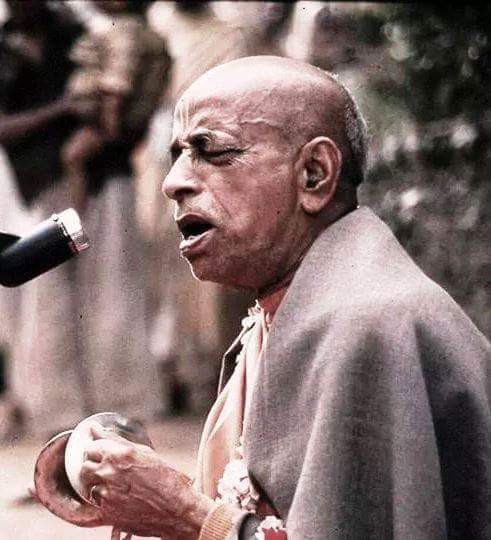 All Glories to Srila Prabhupada!

It is only possible to deliver a conditioned jiva from Maya,

By divine intervention of God.

To a realm that is higher;

An ocean of liquid love!

In His mercy, to bring us there,

He sent us Srila Prabhupada.

He not only comes Himself, But Nitai-Balarama empowered Srila Prabhupada,

To bountiful conceive it.

A world encircling garland of prema-nama-sankirtana! This document is a report of some of the details that occurred during the last five days of Srila Prabhupada’s presence with us in Vrndavan, India. It is a diary which was written everyday in Vrndavan at that time. It herewith is delivered as it was written down 38 years ago in l977, with no additions. (Indeed, even the original word misspellings are included as they were written down at that time). Forty-four years ago this year, His Divine Grace A.C. Bhaktivedanta Swami Prabhupada left this world for the divine abode of Sri Krishna and His pastimes. During his empowered life as a preacher of Krishna consciousness from 1965-1977, he accomplished more than practically any acharya in history, bringing the opportunity for the highest attainment of Goloka Vrindaban to millions of souls throughout the world. We are brought to tears no longer having his association in our midst.