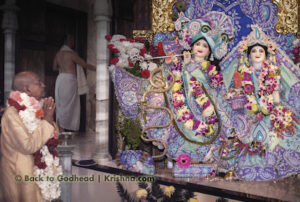 There is an interesting story that I wrote about. It took place when “Govinda” first came out, when the recording was first released. I was in England, and Yamuna was in England, and we sent this recording to the devotees in Los Angeles to show how we were really preaching big time to the Beatles and had done this record. But the devotees in Los Angeles didn’t want Prabhupada to hear this, because they thought it was very strange that a woman’s voice would be leading the Hare Krishna mantra. And so they didn’t let Prabhupada hear it. So, one morning, just before the greeting of the Deities, Prabhupada was sitting on his vyasasana. When the Deity doors open in Los Angeles, there is a big billow of incense smoke from the charcoals. The devotees use a lot of incense, and when they open the doors, it kind of pours out like a big cloud coming out.

So, right before this, Prabhupada said, “What about that record that the devotees sent from London?” He had heard about it. So they told him, “It is just Yamuna singing; we don’t want you to hear it.” And they added, “There is no place to play it.” So he said, “Just play it on the system, the speakers.”

They said, “Okay” and very reluctantly went and fetched the recording and played it. And it was just at the right time, and the song is about five minutes long. As the Deity doors opened, Prabhupada was sitting on his vyasasana, and he didn’t say a word. He just listened with his eyes closed. And devotees got to see streams of tears coming down his cheeks. And that day Prabhupada ordered that the song be played in all temples all over the world at the time of greeting the Deities.