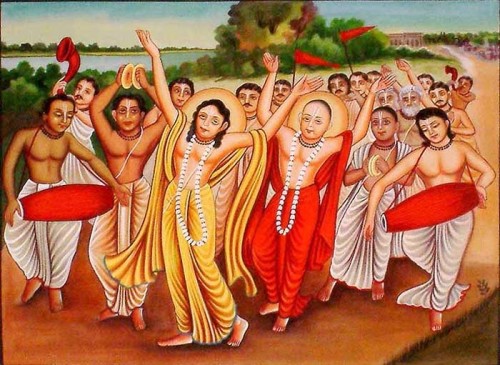 Excerpt from The Perfection of Yoga, an edited series of lectures on the sixth chapter of Bhagavad-gita As It Is.
by His Divine Grace A.C. Bhaktivedanta Swami Prabhupada:

In India there are sacred places where yogis go to meditate in solitude, as prescribed in Bhagavad-gita.

When Lord Chaitanya Mahaprabhu was performing kirtan in India some five hundred years ago, He organized in each group sixteen people to lead the chanting, and thousands of people chanted with them.

It is specifically stated in Bhagavad-gita that to perform meditational yoga one should go to a secluded and holy place. In other words, it is necessary to leave home. In this age of overpopulation it is not always possible to find a secluded place, but this is not necessary in bhakti-yoga.

In the bhakti-yoga system there are nine different processes: hearing, chanting, remembering, serving, worshiping the Deity in the temple, praying, carrying out orders, serving Krishna as a friend and sacrificing for Him.

Out of these, sravanam kirtanam, hearing and chanting, are considered the most important.

This can easily be performed in one’s own home, with a small group of friends or with many people in a large public place.

One may attempt to practice meditational yoga in a large city or in a society, but one must understand that this is one’s own concoction and is not the method recommended in Bhagavad-gita.

In conclusion, analysis of people’s personal experience as well as the Vedic-yoga teachings reveals that kirtan offers wonderful material, emotional, and spiritual benefits – for body, mind, and spirit. Sometimes kirtan is compared to India’s legendary kalpa-vrksa “wish-tree”, which can grant wishes. So why limit our comparison of kirtan to a mango which must be experienced to know its flavour? A wish-tree can deliver pineapples, coconuts, and anything else you might desire.