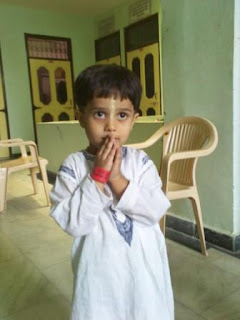 Once Devotee Mataji visited her non Devotee mother along with her child who also was serious Devotee of Krishna.
They all three were at home. Elders were cooking and exchanging with talks. By the time they realized that child was missed. No words. No child. No sound.
-aaaaaaaaaaaaaaaaaaaaaaaaaaaa!!!!
Suddenly, screaming voice of a small kid was like a thunderbolt but inside the house.
Immediately, Grandmother and mother ran to the kitchen and found a child standing before the door opened refrigerator. Saw him crying, really shocked with something.
They asked what happened. With rounded lips and eyes also with tears pouring from his eyes he showed with his tiny fingers the refrigerator. And told:
-         Grandma keeps dead bodies in the refrigerator.
It was a real thunderbolt, now in the heart of a grandmother. From that time she decided to become a vegetarian.
References: from the lectures of His Holines Bhakti Vidya Purna Swami Maharaja.
Tags: kids, change, heart, love, mother, please, vegetarian
E-mail me when people leave their comments –
Follow