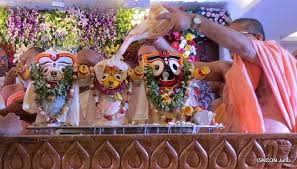 On this full-moon day, sixteen days before Ratha- yatra, Lord Jagannatha is bathed. He becomes sick and is confined to rest for fourteen days. He is then offered special care until He comes out for Ratha-yatra.

A special bath of Jagannatha takes place on the Purnima of Jyestha month to commemorate the appearance day of Lord Jagannatha.

According to Skanda Purana, when King Indradyumna installed the wooden deities he arranged this bathing ceremony. This day is considered to be the birth-day of
Read more… 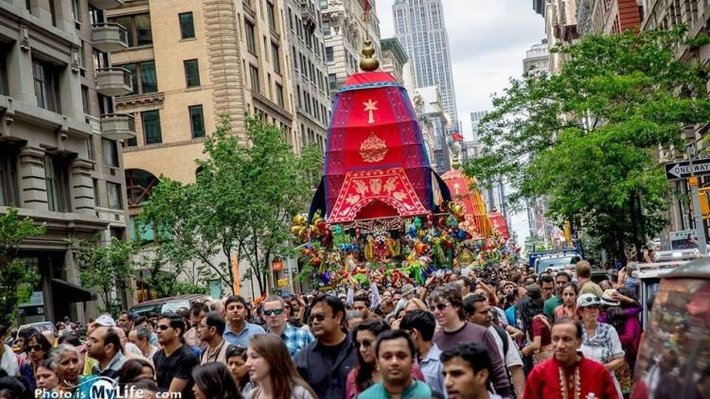 With folded hands, we thank all the Vaishnavas for participation in this year’s Kshetra Parikrama.  Irrespective of the pandemic and the bridge in physical association it has caused, in great numbers from all around the world, has tuned in daily to participate in the parikrama engaging our minds fully in Puri Dham. 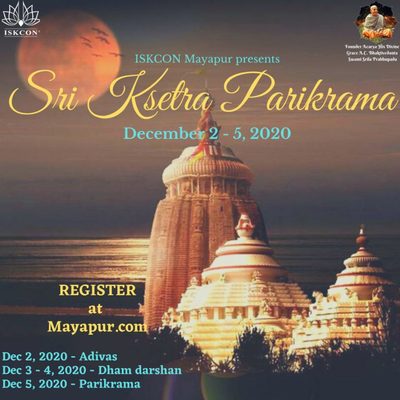 Happy Dipavali. A Good News for You!
Welcome to Puri Parikrama 2020!

As Supremely Merciful as Lord Jagannath, His Divine abode Puri dhama is reaching to you, wherever you are, in any part of this planet and you can join us in Puri Parikrama Online everyday from 2nd Dec-5th Dec. Do not miss the mercy of performing Puri Parikrama on the specific day prescribed in Scriptures(on the tithi of Marga sirsa masa Pancami – the 5th day after Purnima, in the month of Marga sirsa, this year it falls on 5th

Caitanya Mahaprabhu proclaims that the Holy Names will be glorified in every town and village. In our village within a town, the local Topanga Canyon media resonated Lord Jagannath’s mercy. Even though He could not appear on the beach amongst ten thousand or so happy festival-goers, He found his way into every home in our small community nestled in the mountains of Los Angeles county. I take no credit for His appearance here. I just opened the bi-weekly paper to find a darshan of His smile. We m 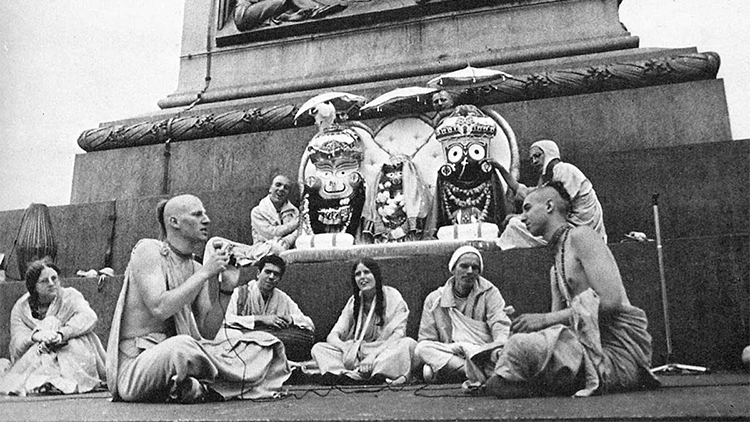 Ratha Yatra is usually a summer staple for ISKCON devotees, a chance to pull Their Lordships Jagannatha, Baladeva and Subhadra on Their chariot through the streets, share Krishna consciousness, see old friends and connect. With the COVID-19 pandemic, of course, none of this is possible in person, and Ratha Yatras all over the world have been cancelled. But devotees are thinking creatively and coming up with virtual alternatives for the chariot festival. 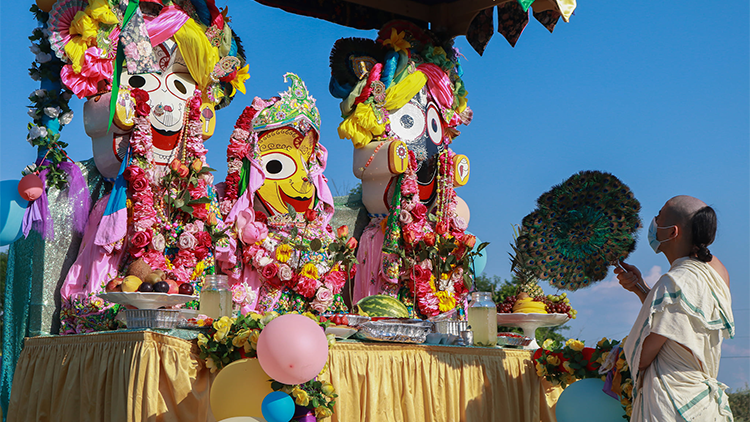 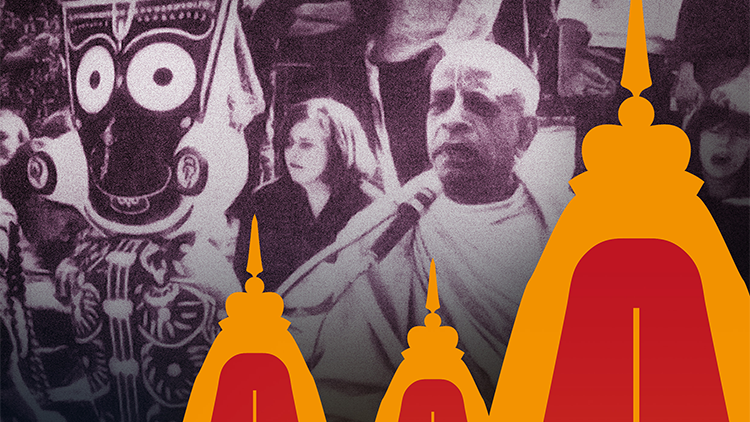 This year we won't get the chance to pull Lord Jagannatha, Lord Baladeva and Subhadra Devi's chariots through the streets but don’t let that dampen your spirits. Get ready to welcome Them into your hearts this weekend!

The festivities will include Deity darshans, history 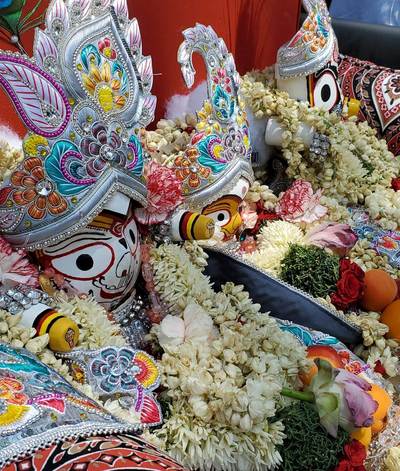 In what is normally an event with 30-40,000 people in attendance, the Festival of India/Chariots was down scaled substantially due to the epic Covid-19 epidemic. That’s the reality today—learn to adjust.

The organizers of this year‘s program in Toronto operated as cool as cucumbers, as usual, and their approach to this beloved event was full of innovation.  Deities of Jagannath were stationed in a convertible and were taken for a ride down the customary route of Yonge St to the waterfront at Su On 12 July, 2020, Summertime is Ratha Yatra time! The Ratha Yatra festival is a celebration of reunion, when Their Lordships Jagannatha, Baladeva, and Subhadra, who had been separated from Their devotees during a two-week “sick” leave, finally return and are taken out on a pleasure ride in a gorgeously decorated chariot. On a deeper level, it signifies the ecstatic reunion of Krishna with the residents of Vrindaban aft 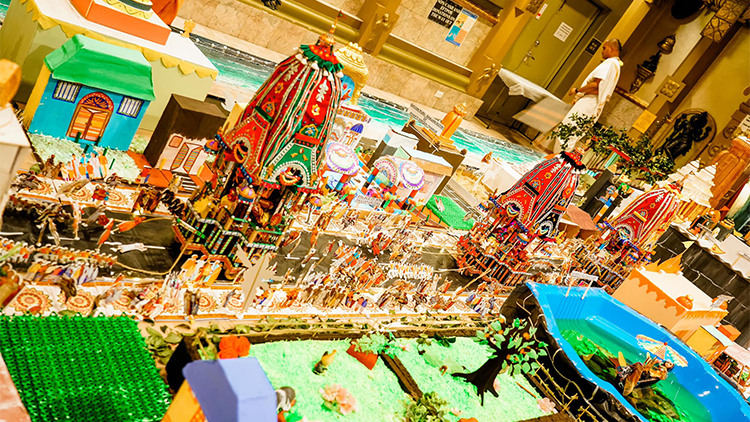 When devotees at the ISKCON temple in Sydney, Australia, couldn’t organize their regular full-fledged outdoor Rathayatra festival due to COVID-19 restrictions, they decided to bring the whole city of Puri and a new custom-built chariot into their temple room for a small indoor Rathayatra.

Carried out in consultation with head pujari Bhaja Govinda Das, the event for the pleasure of Their Lordships Sri Sri Jagannath, Baladeva and Subhadra took place on June 23rd, the date 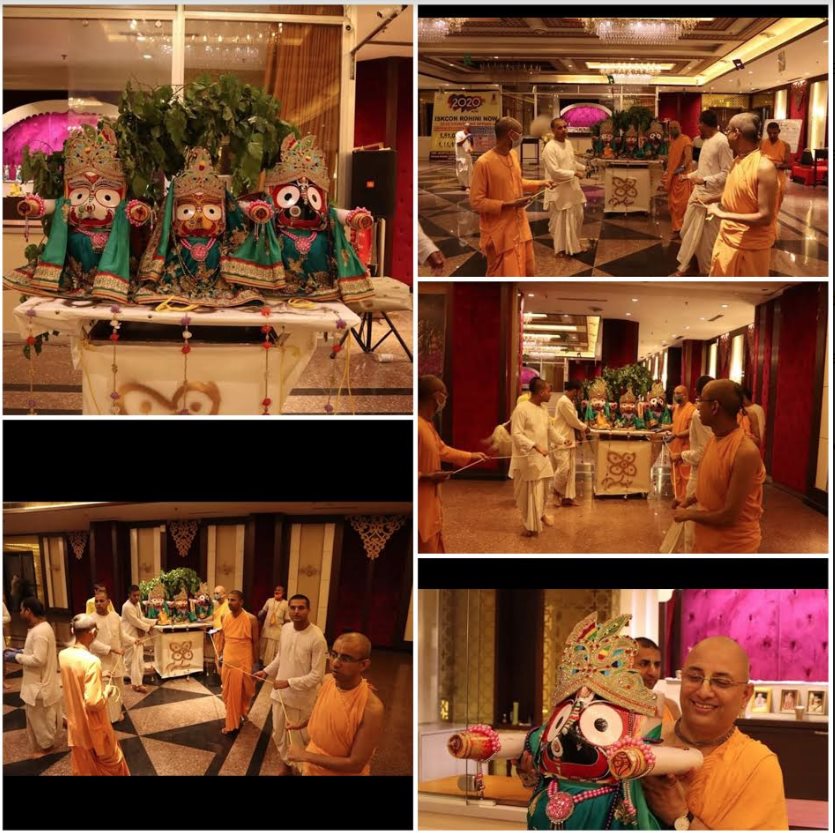 Amidst the uncertainties, whether there would be ‘Rath Yatra 2020′ or not, holy Puri’s three chariots were taken out in grand procession. Lord Jagganatha not only came out with his siblings but also maintained the continuity of the age old festival.

Devotees around the world got satiated after their lordships’ darshans though it was all virtually. Year 2020 is really going quite heavy for not only material persons materially but also for the devotees’ community spiritua

I offer my obeisances to His Divine Grace Abhay Caran Bhaktivedanta Swami Prabhupada! Lord Jagannath is a very special deity in Rajapur. Radharani created the Navadvipa dhama for the pleasure of Lord Krsna. And Krsna gave the blessing that all the holy places will 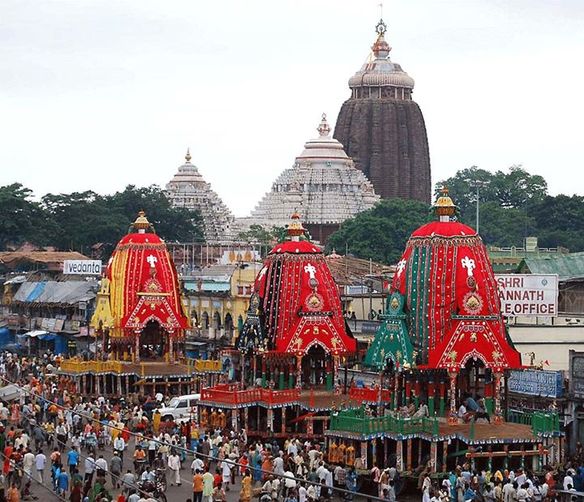 Our life is like a yatra – a pilgrimage, a spiritual journey towards the Divine. Our body symbolises the rath or chariot, through which we embark on the journey towards serving and attaining eternal love of the Lordships. Though we live in this material body or ‘rath’, the bonafide shastras and acharyas advise us to surrender its control to the all-merciful Lord Purushottama.  Thus, by sincerely following their instructions, we earn their blessings and eventually we are able to blissfully maneu 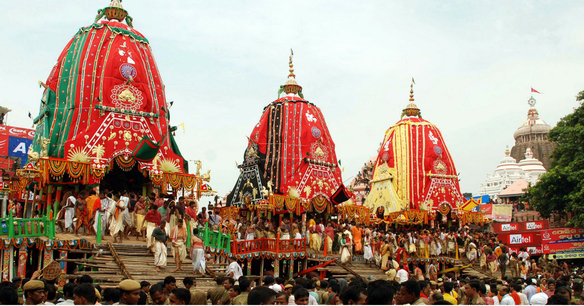 At the height of Indian summer, right at the beginning of the Monsoon, the Lord of Puri goes to his garden palace for the annual summer vacation. Originally the festival has its foundation in the residents of Vrindavan bringing back their Lords, Krishna, Balaram and Lady Subhadra from Kurukshetra.

Today in Puri He, the Lord of the Universe travels in some style from his temple in Puri, to his garden temple, located outside the town centre called Gundicha. Thousands of Hindus flock to see, and 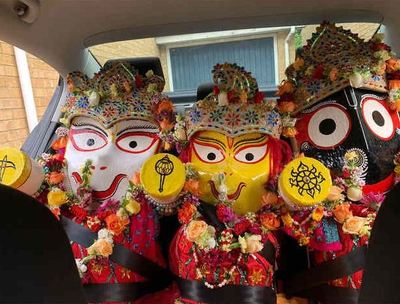 Croydon devotees decided to do the Rathyatra differently this year because of COVID 19 social distancing. We have had a wonderful Jagannath Rathyatra done in the car not in the cart.

Jagannath, Baldev and Subhadra went to 15 houses to give darshan to Their devotees in the car. The Rathyatra team had made a list of local devotees where Lordships could visit. The devotees were sent a WhatsApp message asking confirmation and their address. The time slot was given to everyone in which Lordships will 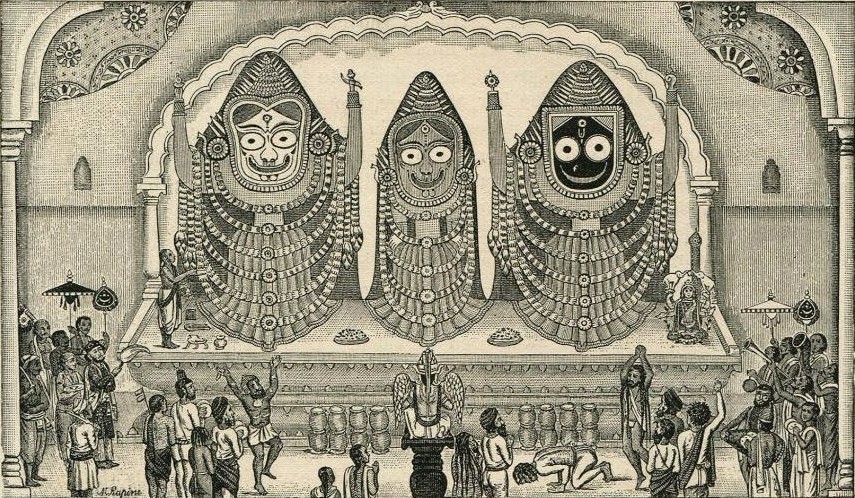 The history of the establishment of the great temple in Puri, and the hypocrisy of temple priests as opposed to sincere devotional worship in pure love of God. Written by the Thakur in English, 1871.

There is not a Hindu who has not heard the name of this temple. The old and the young, the male and the female, the Rajah and the ryot, and the weak and the stout, all visit this temple out of a religious curiosity. Three hundred and one miles south-west of the Vice-Regal palace at Calcutta, stands 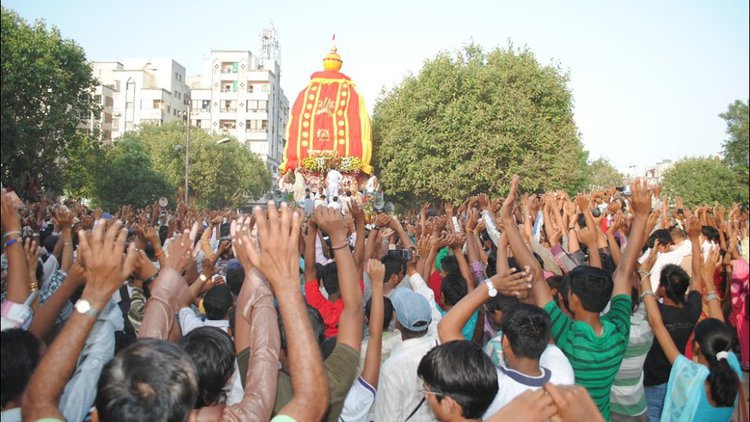 Bhubaneswar/New Delhi: With flames of protest erupting in Odisha over the untimely Rath Yatra organised by International Society for Krishna Consciousness (ISKCON) on the occasion of Basant Panchami in Mumbai, Yudhistir Govinda Das, national director of communications, ISKCON (New Delhi) has finally released a statement mentioning that the chariot fest of the Holy Trinity is being observed as per the scriptures. 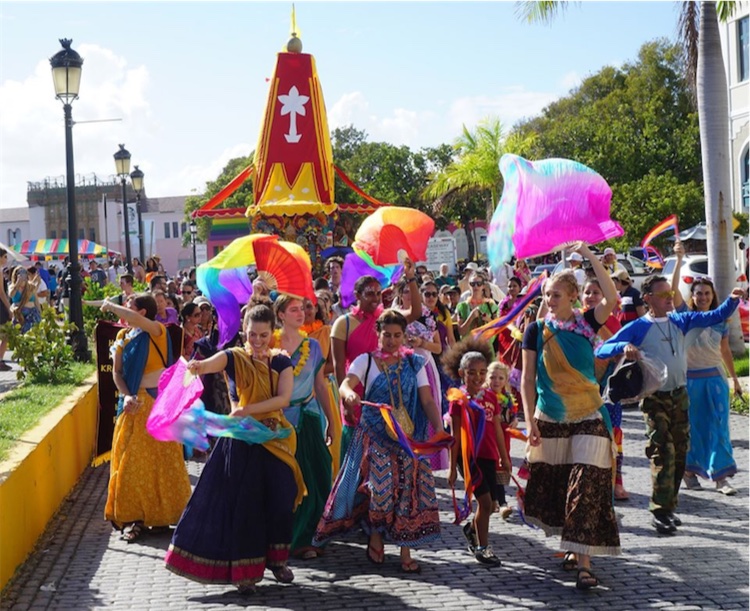 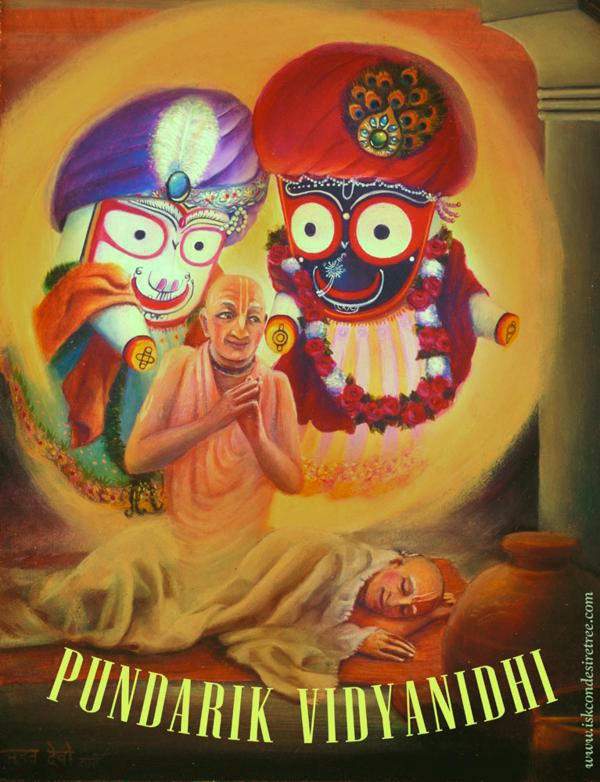 Today is Odana-sasthi, the date on which Lord Jagannatha is given a winter shawl. One year, when Lord Chaitanya and His associates celebrated this festival in Puri, Pundarika Vidyanidhi, who is Vrsabhanu Maharaja, Srimati Radharani’s father, in krsna-lila, received some special mercy. His experience is instructive for us all.

Srila Prabhupada explains, “At the beginning of winter, there is a ceremony known as the Odana-sasthi. This ceremony indicates that from that day forward,