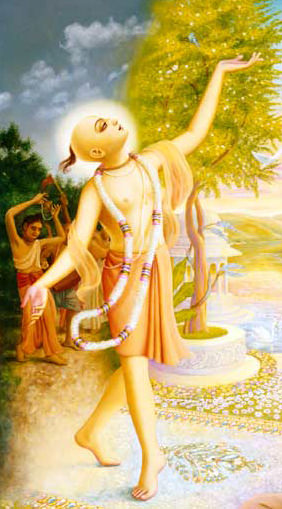 The Golden Avatar delivered the gold standard of spiritual practices for this age.

In general, people like gold. It represents wealth and success. A golden age refers to an era of goodness and plenty, acknowledged in Greek, Roman, and Indian cultures. If you have everything, you were born with a golden spoon in your mouth. The Golden Rule is the epitome of cosmic justice or fairness: Do unto others as you would have others do unto you. As the saying goes, “As good as gold.”

In Krishna consciousness we have the Golden Avatar, Sri Chaitanya Mahaprabhu, the best of divine incarnations. He is Radha and Krishna combined, and it doesn’t get any better than that. To be more specific, He is of golden hue because, though Krishna, He has taken on Sri Radha’s mood and complexion (radha-bhava-dyuti suvalitam). Thus, He is female and male, a particularly profound manifestation of the supreme. His golden complexion is emblematic of His intense beauty.

What’s more, Chaitanya Mahaprabhu brings with Him a snippet of the Golden Age. That is to say, within the darkness of Kali, the age of quarrel and hypocrisy in which we now find ourselves, we can access an age of love. It is a facsimile of Satya-yuga, a time, millions of years ago, when all beings lived happy and prosperous lives. Mahaprabhu Himself initiated this modern reflection of the Satya age when He appeared in India some five hundred years ago, and all who partake of His process—the chanting of God’s holy names—can avoid being victimized by the horrors of Kali. Instead, they can bask in the glories of prema, or love of God.

Prema is itself compared to gold. The Chaitanya-charitamrita (Adi-lila 4.164) tells us, “Lust and love have different characteristics, just as iron and gold have different natures.” The next text elaborates (4.165): “The desire to gratify one’s own senses is kama [lust], but the desire to please the senses of Lord Krishna is prema [love].”

One might compare lust to the misuse of gold or think of it as gold’s bad side. In the Srimad-Bhagavatam (1.17.39) we learn that gold can encourage falsity, intoxication, prostitution, envy, and enmity. Similarly, countless books and songs have been written about the pains associated with “love” in the material world, about the horrors of being betrayed or deceived, as when one’s beloved goes off with another.

How can something so pure lead to something so bad? The answer is that in this world when love leads to hardship and pain it is usually not love at all. It is, rather, lust, or love’s grossly materialistic counterpart. As in the Chaitanya-charitamrita verse already mentioned, we can understand the distinction between the two quite simply: When our love is egocentric, focused on our own gratification, it is merely lust—iron, not gold. And when it is theocentric, focused on God and in a spirit of selflessness, it is true love. Indeed, it is gold.

Even in the material sphere we can see that when we are selfless and giving in our relationships, they bear sweeter fruit. But still we can be exploited. The highest kind of love, then, is love of God. This is the true gold standard, for it takes us out of the world of exploitation and into the realm of dedication, where true love becomes the very fabric of our being: It is expressed towards God directly, and through Him to all living entities, who are brothers and sisters under God’s fatherhood.

In fact, it is this chanting process that makes this age truly golden. As Shukadeva Goswami says in the Bhagavatam (12.3.51), “My dear King, although Kali-yuga is an ocean of faults, there is still one good quality about this age: Simply by chanting the Hare Krishna maha-mantra, one can become free from material bondage and be promoted to the transcendental kingdom.”

But chanting, like all other forms of meditation, must be executed in the proper way. The seed of the sacred sound comes through a bona fide preceptor. Srila Prabhupada traveled to the United States in 1965 and shared the goldmine of the holy name by initiating people into Krishna consciousness, thereby making them shine like molten gold. Hari-bhakti-vilasa (2.12) tells us, “As bell metal can be transformed into gold when treated with mercury, a disciple initiated by a bona fide guru immediately attains the position of a brahmana.”

A Vedic text defines brahmana as “one who knows Brahman.” Knowledge of Brahman, spiritual truth, descends into the heart of a sincere disciple through hearing from a self-realized spiritual master and committing to the process he or she offers. This knowledge and commitment blossoms into divine love, making the disciple golden in every way. It is this blessing that the Krishna consciousness movement seeks to share with the world.