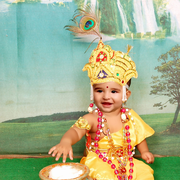 "Hari Hari BOl - thanks for sharing"

thanks a lot for the nice videos.

I was born in Brahmin family (Lacto Veg) in north India, and I was little bit religious inherently, and used to go to Temple etc. But since I come to UK in 2004 I started non veg, smoke, drink….but on the same time due to cosmopolitan culture of UK - I had been searching the Absolute Truth as I was wondering why so many religions, what the purpose of Human Birth? Why so many Gods? -----!!! I have had a chance to know about many different Scriptures and their beliefs, but I was not satisfied, and finally by the grace of Krishna, suddenly on one of the Sunday morning I woke up and asked my wife to go to Watford – Bhaktivedanta Manor (The late Beatles musician George Harrison gave the Manor as an offering of devotion to the founder of ISKCON, A. C. Bhaktivedanta Swami Prabhupada. Harrison had a close relationship with Prabhupada and met and stayed with him on several occasions. "Bhaktivedānta" is Sanskrit for "devotion-Vedanta", i.e. "the Vedanta which is about devotion".) And suddenly we all are agreed to go to Manor (along with my in laws and 5-6 month old baby), we went there and there was a programme going on where many different students from around the world were there….so it was crowded but one of the Mata Ji came to me and showed me the Manor and PrabhuPada ji’s personal room where he used to write books and did the Sadhna. After the completion of our visit, I asked her what do you do etc? She was a doctor in US and left everything behind and started serving Krishna by doing seva in Temple and studying Srila Prabhupada Ji’s books , Bhagvad Gita etc I asked her no. of question about The Absolute Truth, why so many Gods, so many religions etc? and she replied me very gently and perfectly based on Prabhupada Ji’s teachings , she also told me about Chanting, Hare Krishna mantra and she also arranged a Tualsi Beads mala for me and bag…and then she introduced me to one of the another senior devotee and then I asked him too many questions about – Personal /Impersonal Form of God, about other religions etc and He satisfied me with his answers but few questions were still in my mind , but I was very convinced with the KC movement , and I have done one round of chanting while I was in Manor with the Senior devotee and had prasadam too For next few days I was in touch with the senior devotee and asked few more questions he replied all of them very nicely and truly based on Bhagvad Gita and Vedas. Since then I have been trying to practice Krishna Consciousness.

Knowledge and Direction for KC