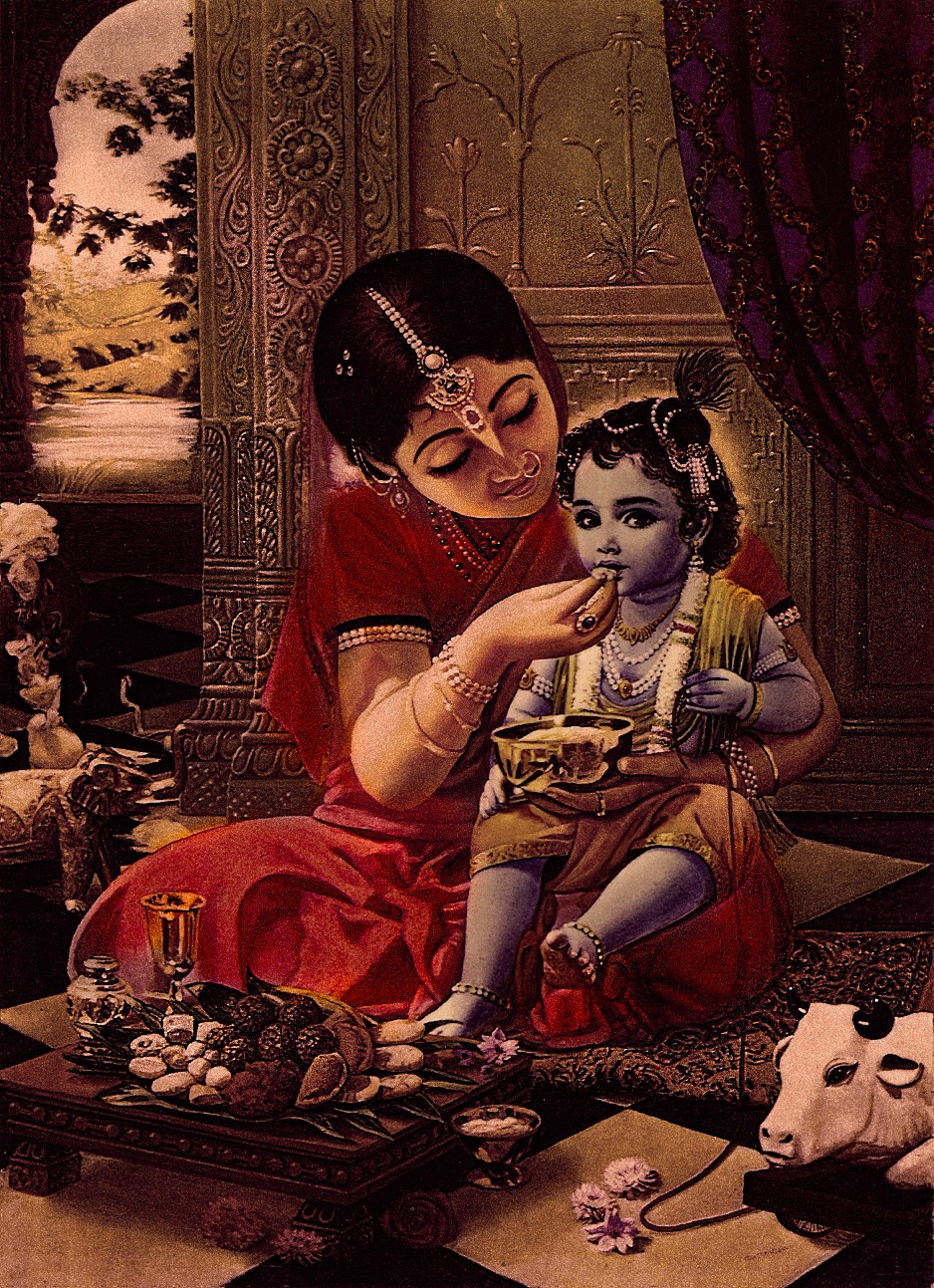 The Krishna consciousness movement vigorously approves this practice of preparing food, offering it to the Deity, and distributing it to the general population. This activity should be extended universally to stop sinful eating habits as well as other behavior befitting only demons. A demoniac civilization will never bring peace to the world… . When the people take to eating only prasadam offered to the Deity, all the demons will be turned into Vaishnavas… . It is then and then only that a peaceful condition can prevail in society.

Because prasadam is sanctified food and should be eaten with respect, we speak of eating prasadam as “honoring” or “respecting” it. Srila Prabhupada relished respecting the Lord’s prasadam and enjoyed seeing others do so. In early ISKCON days he cooked and distributed the Sunday “love feast.” And he kept a jar of syrupy gulabjamuns on hand for any of his spiritual children who might feel peckish. The sweets became known as “ISKCON bullets”—tasty weapons against maya. Prabhupada once popped a gulabjamun into his mouth and exclaimed, “We are eating our way back to Godhead!” Even in 1977 in Vrindavana, after months of fasting because of what would prove a fatal illness, Prabhupada called for his senior leaders, and in a faint, concerned voice he inquired, “Are the devotees getting enough prasadam?”

Once, after a festival in Mayapur, West Bengal, Prabhupada looked out from his veranda and saw some women and children licking used banana-leaf plates thrown on the rubbish heap. With compassionate intensity he said that no one within ten miles of an ISKCON temple should ever go hungry.

The Chaitanya-charitamrita offers detailed lists of preparations cooked for Krishna and then relished as krishna- prasadam by Lord Chaitanya and His devotees. Lord Chaitanya was concerned that prasadam should be served as nicely as possible, and He often served the devotees Himself. Of course, no one would eat until the Lord had begun, and so after serving everyone for a while He had to sit down and begin eating, as some of His senior followers continued serving.

With this background the members of the Krishna consciousness movement have been busy for the last thirty years cooking and distributing large amounts of prasadam, and therefore the movement has sometimes been referred to as “the kitchen religion.”

Prasadam, which literally means “mercy,” nourishes the body, mind, and soul. It can liberate anyone from material bondage and bestow krishna- prema, love of Godhead. Prasadam is so powerful because food offered to the Lord becomes transformed into a spiritual substance nondifferent from Him. In a purport to Bhagavad-gita (4.24) Srila Prabhupada explains how this is so: “The Absolute Truth covered by maya is called matter. Matter dovetailed for the cause of the Absolute Truth regains its spiritual quality.”

From this quotation we can see how the concept of prasadam extends beyond food to anything with a connection to Krishna. As soon as something or someone is connected to Krishna, it, she, or he becomes spiritualized—Krishna-ized.

The secret of this conversion is love. Krishna is attracted by the humility and love of His devotee. The spice of love is the tasty ingredient that induces the Lord to eat an offering. Devotees therefore try to do everything with love. Their words, thoughts, and actions are heartfelt.

The Chaitanya-charitamrita relates that the great devotee Madhavendra Puri saw his Deity, Gopala, eat a large offering of food and replace it with spiritual food, prasadam. Although the prasadam looked the same, the unoffered food had become transformed.

Srila Prabhupada says that to achieve the same result is very easy. “Even the poorest of the poor, without any kind of qualification,” can offer Krishna something, he says. If anyone offers even a leaf or a little fruit or water in “genuine love,” the Lord will be pleased to accept it.

We can develop the required love for Krishna in the company of those who already love Him. We get that company in two ways: by physical proximity to a pure devotee and, more important, by associating with a pure devotee’s instructions. So in the absence of the physical association of a devotee, when we, for instance, cook something at home under his direction, we are in his company. And when, with whatever love to which we have access, we make our offering to Krishna through such a pure devotee, we can be confident he will offer it to the Lord on our behalf and the Lord will accept it.

And one day, like these ever young boys and all other inhabitants of the spiritual world, we’ll have no need to eat to live. Our eating will be a way of relishing loving feelings. We will be so fully immersed in and saturated by pure love that we will have no use or need for anything else. Our bodies, composed of pure spiritual essence nondifferent from ourselves, will express our love for Lord Krishna and for one another. We will then know what it means to wear our hearts on our sleeves.

Until such a time, we can continue with confidence with our Krishna conscious practices and as often as possible respect prasadam in the company of family and friends. To help us honor Krishna’s prasadam with devotion, before we sit down to eat we can recite the following prayer by Srila Bhaktivinoda Thakura in Bengali, English, or both:

“O Lord, this material body is a lump of ignorance, and the senses are a network of paths leading to death. Somehow or other we have fallen into the ocean of material sense enjoyment, and of all the senses the tongue is the most voracious and uncontrollable. It is very difficult to conquer the tongue in this world. But You, dear Lord Krishna, are very kind to us. You have given us this nice prasadam just to control the tongue. So now let us take this prasadam to our full satisfaction and glorify Their Lordships Sri Sri Radha and Krishna, and in love call for the help of Lord Chaitanya and Prabhu Nityananda.”