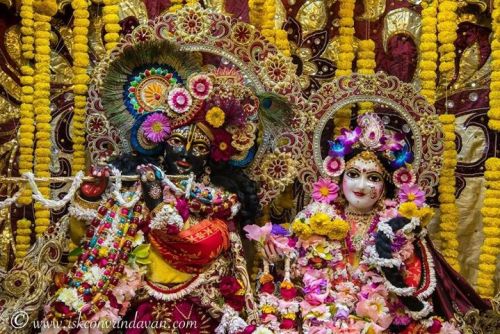 Just turn the pages of the history of India and you will come across the life stories of scores of eminent men and women who had all the means to enjoy their material life, but they willingly gave it up to pursue their spiritual goals. They weren’t satisfied just to satisfy the demands of their mind, senses and body. Animals do the same thing. Their conscience would constantly nudge them to look something which was not material and not ephemeral. They were searching for happiness which was not contaminated with pains and sufferings. They were looking for love which was utterly pure, not mixed with lust.

These spiritual seekers would either go to the forest or to the places of pilgrimage where they would intensely practice devotion to the Supreme Lord. Before embarking on their spiritual journey, they would distribute all their wealth among their family members and for themselves they generally kept some meagre amount. Their departure would mostly be a sombre moment because they and their family members knew well that this could be the last time, they are seeing each other. In absence of mobile phones, internet and other means of communications it was not possible to be in touch with the family members or get their audience in emergency. But their quest for spiritual enlightenment were so strong that they were willing to tolerate all difficulties and challenges.

This tradition, of visiting to the holy places in search for the Supreme truth, still continues in India even in this age of Kali Yuga. The scriptures describe Kali Yuga as the age of downfall because in this age, the eternal spiritual beings living in this mortal world by her own choice unfortunately become less interested in pursuing spiritual goals and become more interested in pursuing material goals. But it seems that Kali yuga is at its nascent stage, it is just 5000 years old, and so still we find innumerable people who have taste for spiritual life.

And so, if we go to any holy places, we find thousands of people there. When we live with the people who are gross materialists or are heavily influenced by the modern media, we start believing that life is meant just for sensual gratification. It appears as if this is what everyone else is doing and this is what we are also supposed to do.

But that is not true. There are still people intelligent enough to understand that this precious human birth should not be wasted for carnal pleasure but should be utilized to seek the higher truth.

I can say this because recently I had an opportunity to be in the company of thousands of such devotees who had congregated in Vrindavan to sincerely practice devotion to the Supreme Lord. All were in Vrindavan as part of Kartik Yatra which was organized by Iskcon Chowpaty, Mumbai under the leadership of HH Radhanath Swami Maharaj. There were around 7000 devotees who had registered for the yatra and there were few thousand others who too had joined but due to some unavoidable reasons had not registered for the yatra.
Vrindavan isn’t an ordinary place. It is the place where Krishna appeared. Scriptures and the learned scholars have declared unequivocally that Krishna is the Supreme Lord. Although externally it may appear just as any other city or town but if anyone spends some time in Vrindavan he will for sure fall in love with Krishna. Here not just the Vrajvasis, the fortunate residents of Vrindavan, but even the dust particles constantly and joyfully sing the names and glories of Krishna. Vrindavan is Krishna’s home. It is Radharani’s home. And we are told that this is also our home. A child lives where his parents live. And Krishna and Radharani are our father and mother, so we too belong to Vrindavan.

And knowing this to be the ultimate truth millions visit this holy place to revive their lost relationship with Krishna so that they can again get an opportunity to live in the kingdom of Krishna where there is no anxiety, no frustration, no enemies, no suffering, no disease and no death. In Vrindavan one lives forever in bliss in the company of Krishna.

And to attain that bliss thousands of devotees had come to Vrindavan in Kartik Yatra from different parts of India and from different parts of the world. The month was Kartik which is described as the holiest month of the year, the place was Vrindavan which is the best of the holy places in entire universe and so none of the sincere devotees wanted to waste even a single moment. The day used to begin before sunrise. At 4:30 am devotees would rush to Krishna Balarama temple to participate in morning arati (mangala arati) and to take darshan of the beautiful deities of Lord Krishna, Srimati Radharani, Balarama and Gaur Nitai. Immediately after the arati everyone would hurriedly go to Iskcon Goshala, which was the venue for the program, for breakfast. The breakfast would start at around 6 in the morning because devotees had to leave early to visit many holy places in Vrindavan.

For far off places several buses were arranged which would leave at around 7 am. And for the places which were near to the venue, Iskcon Goshala, devotees would go by walk performing sankirtan.

If thousands of devotees would have visited the same place at the same time it would have over crowded the place and would have created chaos. So the devotees were divided into different groups and each group was named after the eight principle sakhis (astaskahis) of Krishna – Lalita, Vishaka, Indulekha, Sudevi etc. Different groups would visit different places each day.

At each of the places a senior devotee would explain the significance and the pastimes associated with that place. By afternoon everyone would return to the venue so that no one misses the lunch.

One of the much-awaited programs was the evening class of Radhanath Swami Maharaj which would begin at around 5 pm. Thousands of devotees with rapt attention would hear him and he would effortlessly take us to the journey of Vrindavan narrating many sweet pastimes of Krishna. During the kirtan in the night everyone would immerse themselves in the divine sound of Hare Krishna Mahamantra, everyone would sing, and everyone would dance not for themselves but for Krishna’s pleasure.

And in Vrindavan how can one miss to do the parikrama (circumambulation) of the famous Govardhan Hill. One of the most famous life stories of Krishna is his lifting the Govardhan hill on his little finger for 7 days to save the Vrajbasis from the wrath of Indra. On the last day of the yatra we went for parikrama.
Thousands of us converged at Govardhan early morning. But we weren’t the only ones there were several other lovers of Krishna who too had come for the same purpose. The entire parikrama is around 21 km and takes around 6 – 7 hours to complete but if one also visits the many sacred places enroute to parikrama then it takes more time.

The bliss which we experience in devotion to Krishna cannot be described in words. It is million times more than the happiness which we get by satisfying the demands of body and senses.

Thousands of devotees from all over the world came together, chanted together, sang together, danced together, ate together and prayed together. This can be possible only when we keep Krishna in the centre of our life. Such an experience I would cherish throughout my life and when again an opportunity comes to be part of such yatra, I will surely go for it.