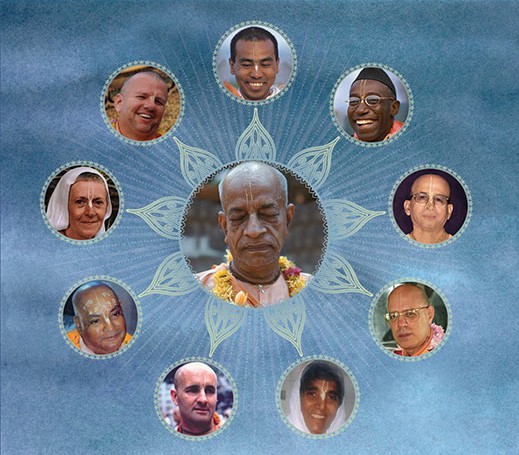 The sannyasa-guru who said that the departed Vaisnava had gone to Krishna or Gaura-lila realised that there was some explaining to do to make it clear for the audience – it was necessary. Yet, in the minds of some devotees, this sounded as if it was less of an achievement or something less important for the departed Vaisnava.

On the face of it, it does appear to fall short of being Back To Godhead. But if we consider how, when a departed Vaisnava does take birth again at a place where Lord Krishna or Sri Chaitanya Mahaprabhu perform Their pastimes within this material world (prakata-lila), that is a glorious thing. It is the same as going “Back To Godhead” because there is no difference between prakata and aprakata (hidden) lila.

“But why should there be another birth in this material world?” one may ask. Aren’t we taught to be acutely aware of “the perception of the evil of birth, death, old age and disease?” (BG 13.9) One may wonder of the efficacy or certainty of the Back To Godhead ethos otherwise.

For all of us averse to living upside down within a cramped womb for several months before yet another excruciating birth, Lord Krishna spoke these soothing words in Sri Gitamrta chapter eight to Arjuna, who asked: “O Krishna, Exactly what happens to such souls who obtain love for You? Do they take birth again?

Krishna: Yes Arjuna, but it’s not an ordinary one. They very happily take birth just like I took this wonderful birth in the house of Vasudeva. They are born happily without any problems just as My eternal associates do. They take one more birth and participate in My manifest pastimes. These great souls are the highest and achieve the ultimate perfection — My own planet.”

This assurance of a pleasant birth at a place where Krishna or Gaura-lila happens, should also add to the magnificence of such a rebirth destination – it is elevated and again, most glorious. Yet another doubt might creep in as we might say that this is a destination for sadhana-siddhas (Those who achieve spiritual perfection through sadhana-bhakti). “This is still not the same as going Back To Godhead, as promised by Srila Prabhupada.”

We all practice sadhana-bhakti, and to achieve perfection in it by taking another happy birth enables a Vaisnava/i to associate with and obtain blessings from those eternally liberated souls forever serving with the Lord. In this regard, Srila Visvanatha Cakravarti Thakur explains:

“In this context we will make our analysis according to the method described in Srila Rupa Gosvami’s Ujjvala-nilamaṇi. There are two categories of gopis: the eternally perfect (the nitya-siddhas) and those who have become perfect by practicing bhakti-yoga (the sadhana-siddhas). The sadhana-siddhas are of two categories: those who belong to special groups and those who do not. And there are also two classes of the gopis belonging to special groups: namely the sruti-caris, who come from the group of the personified Vedas, and the rsi-caris, who come from the group of sages who saw Lord Ramacandra in the Dandakaraṇya forest.” (SB 10.29.9 purport)

Although reference is made of the gopis of Vraja, the same principle of categories of sadhana-siddha and nitya-siddha applies for other stayi-bhava (permanent relationships with the Lord) as well. For those of us who think this type of rebirth is inferior to going Back To Godhead, Srila Visvanatha Cakravarti Thakur further says:

“’It is understood that some of the gopss are personified Vedic literatures, while others are reborn sages, daughters of cowherds, or demigod maidens. But by no means, my dear King, are any of them ordinary humans.’ Here we are informed that although the gopis appeared to be human cowherd girls, they actually were not. Thus the contention that they are mortals is refuted.” (SB 10.29.9 purport)

Given the information above, we may want to know what did Srila Prabhupada actually mean when he said that certain of his disciples – or anyone else for that matter – had gone Back To Godhead. Were his statements also ‘loaded’ and that he said Back To Godhead just to keep things simple?

In several places in his writings, he did offload such ‘loaded’ information. For instance; ““After giving up the body, the devotee who becomes perfect in devotional service enters that particular universe where Lord Ramacandra or Lord Krishna is engaged in His pastimes. Then, after being trained to serve the Lord in various capacities in that prakaṭa-lila, the devotee is finally promoted to sanatana-dhama, the supreme abode in the spiritual world.” (SB 9.11.22 purport)

Sanatana-dhama here refers to that hidden aprakata place called Godhead. It could be the case that a Vaisnava not inclined towards Goloka Vrndavana can go Back To Godhead by entering Vaikuntha, where sadhana and awe and reverence predominate. Depending on the mood of a Vaisnava leaving the body, he or she can instantly go Back To Godhead in Vaikuntha.

For us followers of Srila Prabhupada, he is steering us in a particular direction towards Goloka Vrndavana. Since it is known that Krishna is reluctant to award deep Bhakti because it means to give Himself, we can understand that it is not so easy to enter Goloka Vrndavana unless eternal residents there favour us. Srila Prabhupada is one of those residents.

Whether it takes us many births or one more happy birth to achieve Goloka Vrndavana, we should count our blessings for at least being shown the way there. While trying to be sincere in devotion to the Lord, we can again be encouraged by how Krishna loves His devotees:

“Such learned souls, who desire eternal association with Me by meditating on My transcendental form, to them I carry what they lack and preserve what they have. Although they do not desire anything from Me, I still provide it. Even the burden of maintaining their body is carried by Me as a householder takes care of his own family.

Arjuna: What kind of devotees are they who let you carry their needs on Your head, Krishna?

Krishna: They have not given Me this burden. I take it by My own sweet will. I can create universes, so this is not a burden for Me. Rather I do it out of love for them. Just like a young man who loves a young girl carries his beloved lady on his shoulders, in the same way I take pleasure from carrying the needs of My devotees.” (Sri Gitamrta, chapter nine)

For those who are struggling in Krishna consciousness and have lost all hope of going Back To Godhead, we can gather strength and confidence from Krishna’s eternal promise:

“Arjuna: You deliver only Your devotees and bring them to You, not the non-devotees. Does this mean that You also have attachment and aversion?

Krishna: No, I’m not partial, but My devotees are in Me, and I am in them. Actually I am in everything, and everything is in Me. My devotees are attached to Me, but others, have no dealings with Me. Practically speaking, for them I do not exist. Actually there are so many living entities and I maintain everyone therefore I am equal like rain. But some trees watered by the rain give sweet fruit and others give bitter fruit. That is not a defect of the rain. It is their nature, it is not My attachment and aversion. I am rewarding equally, but My devotee gets special treatment, so much so, that even if he commits the most abominable action — if he’s still determined to serve Me — I do not reject him. Rather, he is still to be considered saintly.

Arjuna: Yes, I accept that he is a sadhu when he’s worshipping You, but if he’s doing nonsense, then he is not a sadhu.

Krishna: No Arjuna, in every regard he’s a sadhu because he’s properly resolved to serve Me. He’s thinking that, “I am unable to give up this sinful activity and I’ll probably go to hell, but I’ll never give up devotional service to Krishna.” Therefore I consider him a sadhu.

Arjuna: But how do You accept the service of such an irreligious man whose heart is polluted by lust, anger and greed? Aren’t his offerings contaminated by these things?

Krishna: He very quickly becomes righteous and I accept him because he laments, remembering Me again and again. And because of lamentation his heart burns and he thinks, “Alas, Alas! there’s no other devotee lower than me. I’m a black spot for devotees”. Again and again he curses himself, and becomes purified due to this repentence. Or you can take it in this way, Arjuna. Such a person even when committing sins, his righteousness existed in him in a subtle form. He’s taking the medicine of devotion although the fever remains. He is not afraid, for he knows that the fever of improper activities will go away by the power of devotion. The sinful acts are like snakes with the fangs removed. Thus he obtains eternal peace, for his lust will go away and never return.

Arjuna: I understand that You are saying that he will become righteous. There is no dispute. But if he remains sinful and does abominable activities, do we still consider him a sadhu during his life?

Krishna: [Krishna becomes angry. His eyes become enlarged.] My devotee never perishes! Even if he dies, he does not become degraded.

Arjuna: [In great worry] Many people will not agree. [He becomes morose] How can I help them to understand?

Krishna: Take mrdangas, take karatals and drums and bang everything loudly. Go…go wherever they are speaking like this and raise both hands in the air and make a vow. Take an oath in My Name and say this:

“The devotee, the Lord’s devotee, even if improperly behaving shall never perish!” (Sri Gitamrta, chapter nine)