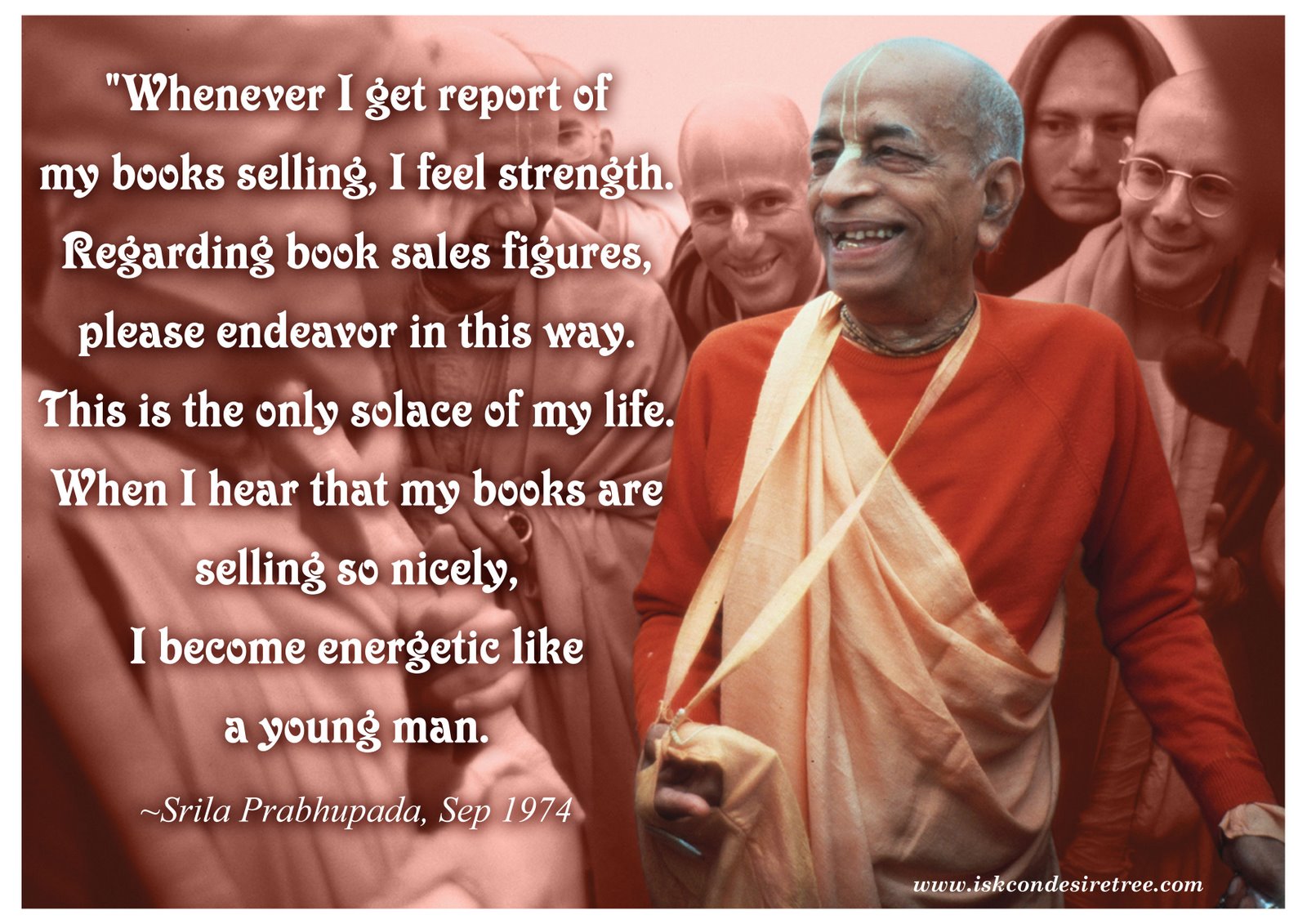 Hare Krsna Pabhuji/Mataji,
Please accept our humble obeisances,
All glories to srila prabhupad,
All glories to sri guru and gauranga ,
An Unlikely Hero in the World of Sankirtan  - By HG Vijaya (das) HDG (USA).
Ayodhya Dasa, a devotee of Indian descent, joined ISKCON in 1976 in Detroit and was initiated by Srila Prabhupada in 1977. While in Detroit he distributed books while serving in the life membership department. But for many years he wanted to go to Vrndavana. In 1995 Krsna made the arrangement. That year his brother-in-law passed away in India and he was asked to attend the funeral ceremony because he was the only surviving male in the family. He took the opportunity to visit Vrndavana. He loved Vrndavana and decided he would move there. Dina Bandhu Prabhu told him that Prabhupada wanted his books distributed on the trains and encouraged Ayodhya to try it. He did, and though he didn't distribute many books he got a taste for book distribution. He was also going shop to shop in Vrndavana and various towns near Vrndavana, but then he started distributing exclusively on the trains. He liked the trains for three reasons: one, because the people had laxmi; two, because they were sitting there with nothing to do; and three, because there were different people every day. He began traveling from Mathura to Delhi and back every day.

Every morning he looks forward to going out again to distribute Srila Prabhupada's books. He doesn't take a day off. He even goes out on Janmastami -- and he's 76 years old! But in the summer he goes to the West because it's so hot in India and his wife and family are in the West. He's especially inspired by Srila Prabhupada's statement "If you want to please me, then distribute my books." Upon hearing that for the first time, he thought, "This is something I can do. There are not many other things I can do, so it's Krsna's mercy that I can do something that is pleasing to Prabhupada and Krsna." Ayodhya Prabhu likes to recall how he sold a Srimad-Bhagavatam volume to an Indian gentleman who was later initiated as Rasaraja Prabhu, one of the leaders of the Bhaktivedanta Institute.
When Ayodhya distributes the Bhagavad-gita he tells the person,this Bhagavad-gita is no ordinary book. Although it is 5,000 years old, it is still famous all over the world, and although so many Bhagavad-gitas had been translated into other languages and read all over the world before this one, no one became a devotee of Krsna. But this 'Bhagavad gita As It Is' has made thousands of devotees of Krsna all over the world."
Sometimes he tells the customer, "I don't think you are going to buy this book, but at least look at the quality of the printing." When they look at the nice quality of the book, they quite often buy it. Reverse psychology.
Ayodhya Prabhu says, "To distribute books is not easy. You have to be humble, tolerant, and patient. Once I was showing a book to a Muslim. I was detached, but I was trying. The man said, 'I'm a Muslim. I'm not interested in this book. But because of your gentle behavior, I will buy this book from you."
Ayodhya Prabhu has dedicated his life to book distribution and wants others to also get the mercy by distributing books. He says, "Devotees who retire can go to India or anywhere and distribute books. What good is playing with the grandchildren and all that? To distribute books is austere, but it is also very sweet. The austerity brings the satisfaction. Book distribution is very nice. Prabhupada once said, 'You can hire a cook, you can hire a pujari, you can hire a cleaner, but a preacher you cannot hire, because that comes from the heart.'"
Tags: ayodhya prabhu, bhagavad-gita, book, distribution, iskcon, prabhupad, vrindavan
E-mail me when people leave their comments –
Follow