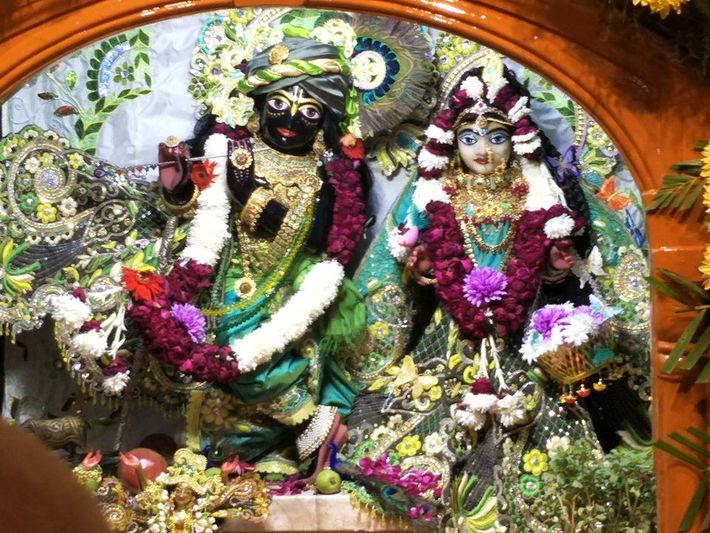 On the 1st of November, 2019, HH Gopal Krishna Goswami Maharaja along with several senior Prabhupada disciples and many other ISKCON Devotees, formally inaugurated the ISKCON temple at Chippiwada for the benefit of general public. Located near the Juma Masjid, Asia’s largest active mosque, at Old Delhi, a fabulous festival of unprecedented proportions was celebrated with the inauguration of Srila Prabhupada’s Museum and the installation of Gaura Nitai deities.

Like Sudharma the Lord’s assembly hall which could expand immeasurably as per the size of the assembly, it appeared as if miraculously, the seemingly narrow walls of ISKCON Chippiwada, had expanded to accommodate the nearly 30 Srila Prabhupada disciples and hundreds of other devotees and faithful who attended the Temple inauguration ceremony at ISKCON Chippiwada On 1st November 2019 ! 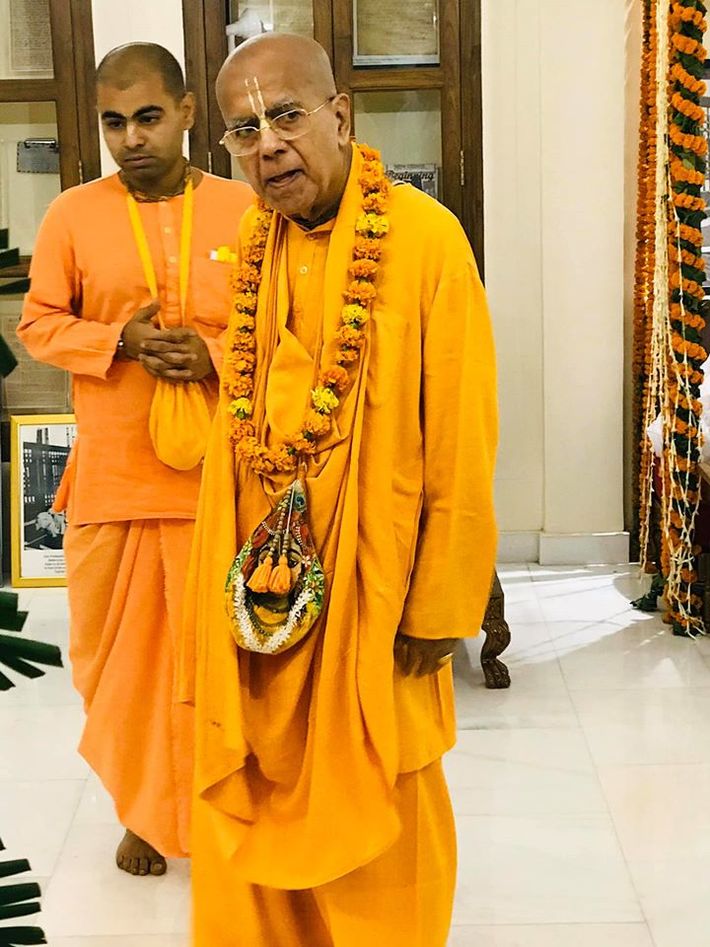 By the sincere efforts of HG Raghava Pandit Prabhu and HG Radha Kinkar Prabhu, the property was duly registered in the name of ISKCON in 2012, a good 35 years after Srila Prabhupada’s departure, under the leadership of HH Gopal Krishna Goswami Maharaja! By the generous financial contribution and managerial support Mr. Vinod Jain and the sincere efforts of HG Neelakantha Prabhu the Center Manager, the entire temple has been renovated, and transformed into a sparkling, opulent piece of spiritual architecture. 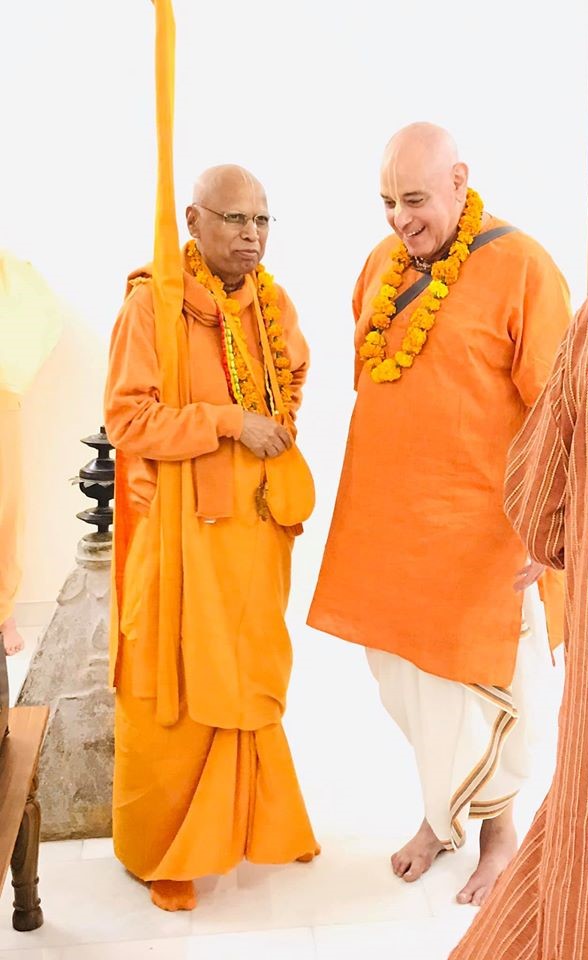 Srila Prabhupada’s Museum was inaugurated on the same day and had all his disciples soaking in the atmosphere, reminiscing his glorious pastimes and expressing astonishment at how he had managed with so little facilities to flag off a global movement where each of them had got connected by the Lord’s arrangement. This museum displays his original Harmonium, several original letters related to Chippiwada and otherwise, and a copy of his passport which he had carried when he had left for the United States, by the Jaladuta and many other memorabilia. There is also a magnificent display of Srila Prabhupada’s books in 60 different languages of the world! Adorning the walls further are some truly memorable sketches by his disciple HG Bhakti Siddhanta Prabhu and photographs from his unparalleled life that will be a sure draw for the community of devotees and the general populace. Many of the guests made entries in the Visitors’ book as well.

Here are a few contemplations from Srila Prabhupada’s glorification by his disciples and other senior devotees. 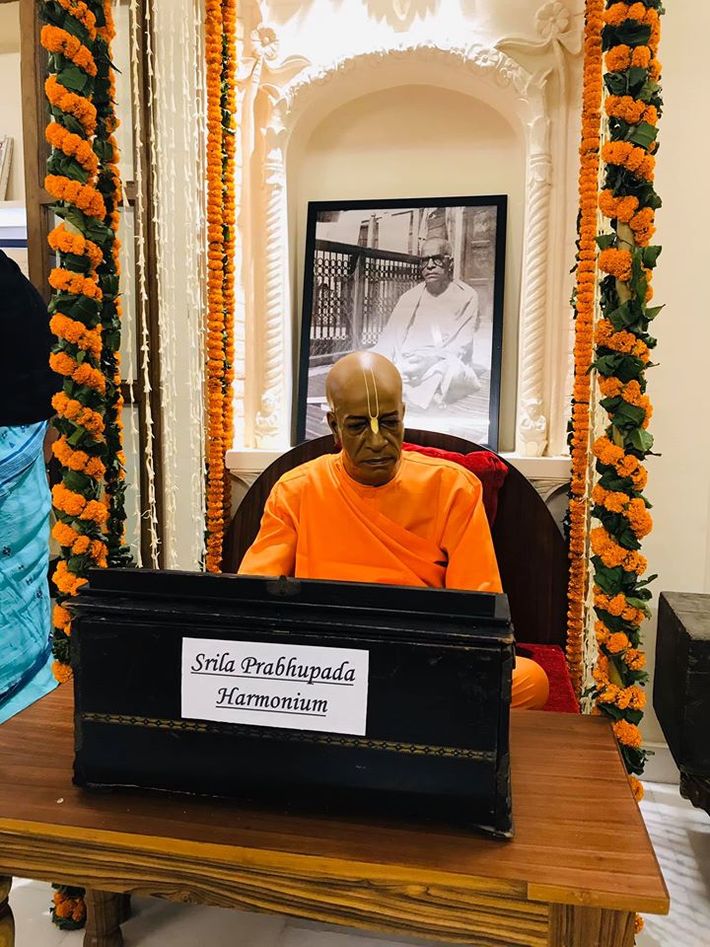 “When I was a young girl I actually visited this temple to see the pastimes of Srila Prabhupada, and so I know what it looked like, and I know the wonderful job that has been done now. I was very impressed and so happy, that this piece of ISKCON history is actually now in the care of ISKCON.”

“One of things that attracted me the most when I joined ISKCON was the cover of Srimad Bhagavatam First Canto and it was at this place that Srila Prabhupada had got it printed. Srila Prabhupada had an amazing spiritual vision. He was actually doing this for you and me.”

“This wonderful temple is located right next to the Juma Masjid. Srila Prabhupada once remarked that he will personally take on his head, the dust from the feet of the devotees who could preach to the people of a certain community.”

Every one of Srila Prabhupada’s disciples and senior devotees like HG Revati Raman Pr- GBC and Temple President of ISKCON Tirupati, HG Braja Hari Pr- ISKCON Bureau EC member and Temple President of ISKCON Mumbai-Juhu and HG Braja Vilas Pr- The Chief Coordinator of the TOVP Fund Raising team glorified Srila Prabhupada, his infinite sacrifices which started from Chippiwada and how he had touched their lives. The surrender and sincere efforts of HH Gopal Krishna Goswami Maharaja, the GBC of nearly 17 temples in ISKCON Delhi-NCR as envisioned by Srila Prabhupada was appreciated by all the senior devotees. Maharaja on his own part gave all the credit to Srila Prabhupada and his selfless struggles from Chippiwada. Prabhupada was living here in such a poor, humble place. It wasn’t even clean. Starting from here , Srila Prabhupada built a house the whole world could live in and a global conglomerate of nearly 700 temples, restaurants, schools, farms, hospitals etc.But this is where it all began!

Srila Prabhupada’s Desire to have the Chippiwada temple in ISKCON:

From the intensely busy Chandni Chowk, Bhaktivedanta Swami would take the short walk to Chippiwada, past the Red Fort, keeping the Gaurī-Śaṅkara temple on his left, then proceeding along a side street past the large, imposing Jama Mosque. Near Chippiwada the streets would become narrow.

Even as the volume was being printed, he was still writing the last chapters. When the proofs were ready at O.K. Press, he would pick up the proofs, return to his room at Chippiwada, correct the proofs, and then return them. In the last months of 1962, Bhaktivedanta Swami usually made a daily walk to O.K. Press.

“On October 9, the day Prabhupāda started for Calcutta, he left behind a different kind of letter for Sri Krishna Pandit. Prabhupāda had been negotiating with Sri Krishna Pandit to purchase the Chippiwada temple for ISKCON or at least to rent the single room through a formal contract. Prabhupāda wanted the room as a Delhi headquarters for printing his books.”(Srila Prabhupada Lilamrita, Satsvarupa Das Goswami)

54 years from then, Chippiwada now has a full fledged ISKCON Temple, where ISKCON began in one sense, where it all began!