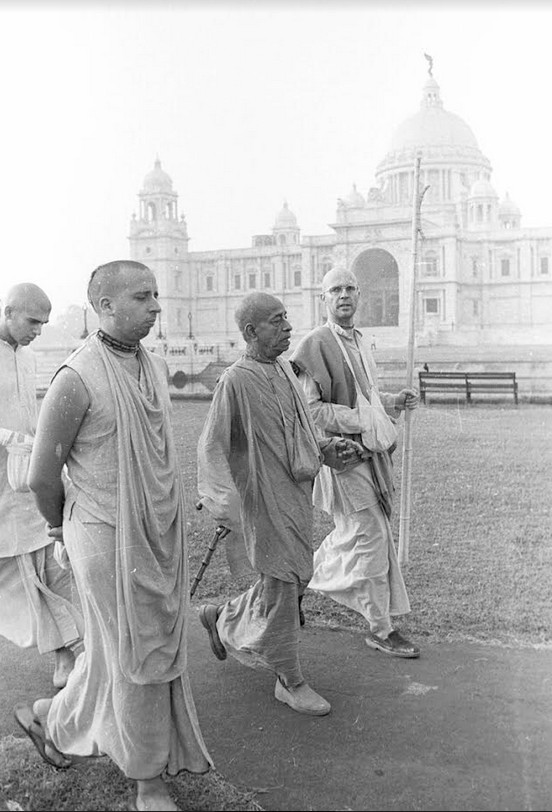 Hari-sauri: The biggest one, I think, was that centennial, bicentennial issue. What was that? It increases, anyway, every year.

Prabhupada: Brahmananda was hesitating how 20,000 per month we shall consume.

Gargamuni: Yes, we were all afraid.

Prabhupada: [laughs] I said, “Yes. You order. We shall consume.” Then this Tamala Krsna, he helped.

Hari-sauri: He was in book distribution from the start.

Gargamuni: From their sales they were sending.

Prabhupada: Yes. He gave impetus for distribution. Then we got encouragement—other party, another party. Where those mimeograph machine gone?

Gargamuni: I don’t know. After I went to San Francisco… They should be preserved. That was beginning. We could still use them.

Prabhupada: Yes. I paid $150 I had collected. They wanted hundred dollars each or $125 each. So I went there, that I want two machines, but I have got $150 dollars only. So he wanted to throw away the machine. “All right, you take two machines.” So I gave $150 and took away two machines. I think it is more costly. Eh?

Gargamuni: Yes, oh, yes. Those are heavy-duty machines. They were old, but they were good.

Prabhupada: No, they were working nicely. And the printer was that boy?

Prabhupada: Ranchor. Spoiling so much paper.

Gargamuni: Yes, so much.

Prabhupada: He brought $500 from his grandfather.

Prabhupada: Once he gave me. Anyway, Krsna is giving us encouragement. Prabhupada: And so beautiful printing, picture and… The beginning was three hundred, and Gargamuni, he took away somebody’s hand cart.

Tamala Krsna: He what?

Prabhupada: It was on the street.

Prabhupada: And he was putting the magazines on the hand cart, selling near cinema and other crowded places. That is very good… So it was a hard struggle in the beginning…

Prabhupada: Then I started this Back to Godhead, Hayagriva and Rayarama, editors. And I purchased two machines. What is that?

Prabhupada: There was advertisement. So I went to Long Island. That two machines… I asked, “What is the price?” “$150 each.” Then he wanted to take away the machines. Machine was all right. And then I told him that “I have got $150 only. If you want to give us, give those two machines.” So “All right, you take these all.” (laughter) So I gave him $150, whatever I had, and I took the machine. In that machine was printed Back to Godhead. So five hundred copies… How many copies you were selling?

Prabhupada: Oh, yes. Then I asked Brahmananda that “Why not print it nicely?” So he said that “Unless we print twenty thousand, nobody will take this work.” And “All right, order twenty thousand.” Now, from twenty thousand or five hundred, what is the quantity now we are printing?

Tamala Krsna: Not less than five hundred thousand a month.

Prabhupada: And so beautiful printing, picture.