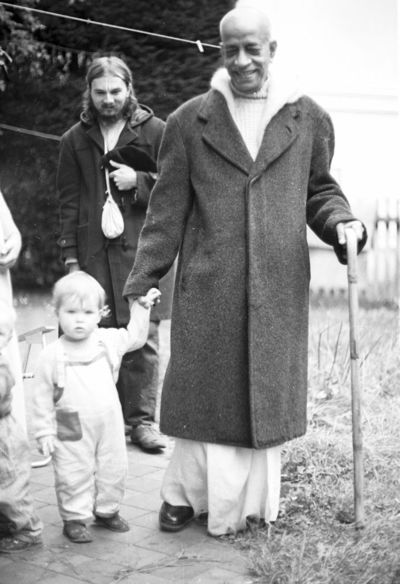 An interview with Giriraj Swami by the ISKCON Strategic Planning Office, July 9, 2020, via Facebook.

Gauranga Dasa: Hare Krishna. We welcome all the devotees who have joined this weekly care conversation, Vaishnava seva. This week we are very honored to have with us His Holiness Giriraj Swami Maharaja. We welcome His Holiness Giriraj Swami Maharaja, who is one of the most senior of Prabhupada’s disciples. He was very active on the GBC, and was one of the founders of ISKCON India, especially the Juhu temple. He spent many, many years serving Srila Prabhupada very closely, and has hundreds of remembrances of Srila Prabhupada, and he is just about to publish his book about the Juhu ISKCON temple.

Today our topic is “Srila Prabhupada as an Embodiment of Devotee Care.” So, thank you, Maharaja, for joining us. I would like to begin by asking, from your experiences with Srila Prabhupada, could you share any anecdote or exchanges in which he demonstrated care for the body or concern for the devotees’ health?

Giriraj Swami: There are a number of instances, some involving me and some involving others. One notable one involved Yamuna Devi from after the first Delhi pandal, at Dalmia Bhavan, which she describes in Yamuna Devi: A Life of Unalloyed Devotion:

“[I]t was a very crowded situation—perhaps ten to fifteen of us in one room—and the only place free was the bottom shelf in one of the walk-in closets. We had all of our paraphernalia piled up, and I was in a sleeping bag down on the bottom shelf. Srila Prabhupada noticed I was missing, and I was later told that he had inquired many times where I was.

“One day I became aware of the door being opened, and I turned to see Srila Prabhupada’s lotus feet walking into that closet room. . . .  He placed his hand on my head and inquired, ‘Yamuna? How are you doing?’ Firstly I said, ‘I am always thinking of you, Srila Prabhupada.’ Then I explained my symptoms, and he said, ‘I think this is jaundice . . .  Now I will take charge of your recovery. You will never get well in these conditions on the floor.’

“Srila Prabhupada had a hospital bed brought in for me and moved me into a room right next to his, with floor-to-ceiling windows, neem trees outside, and a fan. And I remember being propped up in this bed, and he came in every day to check on my progress.

“He also called in an Ayurvedic doctor and gave me a diet for jaundice. He said I had to take something called petha, a wax gourd or a white kind of pumpkin taken raw. It’s covered in a thick layer of caramelized sugar, so to me it looked like a ghastly thing to eat. Srila Prabhupada said, ‘This is your medicine. You have to eat it every day; and you also have to drink sugarcane juice.’ So, I remember the first time I took a bite of petha; it tasted like the most bitter, horrible thing because, of the jaundice. Srila Prabhupada would personally stand and watch me eat the petha, and he would actually smile and chuckle.”

So, that was an example from her experience. I have a small example from mine. We were in Juhu, and I used to go to the city all day long and come back at night and report to Srila Prabhupada. One evening after a long day in the city, having, as usual, traveled there and back in the crowded trains and to and from the train station in a crowded bus and not having had anything to eat since morning, I staggered up to Prabhupada’s room, exhausted.