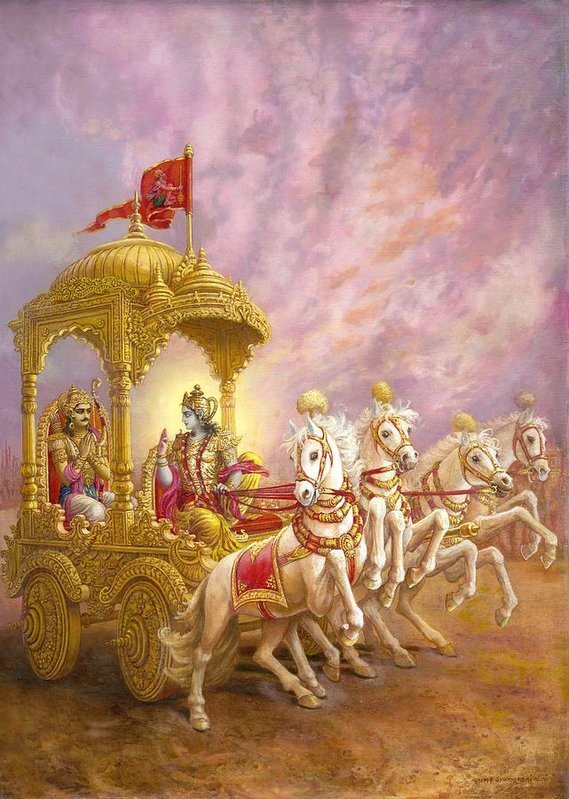 On Gita Jayanti, the day of the advent of the Bhagavad-gita, spoken by Lord Krishna to Arjuna, I reflected on Srila Prabhupada and how he addressed members of the Gita Pratishthan (Gita Foundation) in India, in 1976. The way Srila Prabhupada dealt with the conference was exemplary and extraordinary as I shall relate.

In May a prominent industrialist named Ramkrishna Bajaj (almost everyone in India knows Bajaj Autos and Bajaj Electricals) wrote Srila Prabhupada that he was organizing a conference under the banner of the Gita Pratishthan, to promote the preaching of the Bhagavad-gita, and that he wanted Srila Prabhupada, as the world’s foremost preacher of the Gita, to attend. Srila Prabhupada, however, did not want to join, because although the purpose of the conference was to discuss how to preach the message of the Gita, he was concerned that different participants would have different ideas of what the message of the Gita was. The meeting would host many Mayavadis (impersonal speculators) who preach in the name of the Bhagavad-gita that people can become Krishna, that they can merge and become one with God. Then, who would decide what the actual message of the Gita was? So, Prabhupada considered, “What is the use of my going and wasting time, with no conclusion?” Rather, he asked me to go on his behalf.

In his letter to me, Srila Prabhupada wrote that we must insist that the Bhagavad-gita be presented as it is and that people not use the words of Krishna simply to make money or to promote their own philosophies. “If they have got their own philosophy, then let them preach their own philosophy, but not in the name of the Gita.” And he gave an example: “Suppose a man wants to smoke ganja [marijuana], but he does not want to be caught. So he takes a friend’s hand and smokes it in his hand, and then when the authorities come he says, ‘Oh, I have not smoked ganja. See, my hands are clean!’ The idea is that if one wants to preach the Gita, then he must preach it as it is. Otherwise, don’t use the Gita.” (In other words, don’t preach your own concocted philosophy and present it as Lord Krishna’s.)

Eventually, Mr. Bajaj came in person to appeal to Srila Prabhupada to attend, and Prabhupada finally agreed. And so, in December, we went to Wardha, near Nagpur, in Maharashtra, in the center of India.

Most of the Bajaj family members were followers of Vinoba Bhave, a prominent freedom fighter under Mahatma Gandhi. And Ramkrishna’s father, Jamnalal Bajaj, had been Gandhi’s treasurer. So, every day Srila Prabhupada and his party would take prasada on the veranda of the house where Mahatma Gandhi, Jawaharlal Nehru, Sardar Vallabhai Patel, and Jamnalal Bajaj all used to take their meals. And Mr. Bajaj would point out where each of them sat, as we sat in the very same places.

On the main day of the conference, and all the participants went to Vinoba Bhave’s Paunar ashram. When Srila Prabhupada addressed them, his argument was clear and simple: Krishna preached the Bhagavad-gita to instruct people to become devotees (man-mana bhava mad-bhakto), and how do people become devotees? By chanting the Hare Krishna maha-mantra (harer namaiva kevalam). Therefore, those who want to preach the message of the Bhagavad-gita should propagate the chanting of the holy names of Krishna - Hare Krishna Hare Krishna Krishna Krishna Hare Hare/ Hare Rama Hare Rama Rama Rama Hare Hare because that will fulfill the Lord’s purpose in the Bhagavad-gita.

Then Srila Prabhupada took his karatals and began to chant Hare Krishna, which infused the meeting with tremendous spiritual energy, especially after so many impersonal speculators had just spoken. The kirtana wasn’t in the schedule, and Srila Prabhupada didn’t take anyone’s permission (not that he had to); still, he was very tactful, and before the audience could become impatient, he stopped the kirtana in what had been a most dramatic interlude.

On the last day, there was to be a meeting of all the invitees to discuss practical programs for promoting the teachings of the Gita, and the organizers told Prabhupada that they would invite him when they were ready to present their proposals to him. Later than expected, they finally invited him to come.

When he entered the meeting room, everyone had to pay heed to him because he was the most senior preacher of the Gita in the world, and from every point of view - age, learning, success in preaching he was the leader. When he spoke, he stuck to one point: parampara. Unless you follow the disciplic succession and present the Bhagavad-gita as it is, without personal interpretation, you have no right to preach the Bhagavad-gita. “You can preach any philosophy you like,” he told them, “but don’t take the name of Bhagavad-gita.” And he explained his success: “There is no interpretation. Krsna says, ‘I am the Supreme.’ Mattah parataram nanyat. We are presenting, ‘Here is God.’ You are searching after God, Krsna, and they [foreign devotees] are accepting. . . . How they are accepting? Because it is the real thing, there is no interpretation.”

Of course, no one could really refute what he was saying.

Even then, Srila Prabhupada repeated the same message to Mr. Bajaj one can lead others only if he follows the supreme leadership of the Supreme Lord Sri Krishna, through parampara.

Tags: srila prabhupada, gita, gita jayanti, the advent of the bhagavad-gita, bhagavad-gita
E-mail me when people leave their comments –
Follow