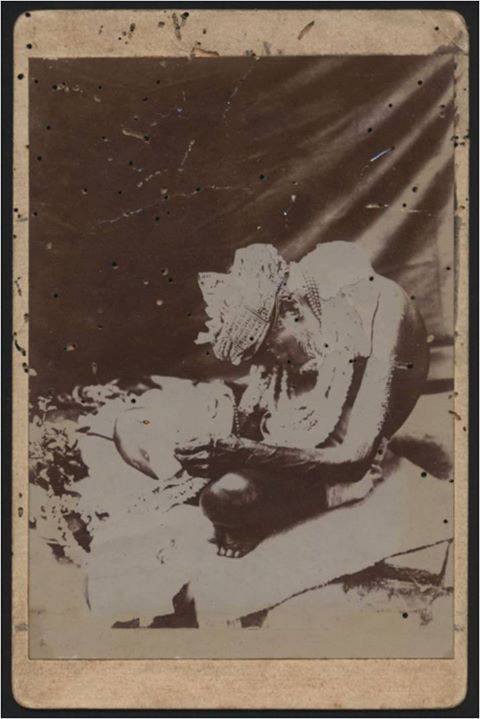 (Bhaktivedanta Research Centre: This is a one of a kind original photo of Srila Jagannath Das Babaji Maharaj found by BRC while going through Sri Sundaranand Vidyabinode’s collection.)

Today is Srila Jagannatha dasa Babaji Maharaja’s disappearance day. He comes in the Gaudiya Vaishnava disciplic succession after Srila Visvanatha Cakravarti Thakura and Srila Baladeva Vidyabhusana. He was a renounced ascetic, fully engaged in chanting the holy names of Krishna and meditating on His pastimes. For some time, he made his residence at Surya-kunda in Vraja-dhama, near the temple of Suryadeva, where Srimati Radharani used to come and worship the sun-god—or, I should say, where She used to come to meet Krishna on the pretext of coming to worship the sun-god.

Srila Bhaktivinoda Thakura told them, “Actually, your Gurudeva’s instructions are right for you. Because you still have anarthas, for you to try to sit and do nirjana-bhajana [solitary worship] and practice asta-kaliya-lila-smarana [meditation on the Lord’s eightfold daily pastimes] would be artificial, and you would just become degraded. So you should follow your Gurudeva’s instructions with full faith and work hard in Krishna’s service. Then, in time, you may be able to chant the holy names purely.”

Eventually, Jagannatha dasa Babaji Maharaja moved to Mayapur, where he lived by the banks of the Ganges, fully absorbed in chanting the holy names. He had the greatest reverence for the holy land of Navadvipa. Although he was so renounced and so absorbed in Krishna consciousness, as his reputation spread, gentlemen would come to him and give him donations. Once, Babaji Maharaja asked one of his servants to take the donations he had received, which he kept in an old burlap bag, and purchase a large pot of rasagullas. All the devotees were surprised, because Jagannatha dasa Babaji was so renounced and lived so simply. He would eat just the most simple rice and dal. Anyway, the servant brought the sweets, and Jagannatha dasa Babaji offered them to his Deities and then distributed them to the cows and dogs in the dhama. He said the creatures of the dhama were elevated souls and worthy of service.

Later, Babaji Maharaja would not accept prasada until he had shared his food with ten newborn puppies. He would wait until they came, and he would count them with his hands. (In his old age, Babaji Maharaja’s eyelids drooped over his eyes and prevented him from seeing.) So he would count them with his hands, and only after they had begun to eat would he also partake. He would say, “They are puppies of the dhama. They are not ordinary living entities.” He had so much faith in and affection for the dhama.

He had less affection for Mayavadi impersonalists. He used to say, “Let the dogs come in for darsana, but the impersonalists—kick them out!”

Srila Jagannatha dasa Babaji lived to a very old age. In fact, some Vaishnavas say he was just waiting for Srila Bhaktivinoda Thakura to come—someone to whom he could impart his special knowledge and realization, for the benefit of humanity. Srila Bhaktivinoda Thakura had requested to be transferred from his post in Orissa to Bengal so he could be near Navadvipa-dhama. And eventually, he was posted at Krishnanagar, near Navadvipa.

Srila Bhaktivinoda Thakura did extensive research to determine the actual birthplace of Sri Chaitanya Mahaprabhu. He studied various old maps, consulted the local people, and visited the different places. Eventually he found a mound where many tulasi trees were growing. He got the intuition that this was the actual birthplace of Lord Chaitanya, but still he wanted his intuition to be confirmed. At the time, Jagannatha dasa Babaji was the most renowned Vaishnava, and he was Srila Bhaktivinoda Thakura’s siksa-guru. Thus, Jagannatha dasa Babaji’s disciples carried him to the place with the mound and tulasi plants. He was so old (over a hundred and forty years old, some say) that his disciples had to carry him in a basket. And his eyelids were so heavy that he had to open them with his hands to be able to see. So, the disciples brought him, but they didn’t tell him that it was the site Bhaktivinoda Thakura had determined to be the birthplace. Still, when Babaji Maharaja arrived there, he spontaneously jumped out of his basket and began to dance in ecstasy, singing the holy names. Thus he confirmed the location of Mahaprabhu’s birthplace.

Srila Jagannatha dasa Babaji’s bhajana-kutira and samadhi are there in Navadvipa-dhama, in Koladvipa. Devotees who perform Navadvipa-parikrama visit there and get his mercy. We also pray to him for his mercy, that we may be instrumental in fulfilling the desires of Srila Bhaktivinoda Thakura, Srila Gaurakisora dasa Babaji Maharaja, Srila Bhaktisiddhanta Sarasvati Thakura, and the other acaryas in the line of Sri Chaitanya Mahaprabhu coming to us through Srila Prabhupada and his disciples.