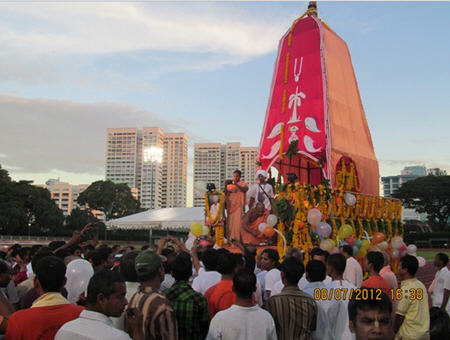 For photos please go to the link :

The most auspicious occasion of Sri Sri Jagannatha Ratha Yatra festival was held at Singapore on 8th July 2012. More than 4000 devotees took part and our special guests from Vrindavan was HG Vaishnava Prabhu and from Bangladesh was HG Caruchandra Prabhu who blessed the occasions to encourage the devotees.

The Ratha Yatra festival was organized by the Caitanya Cultural Society in Singapore and alike previous year a huge 15-feet high silver ratha weighing 4500kg of silver was brought from the Perumal Temple for Sri Sri Gaura Nitai. This event was held outside the Toa Payoh stadium. HG Caruchandra Prabhu and HG Vaishnava Prabhu performed Aratik and offering and then Sri Sri Gaur-Nitai Ratha cruised in the parking area for almost an hour followed by ecstatic kirtan and dance.

Devotees in Singapore worked night outs to make a huge new Ratha for Their Lordships Sri Sri Jagannatha, Baladeva and Subhadra Maiya. Sri Sri Jagannntah, Baladeva and Subhadra Maiya majestically sat on the Chariot while HG Charuchandra Prabhu boarded on the Ratha and performed Aratik and offerings to their lordships. Many VIP guest was honoured in a very Vedic traditional way and within a very short time the Ratha Yatra started.

Hundreds and thousands of devotees with tears of love in eyes and with ropes in their hands were just waiting to pull the Ratha. In the meantime Sri Sri Gaur-Nitai were escorted in the stadium by the devotees followed by enthusiastic Kirtan. Unexpectedly the chariot started moving and devotees tried their best to stop the Ratha as so many other ceremonies were to follow but Jagannatha, the Lord of the universe could not wait as He was eager to glance upon devotees in the stadium. Devotees pulled the chariot just like how the Gopis in Vrindavan did in Kurukshetra to bring their Lord back to Vrindavan.

After the Lord cruised in the stadium for about few hours the Rath came to a halt. Even though sumptuous Prasad distribution started still enthusiastic devotees lead by HG SiddhaGopal prabhu performed melodious kirtan, soothing the hearts of all and especially for the pleasure of their Lordships.

Many dignitaries attended the Ratha Yatra festival and performed puja and abhisekha. Among them was the retired SP Mr Raja Gopal, Chairman of Bengali universal Society Mr. Ratan Chandra Saha, Mr. Kiran Chandra Vala and Mr. Ranjit, a lawyer from Singapore, was the co-ordinator for this Ratha Yatra festival and is helping devotees to legally establish Krishna consciousness in Singapore.

While the procession was marching ahead, respected people from Singapore came forward to worship Sri Jagannath, Baladeva and Subhadra by offering a lamp, garlands, fruits and other bhoga items. (There was a counter opened for Bhoga offerings). As soon as the lights were turned on at 7:00pm the whole stadium looked like Vaikuntha (see photos).

The procession went round the stadium four times with ecstatic chanting and dancing and at 8:00pm the festival came to an end. At the end more than 3500 plates of delicious Prasadam were distributed. And at around 9 p. m. the silver rath cart was towed back to the Perumal temple for a distance of about 12 kilometres by a pick-up van which had the Hare Krishna maha-mantra kirtan resounding from its sound system. The silver rath was moving slowly and was very well lit and nicely decorated.

The sight of the rath and the sound of the holy names blaring from the sound system was an unusual experience for the local residents, who came out of the surrounding shops and buildings to see the cart. Some of them stood on their balconies to watch as it passed by. Many of them came forward and offered their respects and obeisance’s to Their Lordships.