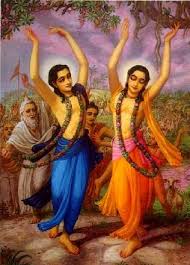 Feeling very sad (dukhi) over losing several children before his birth, his parents named him Dukhi Krishna Dasa. Upon taking diksha from Hrdaya Chaitanya he became known as Krishna Dasa. In Vrindavana, he joined Narottama Dasa Thakura and Shrinivasa Acharya to study the Goswami granthas under Shri Jiva Goswami.

“While living in Vrindavana, Krishna Dasa regularly swept the streets before dawn. He performed this humble service so that the Vaishnavas would not hurt their feet while walking to the Temples. One morning he found a captivatingly beautiful golden ankle bracelet. When Lalita and Vishakha-sakhis asked for the bracelet Krishna Dasa said he would only give it to the original owner.

“Blindfolding Krishna Dasa, the gopis brought him to Shrimati Radhika. She allowed him to put the bracelet on Her ankle. But before fastening it, Krishna Dasa reverentially touched it to his forehead. This left a new tilaka mark which now distinguishes all of Shyamananda’s followers.

“Rejoicing over Krishna Dasa’s transcendental fortune, Shri Jiva Goswami awarded him the name Shyamananda (one who pleases Shrimati Radharani or the servant of Shyamasundara Krishna. 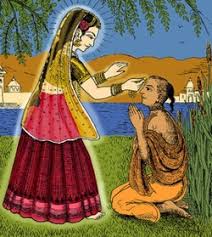