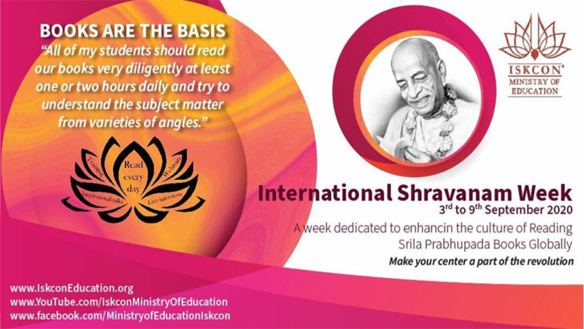 International Shravanam Week, run by the ISKCON Ministry of Education from September 3rd to 9th, has facilitated and encouraged devotees worldwide to regularly read ISKCON Founder-Acarya Srila Prabhupada’s books by providing resources, inspiration and guidelines. The Week is part of a larger effort, “Books Are the Basis,” to “enhance the culture of reading Srila Prabhupada’s books globally.”The promotional flyer for Shravanam Week

Shravanam Week was officially added to ISKCON’s calendar, after the society’s Governing Body Commission (GBC) accepted a proposal from the Ministry of Education during their Annual General Meeting in February.

A GBC resolution also supported the initiative, stating that “at the 2017 edition of the Sanga for Gurus, GBCs and Sannyasis (SGGS) it was felt there should be a worldwide effort to increase reading of Srila Prabhupada’s books.”

“At the SGGS the Gurus, sannyasis and GBCs felt that the one thing that could make maximum impact for ISKCON’s future generations and ISKCON’s sustainance would be if devotees read Srila Prabhupada’s books,” says Ministry of Education Executive Director Tapana Misra Das, who spearheaded the Books are the Basis and Shravanam Week initiatives.