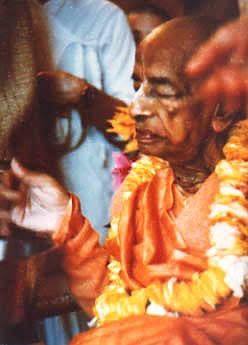 Although Srila Prabhupada’s health was not strong, he traveled to Allahabad in January of 1977 to preach at the Maha Kumbha Mela festival. Over ten million people were expected to attend the grand spiritual event. At the auspicious astrological time, the pilgrims would bathe in the triveni, the holy confluence of the Ganges, Yamuna and Sarsavati rivers. That Srila Prabhupada had chosen to attend this festival in the city where he had lived for many years was an especially significant historical and spiritual event. It was a great benediction to be there.

The early mornings were very cold. In fact, to walk on the sand in bare feet was like walking on ice or snow. The living conditions were austere for everyone, yet Srila Prabhupada stayed in a tent like the rest of the devotees. The electricity kept going off and the situation was less than desirable in many ways, but having Prabhupada’s association turned everything into a positive and wonderful experience for everyone. Nonetheless we were all concerned about Prabhupada’s health.

During the daytime the devotees went out on harinama and book distribution. It was very powerful because we were directly representing our beloved spiritual master who was nearby. Every conceivable tyagi and yogi was present at the mela, and there seemed to be more gurus than followers. But we were serving the supreme guru and acarya in disciplic succession, so we all felt blessed and protected.

Fortunately there were opportunities to enter Prabhupada’s tent and sit near him as he preached to visitors and instructed his disciples. The chance to be there and watch him closely as he interacted with others was priceless. His every word and gesture were divinely eloquent and pure. Millions of pilgrims had traveled from all over India to bathe in the holy rivers, but somehow or other we were sitting at the feet of Krishna’s beloved pure devotee. This was the pinnacle of all auspiciousness. After one such holy darsan, Srila Prabhupada’s personal servant surprised me with the remnants from Prabhupada’s prasadam plate. Although I’m undeserving in every respect, I came to appreciate the true meaning of the phrase “causeless mercy.”

One morning I was asked to collect enough holy water to fill a silver lota for Prabhupada’s bath from the triveni at the most auspicious time of day. It was very cold at that time of the morning and the waters were already filled with so many pilgrims, but it was an opportunity not to be missed and never to be repeated. The nectar was flowing from the heavens above.

Eventually Srila Prabhupada traveled on to Bhubanesvar and then to Mayapur for the annual festival. It was especially sweet that year. One night we all watched a play with Prabhupada in the audience. When Srila Prabhupada laughed, the entire crowd laughed. In fact, I think that we were watching Prabhupada more than we were watching the play onstage. What a joy to be with our spiritual master in such a relaxed and happy setting.

Later Srila Prabhupada went to Bombay. His health had markedly deteriorated by then, so it was a somber occasion. Gradually most devotees were encouraged to return to the West for preaching and other duties. Before leaving I had one last chance to render some service. I was asked to clean the floors in Prabhupada’s room. With bucket and rag in hand, I was so happy and thrilled to be able to offer a menial service while Srila Prabhupada gently rested close by. The next day as I was leaving, I bowed on the road outside the temple compound and prayed. I knew in my heart that it was probably the last time I would ever be in Prabhupada’s physical presence. As I gazed up to Srila Prabhupada’s room, I didn’t want to leave. That deep pain of separation will stay with me forever.