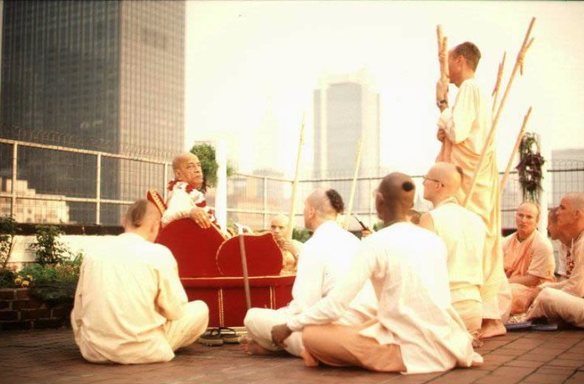 On July 9 1976 NY Prabhupada concluded his tour on the roof, which affords a virtually unimpeded view across the Hudson River. It was a relief to emerge from the confines of the narrow corridors and low ceilings of the interior and sit high in the air, aloof from the hustle of the streets, surrounded at a distance by Manhattan’s innumerable steel, glass and concrete monoliths piercing the fragile sky.
The sun was beginning to dip below the western horizon, its waning rays glowing red-golden, as Prabhupada sat relaxed on a lotus-flower shaped asana. His disciples formed a semicircular audience at his feet. It seemed to us most idyllic, but Prabhupada’s practical knowledge rose above our sentiment. He asked Chayavana Swami to stand and block the sun. “It is very disturbing,” he said, “but the early morning sun is very nice.” We all laughed at ourselves, giving deference to Srila Prabhupada’s superior knowledge. Tamal Krishna Maharaja commented that this single building contained all the different features of Krsna consciousness that Srila Prabhupada had previously planned and meditated on — a theater, a prasadam restaurant, a large temple and kirtana hall, nice facilities for life members, a guest house, diorama displays, and devotee quarters. Prabhupada had conceived of all this years ago, but could not realize it due to a lack of capital and manpower.
Srila Prabhupada smiled in agreement, and Tamal Krishna asked if he had yet more strategies for spreading Krsna consciousness that were still to be revealed. “Oh, yes,” Prabhupada said, smiling broadly, but he remained silent before his expectant audience.
Tamal asked him if he was going tell us what they were.
Prabhupada shook his head and chuckled, “No.” Then he quoted Canakya Pandita saying that one should not reveal his future plans because someone will come along and spoil them.
All we could do is laugh. Srila Prabhupada is like a cloud — sometimes there is rain, and sometimes there isn’t; but there is nothing you can do to force it. It is clear that Prabhupada has unlimited and far-reaching ideas and that the only stumbling block is our individual and collective inability to execute them. For the present he is emphasizing book distribution. In Los Angeles he told us that he is planting the seeds in his books for the Krsna conscious government of the future. He certainly foresees a time when the populations of entire countries will be devotees of Krsna, but for now his program is to lay the groundwork with massive book distribution, establishment of temples and the training of qualified men.