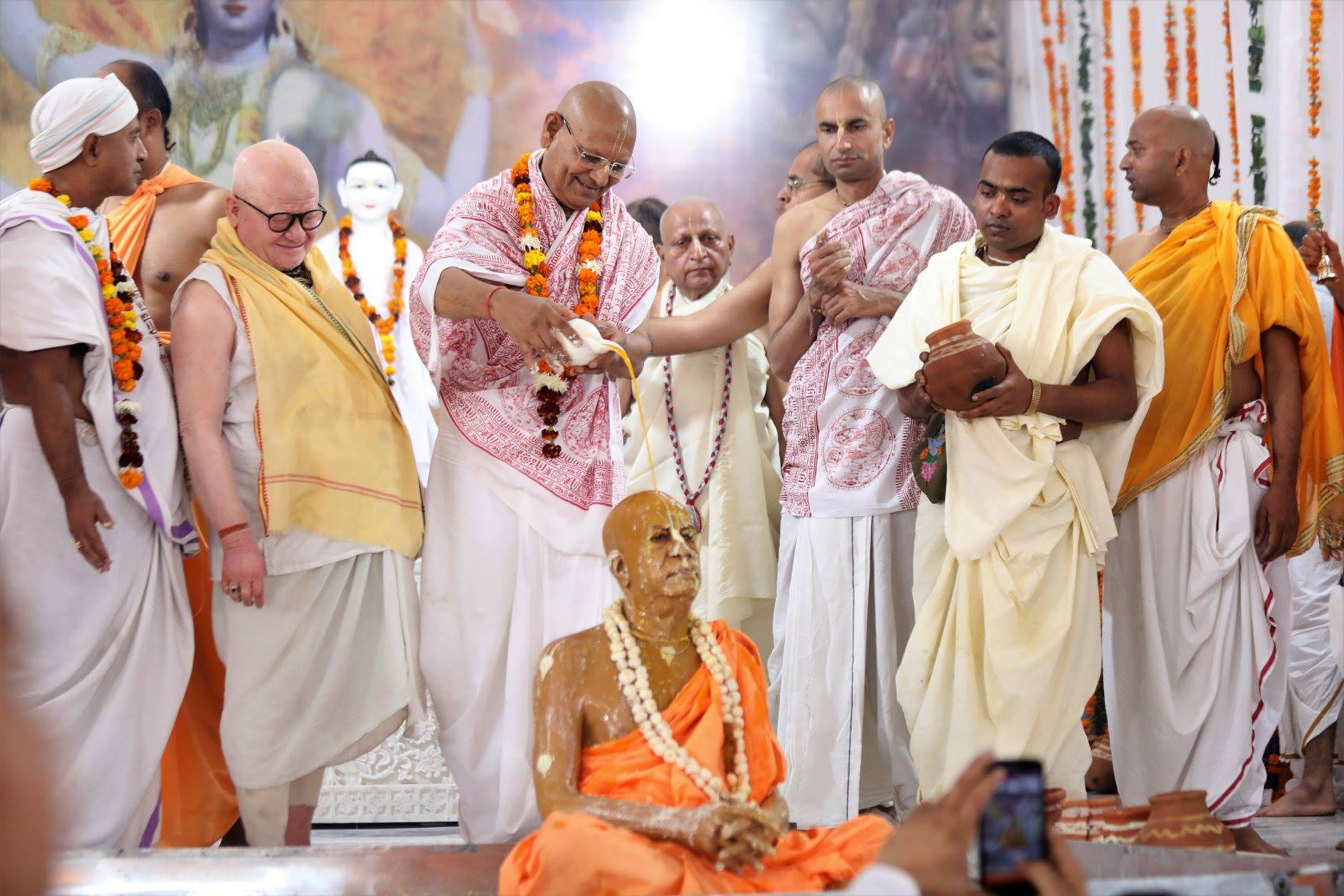 From West Virginia to New Vrindavan; Lord Krishna has spread His causeless mercy through Srila Prabhupada in every part of His creation. Now, it was time for Aligarh to become Harigarh.

Lord Sri Hari sent His representative, HH Kratu Das ji Das Ji Maharaj to carry out this most auspicious task and materialize or better so spiritualise the words of Lord Chaitanya and Srila Prabhupada who prophesied the existence of Krishna’s temple with the echoes of Harinaam in every town and village of the world.

Dayalu-Shyam also decided to make another elevated soul a part of these divine arrangements by making him the medium through which ISKCON got the land for the construction of its temple. This divine personality is, Dr. Varshney who had a deep desire just like Srila Prabhupada to make this temple a centre of Vedic education, especially Bhagwad-Gita, for all, hence giving the temple its name ‘Gita Gyan Mandir’.

After the Bhumi Pujan on 13th November, 2015 in the presence of HH Gopal Krishna Goswami Maharaj, HH Navyogendra Swami Maharaj and HH Kratu Das ji Das ji Maharaj Himself, the temple saw its opening in its first phase on 30th November, 2017. The preparations for this day had begun almost a year ago when HH Kratu Das ji Maharaj had fixed the date for this divine occasion to take place on the most auspicious day of Mokshda Ekadashi, Sri Gita Jayanti. As planned by HH Kratu Das ji Das ji Maharaj and His disciples, the day witnessed an attendance of almost 10, 000 devotees from Aligarh, Delhi and Vrindavan. A Gita yajna set up in 13 Yajna sthalis was performed with the recitation of all shlokas of Sri Bhagwad Gita by Gurukul students from ISKCON Vrindavan. The most awaited installation of the deity of His Divine Grace A.C. Bhaktivedanta Swami Srila Prabhupada followed by Sri Krishna and Arjuna in their one- of- a- kind rare darshan took place in the temple hall. There was a 12 hour kirtan performed by HH Kratu Das ji Das ji Maharaj’s disciples and many other visiting devotees in the temple hall.  A Bhagwad Gita katha by Maharaj’s disciples on the entire Bhagwad Gita was steady in the lawns followed by some beautiful cultural performances by Maharaj’s youth club, IYF C2C.

Continuous ekadashi prasadam was served the entire day to all the devotees visiting the temple.  __ commented “The programme was very well organized and managed”. Another devotee from Peru who was attending the programme also added that the arrangements were fulfilling and the prasadam was delicious. He also commented that he has never had such beautiful darshan of Krishna Arjuna.

It was a joyous day for HG Rasraj prabhu, the president of ISKCON Aligarh who had been working very hard for years to make this event a grand success.