by Amogha das.
How could they reappear?

One day whilst in Malaysia I received a phone call. The lady speaking had a strong accent so I couldn't understand her, but she mentioned my wife's name and said "heart attack." I was shocked and kept asking her "Did my wife have a heart attack!?" Finally after some confusion, I could understand that she was from a store named Heart Attack where she wife had reserved a pair of jewel studded bangles for Lord Nrsimhadev. A few days later we bought the wide gold bangles, covered with pink and multi-colour reddish diamantes. They opened with a spring so you pull them open and then close them around the Lord's wrists.

When we arrived in Mayapur, she checked the bangles. She was dismayed to discover that some of the jewels had fallen out. They were in the bottom of the bag. She placed the bangles with the jewels in a small paper bag on the altar table. In our apartment, the altar is over a metre high and is situated against the wall. On the other side of the wall is our bedroom. She wanted me to get strong glue and reset the jewels.

I needed to get epoxy glue, and it wasn't until we went overseas again and came back that I acquired it. When she asked me again to glue the jewels, I picked up the paper bag. I carefully looked inside, knowing there were loose jewels and bangles inside. I could only see very few jewels at the bottom and she immediately said, "Oh no! You have dropped Lord Nrsimhadev's jewels!"

"I didn't drop anything" I replied. "I just looked inside the bag."

"You've dropped the jewels," she continued. "They were in this bag. We went overseas. No one has been here. You must have dropped them.

To allow for storage space the bed was built with high legs. Underneath we keep about ten suitcases and travel bags. My wife started pulling the suitcases out from under the bed. In the middle of the floor under the bed, only accessible after removing suitcases, she found some of the missing jewels.

We were both astonished, because if you see the situation, there is no way you could, for example, drop a child's marble from the altar, and make it roll 1.5 metres, turn left, enter the doorway, roll left again 1.5 metres, then move right 1.5 metres after crossing over some suitcases blocking the way. We had no idea what to think of this. If you look at the jewels on the bangles, they are unique in colour and cut. It's not that you could find just any diamante and it would look like this.

So, I mixed up the epoxy glue, and set the jewels we found back in the bangles. But there were not enough to fill the empty spaces, which are like little craters in the surface.

Somewhat exasperated, my wife went to the temple to see Lord Nrsimhadeva and prayed "My dear Lord, do You want these bangles? I can't find the missing jewels. We can't offer them to You with crystals missing." Every time she swept the bedroom floor, she carefully looked for crystals. She swept that floor, mopped it and wiped it many times over a few months. During her sweeps, she found two more crystals, but there was still one missing.

Two days before Nrsimha Caturdasi, 4th May 2012, she decided to start another search. She pulled all the chairs and the table and cane lounge chair away from the wall near the altar. I was just letting the glue dry after resetting the other crystals when she called out, "I found a pink crystal! I found a pink crystal!" I immediately rushed over. She reached out to give it to me. "Oh NO!" she cried. "I DROPPED IT!!" Now we both got down on the floor with our daughter Sakhi, moved all the furniture, and with a light we looked and looked, but we couldn't find it.

What a tragedy that after all that effort we couldn't offer the bangles to Lord Nrsimhadev. Anyway, that crystal seemed too small. Then, and she said she does not know why, the idea came into her mind to look in the bedroom again. She entered the bedroom, turned left and walked to the windows and there on the floor, right in the middle of the space between the wall and the bed, was a single pink crystal. It was a perfect match with the other crystals on the bangles.

"I have swept this floor many times! she exclaimed. "How could this happen?" 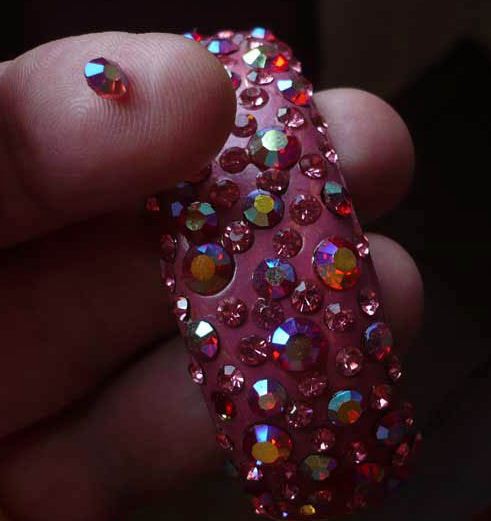 We just could not understand how this could happen. I mixed up the glue and as I waited for it to thicken, I snapped a photo of the last crystal on my finger. On Nrsimha Caturdasi she presented the bangles to the pujari who was attending the altar just after midday. She asked him to accept them, but he said, "No, you have to give them to Jananivas Prabhu first." She pleaded with him but he insisted that she give them to Jananivas Prabhu. Together we went up the stairs to his quarters and told Jananivas Prabhu all that had happened. 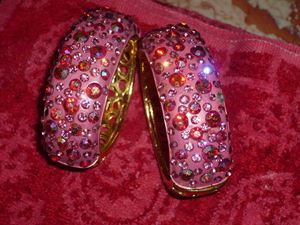 He smiled at our daughter (8 years old) and said, "Sakhi. Have you got anything to do with this?" She just giggled and said "No."

I asked whether we should offer them on Gaura Purnima. He replied that we could, but we could also offer them now. I was happy with "now." With a big smile on his face, he took the bangles down the stairs as we followed. He approached Lord Nrsimhadev, and to our great happiness, he removed the bangles the Lord was wearing, and placed our bangles on His powerful arms. Then he brought some Tulasi leaves and a mango from Lord Nrsimhadev and put them in Sakhi's hand. It was an unforgettable moment for us to see the gloriously beautiful, lavishly decorated Supreme Lord Nrsimhadev wearing our bangles with a huge smile. Thank you Lord Nrsimhadev for accepting our little offerings. Thank you for appearing in Mayapur and allowing us to serve You. Thank you Jananivas Prabhu for encouraging our service. Thank you Srila Prabhupada for revealing that the spiritual world is manifest here in the material world. By your mercy alone we can come here. Without you we would be lost in the darkness of the Kali age.