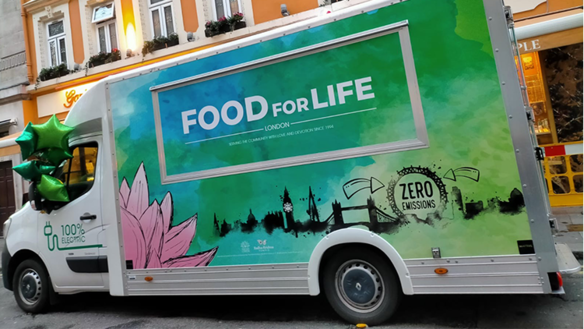 Food for Life London marked a milestone this Christmas by introducing the UK's first fully electric food distribution van to serve Londoners. The project has relentlessly continued to serve the needy during the pandemic and the nationwide lockdowns, remaining to be one of the few charities still providing free food to the homeless in Central London during these challenging times.

Thanks to the efforts of the London-wide community, the team will now be able to serve hundreds with the new zero emissions van. The van was unveiled at a virtual event on Sunday 20th December. The date also marked the 51st installation anniversary of Their Lordships Sri Sri Radha-Londonisvara and the opening of the Radha-Krishna Temple in London. The event was hosted by two budding YouTubers visiting a Hare Krishna Temple for the first time. Highlights of the event included the journey of the van, a Vedic ceremony by the Temple’s Head Priest and interviews with the Temple President, Govinda’s Restaurant Manager, Food for Life Chief Organiser and the Project Lead. Special guests including Deputy Mayor of London Rajesh Agrawal, Bhakti Rasamrita Swami, Indradyumna Swami and Sacinandana Swami shared their congratulations and heartfelt appreciation for the community work being done by the project through their messages of support.