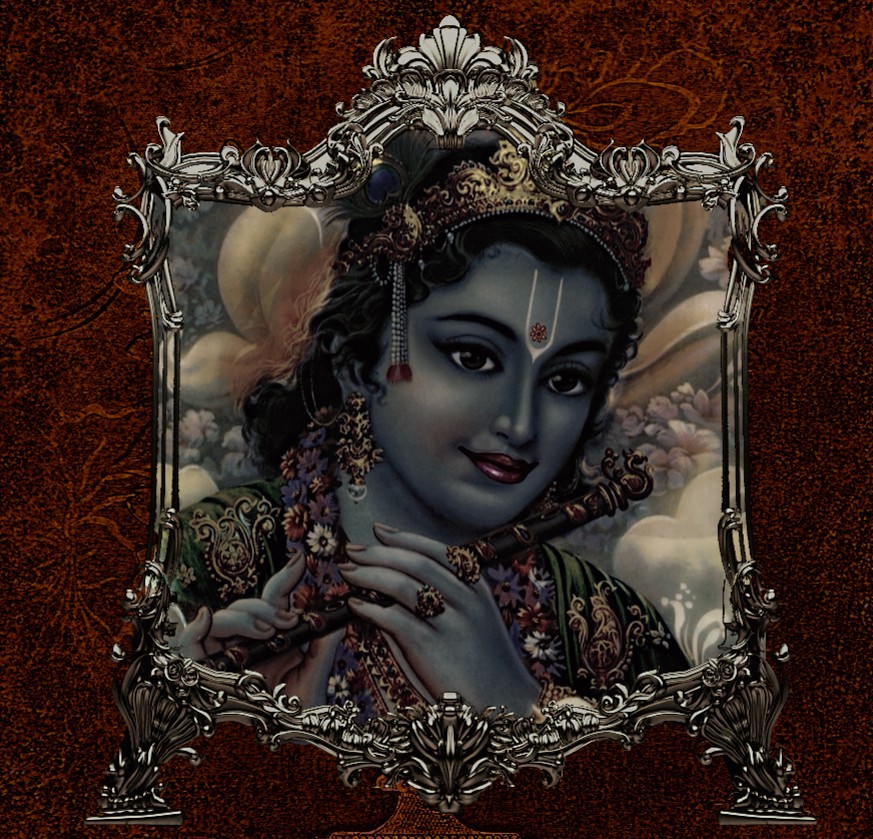 Why we should surrender to Lord Krishna’s lotus feet.

At the junction of two ages, amidst two immense armies arrayed on the battlefield at Kurukshetra, Arjuna scans his foes and becomes confused. When Krishna expounds eternal dharma to enlighten him, Arjuna addresses Krishna as pavitram paramam: “the purest of the pure.” (Bhagavad-gita 10.12) Arjuna adds, “All the great sages . . . confirm this about You, and now You Yourself are declaring it to me.”

Apart from the Bhagavad-gita, other books of wisdom are the Upanishads, essential Vedic texts that saints and sages have piously guarded against both extinction and mutilation. The eighth verse of Sri Ishopanishad, the topmost Upanishad, states that Krishna, the Supreme Personality of Godhead, is shuddham and apapa-viddham. Commenting on this verse, Srila Prabhupada explains:

To confirm that the Lord is always pure and uncontaminated, Sri Ishopanishad describes him as shuddham (antiseptic) and apapa-viddham (prophylactic). He is antiseptic in the sense that even an impure thing can become purified just by touching Him. The word “prophylactic” refers to the power of His association. . . . The Lord is also apapa-viddham because sin cannot touch Him. Even if He acts in a way that appears to be sinful, such actions are all good, for there is no question of His being affected by sin. Because in all circumstances He is shuddham, most purified, He is often compared to the sun.

Besides the Bhagavad-gita and the Upanishads, other prominent scriptures derive their inspiration and authority from the Vedas. One such scripture, named Bhakti-rasamrita-sindhu, was compiled by Srila Rupa Goswami, a principal disciple of Chaitanya Mahaprabhu, It details sixty-four transcendental qualities that are fully and eternally manifest in Lord Krishna. One of the most prominent listed therein is purity. In Srila Prabhupada’s summary study of Bhakti-rasamrita-sindhu, titled The Nectar of Devotion, he writes, “There are two kinds of supreme purity. When one type is possessed, one is able to deliver a sinful person. When the other type is possessed, one does not do anything which is impure. A person who possesses either of these qualities is called supremely pure. Krishna is both; He can deliver all sinful conditioned souls, and at the same time, He never does anything by which He can be contaminated.”

Not only is Krishna supremely pure and supremely purifying, but He is also a benefactor and well-wisher of all living entities, as stated in the Bhagavad-gita (5.29). Endowed with these super-excellent qualities, Krishna during His earthly sojourn some five thousand years ago absolved many contaminated beings of their sinful reactions just by touching them. Here are three examples:

The Hunchbacked Woman
While exploring Mathura, Krishna encountered Trivakra, a young hunchbacked maidservant of Kamsa, king of Mathura. She was carrying a tray of fine ointments. Krishna jokingly addressed her as “My dear lady” and “O you of beautiful thighs” and asked for some of her finest ointments. Enchanted by Krishna’s beauty and joking words, she gave Him a liberal dose of ointments. Pleased by her service, Krishna stepped on her toes with His lotus feet, took hold of her chin, and straightened her spine. Srimad-Bhagavatam (10.42.8) relates: “Simply by Lord Mukunda’s touch, Trivakra was suddenly transformed into an exquisitely beautiful woman with straight, evenly proportioned limbs, and large hips and breasts.”

The Snake
One day Nanda Maharaja, Krishna’s father, went to Ambika Forest along with other cowherd men and Krishna. After bathing in a river and worshiping Lord Shiva and his consort, Goddess Ambika, they decided to spend the night in the forest. As they slept, a great hungry serpent appeared and slithered up to Nanda Maharaja to swallow him. Distressed, Nanda cried for help. The cowherd men awoke and beat the serpent with wooden torches, but it would not relent. Krishna then came to the spot and touched the serpent with His lotus feet. “The snake had all his sinful reactions destroyed by the touch of the Supreme Lord’s divine foot, and thus he gave up his serpent body and appeared in the form of a worshipable Vidyadhara.” (Srimad-Bhagavatam 10.34.9)

Proud of his beauty, the Vidyadhara, a kind of demigod, had ridiculed a group of sages. Because of this sin, they made him assume the lowly form of a snake.

The Lizard
Samba and other sons of Krishna once went to the forest to play. When they were through with their game, they felt thirsty and searched for water. When they looked inside a dry well, they saw an amazing creature: a huge lizard resembling a hill. Concerned with its piteous plight, they tried to pull it out with cords and ropes but failed to rescue the entrapped creature.

They then went to Krishna and excitedly told Him what had happened. Lord Krishna accompanied them to the well, extended His left hand, and lifted the lizard out. “Touched by the hand of the glorious Supreme Lord, the being at once gave up its lizard form and assumed that of a resident of heaven. His complexion was beautifully colored like molten gold, and he was adorned with wonderful ornaments, clothes, and garlands.” (Srimad-Bhagavatam 10.64.6).

The divine being happened to be King Nriga, son of Ikshvaku. Nriga was famous for his charitable traits but had inadvertently incurred a sin by donating the same cow to two brahmanas.
Purity Levels in Living Entities

How can we contact Krishna to secure freedom from sinful reactions and redemption from impurity? The method is very simple: just surrender to Krishna’s lotus feet.

Krishna says in the Bhagavad-gita (15.15), sarvasya caham hridi sannivishtah: “I am seated in everyone’s heart.” When a living entity of impaired purity completely surrenders unto Krishna’s lotus feet, Krishna, situated in the heart as a witness (Supersoul), by His causeless mercy contacts the living entity, burns up all his sinful reactions, and restores his vitiated purity and his original splendor.

Recovery from vitiated purity to original purity is called purification. The living entity so purified does not err. He disengages himself from material sense gratification, focuses his senses on Krishna, and works only for Krishna’s satisfaction. The work done for the satisfaction of Krishna is not susceptible to any reaction and does not cause any bondage. Thus a purified living entity becomes liberated even while living in the material world. When he sheds his body at the time of death and attains Krishna’s abode in the spiritual world, he gets a spiritual body. With spiritual eyes he can see Krishna face to face and becomes one of His associates, eligible to share His opulences. He is then designated “eternally liberated” and never returns to the material world.

Surrender to Krishna’s lotus feet is the panacea for all the ills of the material world. Lord Krishna elaborately describes various kinds of knowledge and processes of religion during His immortal discourse, the Bhagavad-gita. He then summarizes the entire Gita in one verse (18.66): “Abandon all varieties of religion and just surrender unto Me. I shall deliver you from all sinful reactions. Do not fear.” Similarly, during His immortal discourse with Uddhava (Uddhava-gita) in the Srimad-Bhagavatam, the Lord assures us in verse 11.29.34, “A person who gives up all his fruitive activities and offers himself entirely unto Me, eagerly desiring to render service unto Me, achieves liberation from birth and death and is promoted to the status of sharing my own opulences.”

Srila Prabhupada concludes in his purport to Bhagavad-gita 15.6, “That supreme abode [of Krishna] can be achieved by surrender and by no other means.” We should unhesitatingly accept Krishna, the supreme purifier (shuddham), as the supreme savior of all living entities. We should unreservedly surrender unto His lotus feet and attain the ultimate and supreme goal of human life—to go back home, back to Godhead.