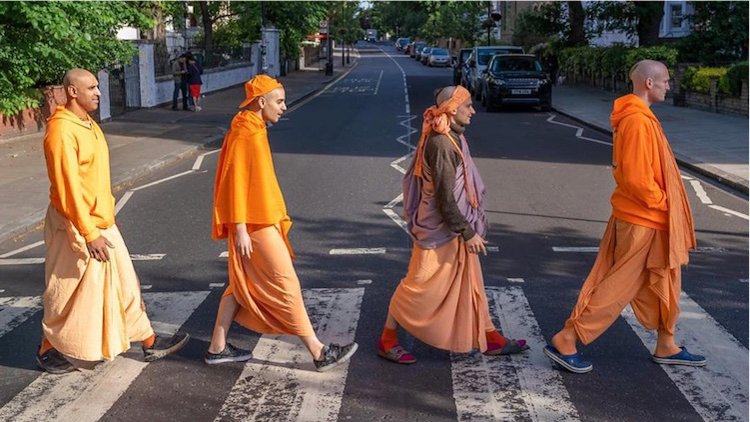 On September 15th, brahmacharis from the Radha Krishna Temple in London celebrated the 50th anniversary of ISKCON UK by recreating The Beatles’ iconic Abbey Road album cover and sharing the photos throughout social media.

“After we celebrated ISKCON’s global 50th anniversary in 2016, I was keen to capture the mood of something quintessentially British for our own UK Golden Anniversary in 2019,” says UK communications director Mina Sharma. “And what is more British than The Beatles!”

Of course, ISKCON’s history in the UK is famously interwoven with that of The Beatles. In September 1968, three devotee couples – Mukunda and Janaki, Shyamasundara and Malati, and Gurudas and Yamuna – along with Malati’s baby daughter Sarasvati, left San Francisco with a dream to follow Srila Prabhupada’s instructions and set up the first Hare Krishna Temple in the UK. Their other ambitious goal? To meet the biggest band on the planet, The Beatles.

Nine months later, the Radha Krishna Temple devotees had recorded an album at Abbey Road studios with George Harrison and were performing their hit single Hare Krishna Mantra on BBC’s Top of The Pops. On September 15th1969, days before The Beatles released their Abbey Road album, ISKCON UK was incorporated.

To commemorate the occasion, four brahmacharis from the Radha Krishna Temple were photographed walking across the zebra crossing outside Abbey Road Studios, recreating one of the most famous images in popular music.

As they did so, they performed live Harinama Sankirtana, putting them in a blissful mood that resulted in a whole series of photos beyond the original recreation. 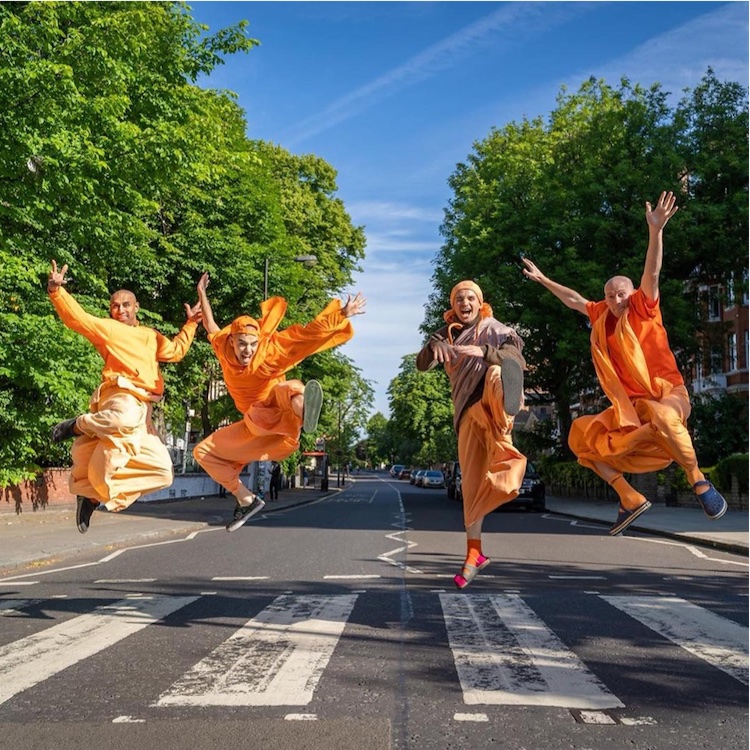 “Initially, the idea was to make it quite an arty shot – just to have the four brahmacharis dressed in orange against the background,” says Mina Sharma. “But it kind of evolved into a more playful photo shoot, because the brahmacharis were having so much fun!”

The photos have since been shared on social media multiple times and are going viral, reaching over 33,000 people so far. “It’s a lighthearted, celebratory piece that has been really embraced by the devotee community,” Mina says.

It’s not the first such effort -- devotees all over the UK have been celebrating their 50thanniversary for some time now in a variety of ways.

On Saturday September 7th, the 50th anniversary of Srila Prabhupada stepping onto British soil, ISKCON Leicester organized a huge photo projection of Srila Prabhupada onto a hotel in Leicester city center. They alsohosted a street festival in the city, which included a stage show and cupcake distribution. 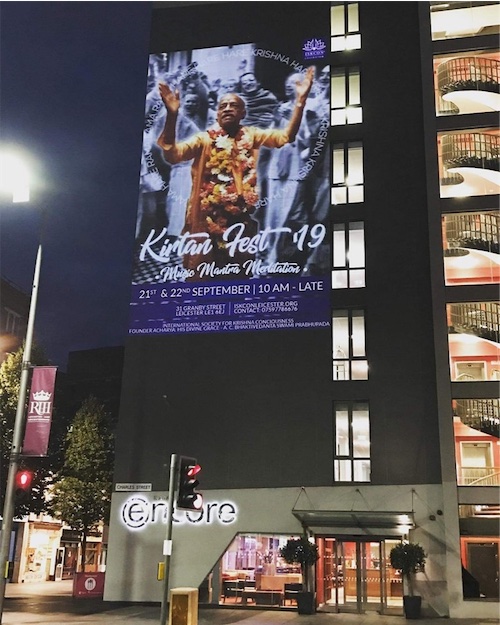 On Sunday the 8th, ISKCON Newcastle devotees were out in force for an ecstatic harinam at the Great North Run, which takes place between Newcastle Upon Tyne and South Shields. They shared the Holy Name with 57,000 runners at the event, the largest half marathon in the world.

On September 14th,ISKCON Brighton hosted a seafront Rathyatra. And on the 15th, the actual 50thanniversary day, there were a number of other activities along with the Abbey Road photos.

Bhaktivedanta Manor hosted a special morning program, attended by many Srila Prabhupada disciples. It featured a commemorative class by GBC Praghosa Das, in which he charted the evolution of ISKCON UK from those first three couples to today, when there is a temple in every major city in the UK.

In addition, second generation devotee Ragini Radhika Dasi appeared on BBC One’s Sunday Morning Live TV show to talk about faith and fashion. Originally from Australia, Ragini is starting her own fashion label, Pilgrim, which is inspired by both yoga and active wear, and the devotee fashion she grew up with. 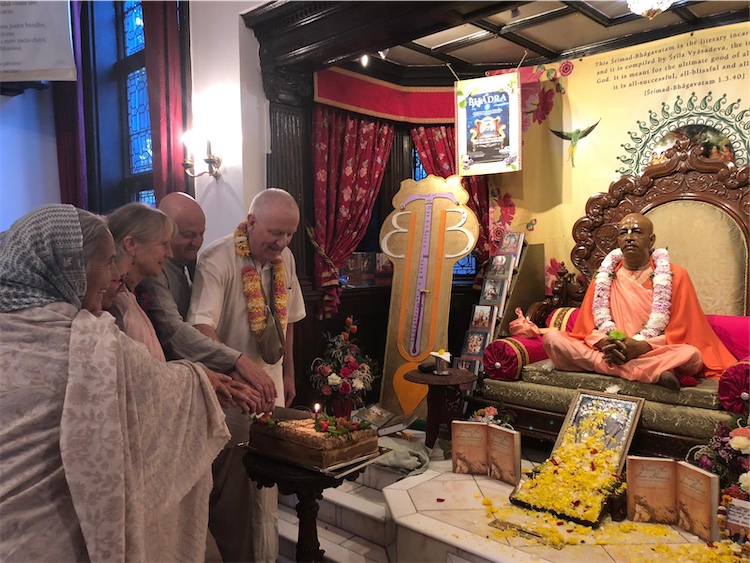 The celebrations are still far from over. October 19thwill see the launch of DEVI – an initiative to empower and and encourage women to be part of management teams in ISKCON centers across the UK. It will also protect women by providing legal advice and help for those in dangerous situations such as abusive relationships.

At a yet-to-be-confirmed date, academic Dr. Dori Howard from Liverpool Hope University, a lecturer in The Beatles and Popular Music, will interview Shyamasundara Das about his encounter with The Beatles, and talk about how public perception of the Hare Krishnas has changed over the years. The event will take place at Bhaktivedanta Manor.

Lastly, there’s the grand finale – the Krishna Spectacular at the Hammersmith Apollo on November 24th.The Gala event is expected to be attended by about 3,000 people, and will include a discussion with three of the original six UK pioneers – Shyamasundara, Malati, and Gurudas.

“There will also be performances by the Natya Nectar Dance Company with their Cirque du Soleil-style show, Jahnavi Harrison, Jayadev Prabhu and his Mantra Choir Experience, and Samadhi Dance Company with Ananda Monet,” Mina says.

Book your tickets to the Krishna Spectacular at the Apollo here: www.eventim.co.uk/krishnaspectacular