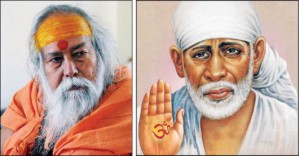 New Delhi: In the light of the controversy between the Shankaracharya of Dwarkapeeth and the followers of Shirdi Sai Baba, the International Society for Krishna Consciousness (ISKCON) calls for respect and co-operation in keeping with the Hindu tradition of tolerance.

ISKCON follows the Gaudiya Vaishnava tradition and accepts the Bhagavad-gita and the Bhagavata Purana as our main sources of authority. According to these sources, God incarnates again and again to further His mission of elevating human consciousness to the divine level. That same mission has been carried forward by many saints and sadhus throughout the history of humanity, not only in India but all over the world.

Recognizing the universality of the Lord’s mission we respect the spiritual teachers, gurus and saints of all the world's great religious traditions - seers who throughout history have dedicated their lives to raise human consciousness. It is natural that people serve, revere, and sometimes worship such personalities. By doing so, according to the Vedas, spiritual merit is attained.

We respect the right of all people to worship and practice their faith as guided by their conscience and inspired by the various teachers and specific scriptures they choose to follow.

Within our Gaudiya Vaishnava tradition, we refer strictly to the Bhagavad-gita and the Bhagavata Purana and other Vedic texts, and worship God as He is revealed and predicted to appear in those texts.  Thus, we accept that Sri Chaitanya Mahaprabhu (16th Century) is the most recent incarnation of the Godhead, based on predictions of the sastra and other evidence.

Yet, we don't expect all Hindus or all god-conscious people to believe in Him as we do. Similarly, no member of any sampradaya should be expected to fully adhere to the tenets of another's system of belief. There are vast differences of opinion within the Hindu communities. Philosophically we may not agree with their choices, but we respect their right to worship and interpret scripture as they choose.

At the same time, we also recognize the right of any member of a sampradaya to disagree and to debate robustly, but respectfully, in favor of the philosophical points to which they subscribe, and into which they place their faith. It is the great strength of our dharma to allow such debates and to live peacefully amidst our differences.

Thus, as members of the Vedic tradition and devotees of Lord Krishna, we urge our brothers and sisters to respect each other despite our differences. As sincere advocates of sanatana dharma, let us resolve our issues in the mood of humble seekers and servants of God, and not allow our differences to overwhelm the natural respect due to one another.