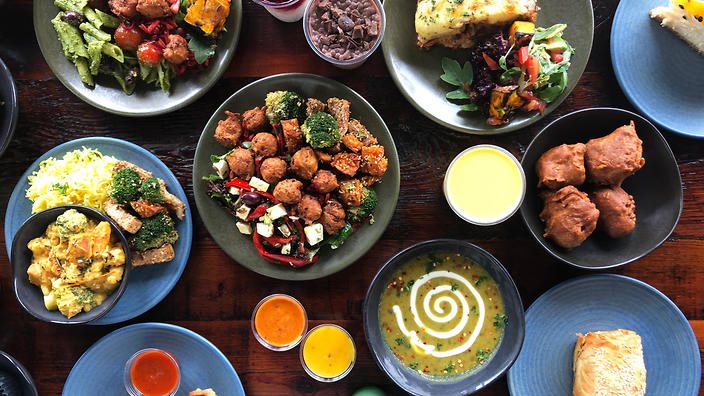 By Amy Fallon for sbs.com.au

For many devotees, the journey involving Krishna consciousness often begins with food.

“If you come here and you’re hungry, we’ll feed you – no problem,” says Ajita Cozzi, 57, the director of New Govardhana, a lush 400-hectare site that is Australia’s
largest Hare Krishna farm. It’s located in the village of Eungella in northern NSW.

Followers of The International Society for Krishna Consciousness (ISKCON), founded in 1966, sometimes referred to their
movement as the “kitchen religion”. It makes sense when you see how Hare Krishnas, who adhere to a lacto-vegetarian diet, dish up food at restaurants and temples around the world. Their traditional “love feasts”, which started in the ’60s, can involve huge scoops of dahl and rice, kofta balls and
chunks of halva, a semolina pudding. So when New Govardhana faced financial difficulty in 2001, it turned to one of the things that the faith does best: food.

Cozzi, who was born in France and joined the movement in the ’80s in Brazil before moving to Australia, began catering at music festivals across Australia to raise funds.

“We were doing that all over the world for free anyway, so I thought we might as well sell [the food],” he says.

For their first gig, the Bluesfest in Red Devil Park in Byron Bay in 2003, he borrowed some pots and a pan.

“There was only five or six of us and we cut something like 1.2 tonnes of potato by hand. We had no machines,” Cozzi says, with a laugh.

The $6 plates of food, including sweets, were a hit. The farm was able to pay off a few bills.

Within four years they’d cleared their debt of nearly half a million dollars, but people had become hooked on Krishna food –
and wanted more.

In 2009, Cozzi decided to open a restaurant in Burleigh Heads on the Gold Coast. He’d seen the success of similar establishments in Sydney and Melbourne and at the time there weren’t many vegan and vegetarian restaurants in the tourist spot – but
there was demand. The restaurant, Govindas, was launched with no advertising, just a cardboard sign saying “open”. Yet there was still a line outside the door.

“Subway [across the road] told us that half of their business went the next day,” says Nitai Durr, 32, a second-generation Hare Krishna who manages the non-profit restaurant and its Coolangatta outpost which opened last May.

“It’s an indication that there’s a calling for something affordable, healthy and a little bit different than a sandwich or a wrap,” he adds.

“There was only five or six of us and we cut something like 1.2 tonnes of potato by hand.”

Today the restaurants serve “prasadam”, sanctified food, some of it made from organic vegetables grown at New Govardhana.

The Burleigh Heads branch won a Crave Gold Coast award for the best vegetarian eatery in the region and is often busy, even on an average Thursday.

Durr points out about 80 per cent of customers are not vegan or vegetarian and spans “everyone from your big muscle-builder guys down to your old ladies”. The profits from the two restaurants now go back into New Govardhana and its projects, which include a primary and secondary school with 130 children and a sanctuary with 90 cows.

But the festival catering continues. And, across Australia, there are at least 20 Hare Krishna restaurants, with a handful located within a small radius on the Gold Coast. Elsewhere, some like Lucid Pure Vegetarian, in a Murwillumbah shopping mall, is relatively new: around two years old. Cozzi
says Australia is, in fact, the prasadam capital of the West.

In the future, a drive-through Govindas may be on the cards, he says. And despite the clear popularity of Govindas, Durr downplays what they do. “The thing is we don’t claim to be these amazing cooks,” he says. “It’s more about the conscious effort.”