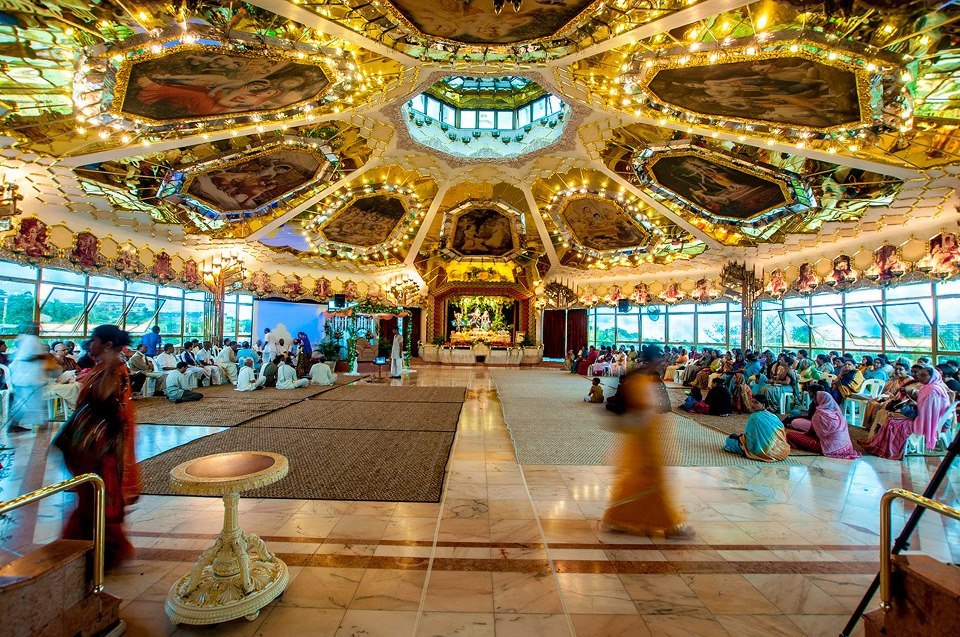 Before formally meeting Hare Krishna devotees, I was one of those who ran in the opposite direction when I saw them coming. I used to think they were from another planet. Who are these guys with their chants and dancing in the street? Or are they going to hit me up for a donation?

But one day I had no choice, I was forced into a corner. The front door was open and a devotee knocked on the door. I had to let him in. I thought, since no one was home I will make this quick, a quick donation and get rid of him. But he was different. I offered him some fruit juice and two hours later all my conspiracies and curiosities were defeated. He answered all my questions and left me with a book. That book opened the door to my spiritual journey – everything became so much clearer. I was in high school at the time. Some time after, the devotees invited me to accompany them to the annual Durban Festival of Chariots. I had seen newspaper clippings and had even caught a glimpse of the festival on television, but now I had the chance to experience the festival first-hand.

As we made our way from Pretoria to Durban, my excitement grew and grew to something I cannot express. Finally, from the highway I got a glimpse of the chakra, at the top of the highest temple tower. How do I describe this monument? A masterpiece? An extraordinary spaceship? After crossing the bridge into the temple, I felt as if I was not in Chatsworth or Durban or South Africa. Instead I’d been transferred to another universe.

Besides the beauty of the “lotus” architecture and landscaping, or the cascading water features in the moat, or the stainless steel rails’ brilliant reflection on the marble walls, or the shimmering gold lamps that create the perfect effulgence around each of the paintings in the temple, or the iridescent light of the chandeliers, or the beauty of Sri Krishna’s simple smile on the altar; everything about this wonder is perfect. Srila Prabhupada sometimes described his temples as embassies of the spiritual world. Just as an embassy is non different from the country it represents, this temple is non different from the spiritual world

Amidst all this opulence, I was most attracted to, and amazed by the devotees. Devotees from so many different countries, so many different cultures, speaking so many different languages all under one roof, glorifying the Supreme Personality of Godhead, Krishna. It was an experience I will never forget. Who would have thought a few years later, I would be serving at this temple. I was advised to relocate to Durban after living for six months in Mayapur, India and prior to that, three years at the Pretoria temple. I was happy and nervous coming to this huge temple.

Every ISKCON temple across the world has its unique flavour. I sometimes think of it as an ice cream shop, with hundreds of assorted flavours, but today I can testify that this temple has all flavours combined and is the crème de la crème. It has become my home.