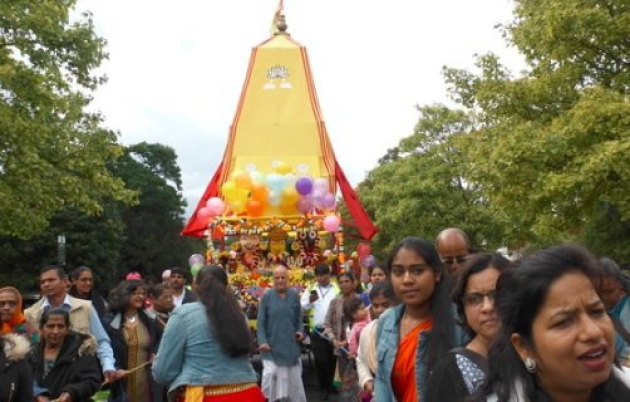 The International Society for Krishna Consciousness (Iskcon) will be holding its annual “Festival of Chariots” on Sunday, September 30.

The procession will disembark from Redbridge Town Hall, in High Road, at 12pm and end in Melbourne Field, in Valentines Park, Cranbrook Road.

Raj Nagulapally, one of the event organisers, said: “It goes back to thousands of years ago, to India and the temple of Puri.

“High up on the chariot are the dieties of Lord Jagannath, his older brother Baladez and sister Subhadra.”

He said that the festival draws in nearly a quarter of a million in India each year and was brought to the west by Abhay Bhaktivedanta Swami, the founder of Iskcon who passed away in 1977.

“We usually have around two hundred people come,” he said, speaking of the Ilford event.

“But this year we are expecting two thousand. We have done more promotion.”

He said: “We give out spiritual books to make the people aware and understand self realisation.”

He added that many will mark the day with two hours of mantra meditation.

On arriving in Valentines Park, attendees can watch drama, dance and eat food until the event finishes at 5pm.