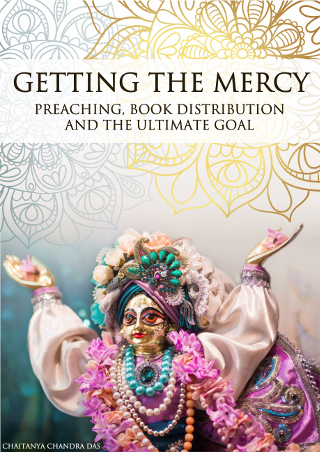 My name is Caitanya Chandra dasa, disciple of HH Bhakti Dhira Damodhara Swami (BTS). I joined ISKCON in 1992 and my main service is book distribution. I travel in the south of Brazil during most of the year, doing book distribution and trying to spread Krsna Consciousness in small cities.

Few years ago, my Guru Maharaja gave me the mission of distributing books and teaching others about book distribution. This effort resulted in a book that is now available to all interested devotees.

This book took a long time to ripen. I started working on it in 2014, but it was finally completed only recently. This long period allowed me to relate in detail many realizations from book distribution while they were still fresh in the memory. Many passages were written directly on the frontline, in the van, or on park benches during breaks on book distribution.

Every book distributor has his sankirtana stories and his particular realizations and reasons why to start and continue book distribution despite all difficulties. One reason is that it helps others, but another is that we are actually the main beneficiaries. By assisting Srila Prabhupada in his lila of spreading Krsna consciousness, we get more mercy than we can realize. A first-class disciple is one who assists his spiritual master in his mission. All our spiritual masters are sacrificing their lives to spread Krsna consciousness, and if a sincere disciple takes up the mission of assisting them, they become most pleased. Actually, it’s impossible to repay the debt to the spiritual master: knowledge about Krsna and love for Him is such a great gift that it is impossible to repay the benefactor. Still, we can at least show some appreciation by trying to relay the message to others.

This book is my small attempt in this direction. The main factor in deciding about publishing this book as a free e-book instead of hard copy is to allow all interested devotees to have easy access to it and to share with their friends. There is no marketing department or advertising budget: this book is being propagated by word of mouth alone. If you get some inspiration, some valuable information, or some realization in this book, feel free to share it with others.

In his book Getting the Mercy, Preaching, Book Distribution and the Ultimate Goal, Caitanya Chandra prabhu, shares his 25 years of experience on sankirtana. A dear friend, current number one in book distribution and role model for sankirtan devotees and preachers alike, he divulges secrets, realizations and his vision for personal, collective and global transformation.

As a free ebook he made it easily available. Read it, live it, share it!

In gratitude, your servant and friend,
Navina Nirada dasa

- Overview of the book:

This book is divided into eight chapters, grouped into three parts. The four central chapters deal with topics directly connected with book distribution, while the first two and the last two are supportive chapters, that supplement them with other relevant topics for a book distributor.

The first chapter is an introduction. It examines the historical basis for book distribution, how it fits in the teachings of Lord Caitanya and of the previous acaryas, and how it is connected with the prediction that the holy names would be chanted in all towns and villages. It also examines how book distribution fits in the current modern environment (with e-books and other new mediums), and presents different ideas connected with the proper mood and mentality for one interested in serving as a book distributor. Pitfalls on the way are also examined.

The second chapter deals with a rather important topic: how to work together with other devotees to spread Krsna consciousness. As Srila Prabhupada explains, “the distribution of the Hare Krsna maha-mantra should be performed by combined forces”. This is a simple concept to understand in theory, after all, we all heard the expression “united we stand, divided we fall”. However, when it comes to practice, we can quickly realize that to work together with others is one of the most difficult things. Actually, to be able to work cooperatively with other devotees from different backgrounds and cultures, in a peaceful mood, is one of the ultimate tests of spiritual realization. Without being able to work with others, it’s impossible to maintain an organized preaching effort.

These first two chapters lay the foundation for the third chapter, that deals with the external aspects of book distribution: how to stop and talk with people, how to present the books in interesting ways, how to cultivate interested persons and so on. It also deals with the importance of maintaining a good sadhana and studying the philosophy, and how to deal with the mind. This is by far the largest chapter in the book.

The fifth chapter is about maturity in book distribution. It’s a philosophical chapter that examines sastric guidance for preachers. Frequently, we think that we should approach people unrestrictedly and insist until they take a book or become exasperated, but actually, the sastra gives guidance on different ways to deal with different classes of people. These recommendations can be used to improve our book distribution, and especially to make the distribution easier for the book distributor, avoiding the burn-out effect that makes so many devotees abandon book distribution after some months or years of struggle. This chapter also speaks about the training of new book distributors.

The sixth chapter closes the main body of the book, examining another important aspect of book distribution: traveling sankirtana. It’s very difficult for any book distributor to continue distributing day after day in the same city, speaking with the same persons. Sooner or later, almost all book distributors come to the point that they want to travel and reach different publics. Srila Prabhupada himself was emphasizing the importance of traveling sankirtana groups and giving special blessings to devotees dedicating themselves to this service. It’s not something easy to do, especially when one is traveling for long periods or living in a van, but we don’t need to make it more difficult than it needs to be. Many times, traveling preachers may develop an elitist mentality. This is balanced by discussing the importance of temples. This chapter also gives advice on how to maintain our health, discussing about exercise, eating habits and so on.

The final two chapters offer additional points. They are not directly about book distribution but offer foundational topics, that reinforce our bases, giving us a platform from which we can project our devotional efforts.

One serious problem that we currently face in our society is the dilution of our philosophical basis. More and more devotees are mixing their Krsna consciousness with different mundane ideas and concepts, distancing themselves from the teachings of our acaryas. Others go in the opposite direction, becoming fanatic and adopting limited and inflexible views, which are also detrimental.

The seventh chapter has the goal of offering a balanced view, examining different ways in which one can go off astray. The history of Vaishnavism is full of examples of different groups that deviated in different ways, and thus ended becoming separated from the tree of Mahaprabhu. By learning from their mistakes, we can avoid committing the same blunders.

Most of us are going to spend the majority of our lives living with a partner, in a (hopefully!) loving relationship. While many passages of our scriptures warn us about the dangers of grhamedhi life, others emphasize the advantages of a healthy and progressive family life. The eighth chapter offers guidance on how to avoid the traps of sensual indulgence, and how to build a safe environment for the development of our Krsna consciousness, molding our family life as an asrama, a platform from which we can advance to higher realms of devotional service. The primary goal is to offer advice to serious devotees that desire to build a family that can support their service, but this chapter can also be useful for brahmacharis since it emphasizes the duties and regulations of family life in Krsna consciousness (it’s not easy!). By understanding the duties and responsibilities, one can make a mature and conscious decision to avoid it, if that's the case.