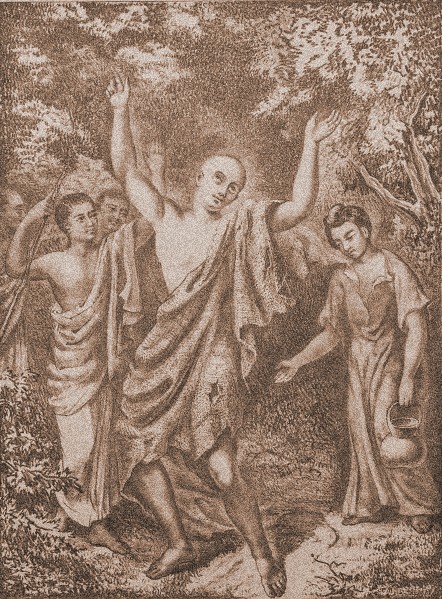 It was very late December in 1958, the disappearance day anniversary of Çréla Bhaktisiddhänta Sarasvaté Öhäkura. His elderly disciple, initiated in 1933 as Abhay Caraëäravinda Däsa, was sitting alone in Våndävana. Outside his window, the sacred Yamunä River flowed by peacefully – but his heart was in turmoil. He felt so helpless and hopeless. What service did he have to offer as a meaningful gift of gratitude to his Gurudeva on this most painful yet precious day? Any attempt to even remember his glorious master was soon eclipsed by remembrance of the horrendous happenings since his departure from this world.

How powerful had been Çréla Bhaktisiddhänta Sarasvaté Öhäkura’s preaching mission! His presses ran day and night, printing transcendental magazines, books and the daily Nadiyä Prakäça. But the four magnificent presses his Gurudeva had established to distribute Çré Caitanya Mahäprabhu’s teachings to the suffering masses had been sold by his deviant disciples to pay court case expenses. And even his own meagre attempts to publish Back to Godhead (BTG) every fortnight had come to a grinding halt in November, 1956. He had no money, and support for publishing BTG was sporadic.

Overwhelmed by emotion he broke down and sobbed quietly but uncontrollably. He bitterly lamented his master’s absence and the collapse of the Gauòéya Maöha’s unparalleled compassionate preaching prowess.

In the dim light of dawn he took up his pen and poured out his heart to his beloved Gurudeva, overwhelmed by feelings of separation from him.

What he penned, now known as Çré Viraha Añöaka, is a transcendental masterpiece which can give us some entrance into Çréla Prabhupäda’s heart – and the very heart of his saìkértana mission. Quiet and careful contemplation of it will not only connect us more tangibly and deeply to Çréla Prabhupäda and his mission. It will also make us much more aware of the preciousness of every sincere attempt we make to serve that mission…..