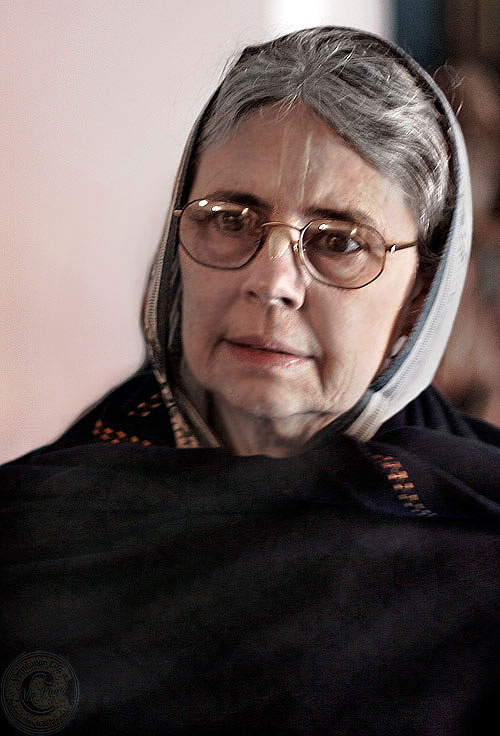 One evening, Ramesvara prabhu called us all into the temple room for an emergency istagosthi and told us that Srila Prabhupada was in Hawaii but he was very, very ill and he was coming to Los Angeles that night; but no one should go to the airport and greet him, we should be very quiet around the temple and no one should try to ask for darsanas or anything like that. Prabhupada was ill and he was coming to rest, we wouldn’t see him at all. At the end he asked for questions. My only service to Srila Prabhupada, a direct service, was to make these cookies that he gave out to the children, so I raised my hand and asked, “Should I make the cookies?” And he immediately said, “Cookies! I’ve just been telling everybody that Srila Prabhupada is so ill. You think Prabhupada is going to give cookies to the children?”

I felt so bad. I went home and I was crying like anything telling my husband, “But it’s my only service to Srila Prabhupada.” And I guess to pacify me, he said, “Never mind, service is absolute, so you go ahead and make the cookies and bring them over just as you usually do, bring them to guru puja, and later you could offer them to a picture of Srila Prabhupada and distribute them in the playground to the children.” That pacified me and the next morning I got up early and very carefully made the cookies. I set them out on a beautiful silver plate and brought them over and tucked them behind the vyasasana. Nobody expected Srila Prabhupada to show up for guru puja. We knew he had arrived in the night, but we knew he was very ill.

Just before the curtains were to open, suddenly the door to Srila Prabhupada’s quarters opened and there was Srila Prabhupada looking so ill. He was being held by two people. The curtains opened and they laid him down to pay full dandavats in front of Sri Sri Gaura Nitai, then they had to pick him up again. He was so weak and they helped him again in front of Rukmini Dwarakadish and laid him down again. Up and again in front of Lord Jagannatha. By that time they were back at the door to go back to his quarters and Srila Prabhupada said, “No, there should be guru puja.”
So they helped him up his vyasasana and we had a very short guru puja.

Then they climbed up to help him down and Srila Prabhupada said, “No, there should be class.”

So then Srila Prabhupada gave class and I remember that even though he was speaking into the microphone you could hardly hear him because he was so weak and he was sitting with his head all fallen forward, he was so weak. After a short class, they went to help him down again and Srila Prabhupada said very audibly into the microphone, “No. Where are the cookies? The children are waiting for their cookies.” I ran and brought the cookies. I was so happy. Srila Prabhupada remembered the children. He was so ill but he had that heart for the children. And ill as he was, he waited till he had personally given every last child a cookie. Then he broke up the rest. By that time there was a huge kirtana and he threw the rest of the cookies out into the crowd of all the dancing brahmacaris and everybody just went wild.

Dear Friends,
The book "Taking Care of Krishna's Devotees" by H.H. Niranjana Swami is available for those of you who wish to uphold Srila Prabhupada's mood of caring for others. 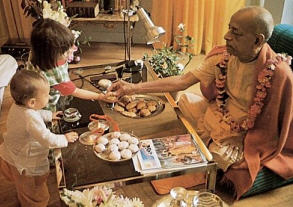