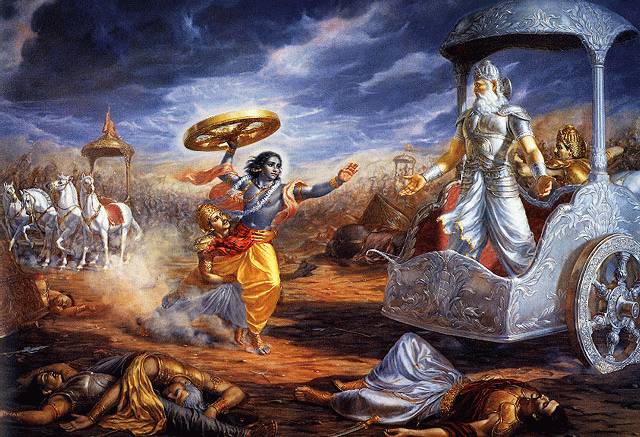 Birth and Boyhood:
Bhishma's name in his boyhood was Devavrata. He was the eighth son of Shantanu, a king of the lunar dynasty and Gangadevi. This boy was the human embodiment of Dyau, one of the Ashthavasus. Shantanu, his father was the re-birth of another king, Mahabhisheka. The story concerning this is given in the Mahabharata as follows:

King Mahabhisheka after his death, attained Vishnuloka. Once he went to visit Brahma at Satyaloka. At that time Ganga devi was also present in Brahma's assembly. In that pious atmosphere, a gentle breeze began to blow and Gangadevi's clothes were slightly deranged. Just at that moment Mahabhisheka took a stealthy glance at her and she also returned that glance. This was noted by Brahma who turned both of them into human beings by a curse. Gangadevi begged pardon and Brahma lifted the curse and blessed her that the Ashthavasus would come to the earth to be born as her sons and that afterwards she could come back to heaven. After that Gangadevi was born as a mortal woman in the world under the name Ganga and she spent her days in the forests near the Ganga river valleys.

In those days the ruler of the lunar dynasty was a king named Pratipa. Having no children he went to the bank of the Ganga and performed tapas there. Gangadevi who was moving about in the forests nearby, saw the king deeply absorbed in tapas. She approached him and sat on his right thigh. She wanted the king to be her husband. He explained to her that the right thigh is the proper seat of the daughter-in-law and so she would become his son's wife in due course. In due course of time, Pratipa has a son, Shantanu, born to him. When Shantanu grew up into a young man, one day he went for a hunt to the Ganga-valley and there he met Gangadevi. He fell in love with her at first sight and courted her. Gangadevi agreed to become his wife on the condition that he should not say anything to displease her and if he violated that condition she would leave him. The king accepted the condition and they became man and wife.

At about that time, the wife of Dyo, one of the Ashthavasus, happened to see the sacrificial cow of the sage Vasishtha and wished to have it. She expressed her desire to her husband, Dyo. Dyo with the other seven vasus went and took away by force Vasishtha's cow. Vasishtha in his anger cursed the Ashthavasus to be born as mortals. they repented and begged pardon from Vasishtha. The sage told them that all of them would be born as the sons of Gangadevi and all except Dyo, who actually stole the cow, would return to heaven at the time of birth itself. As for Dyo, he would continue to live in the world for a long time, as an adventurous hero.

Gangadevi became pregnant and gave birth to her first child. She carried the child to the river Ganga and threw it into the river. Shantanu who followed her up to the river bank, did not say anything against her, remebering his promise.

Seven children were born to her and she threw all of them into the river in this way. When she gave birth to the eighth child Shantanu insisted that he would not allow her to throw away that child in the river. As he had violated the conditions of his promise, the angry Gangadevi left the palace with her child. She named it Devavrata and brought him up in the forest. The sage Vasishtha and Gangadevi taught him all branches of knowledge. Thirtytwo years later, the king went to the same forest for hunting. He saw a handsome by stopping the flow of the river Ganga. Getting interested in the boy, the king approached him. But by that time he had disappeared. The king prayed to Gangadevi to give back the child. She appeared with the child and after handing over the child to him vanished. The king returned to the palace with the child (Mahabharata, Adi Parva, Chapters 95-100.)


The name of Bhishma:
Devavrata was anointed, as heir-apparent. One day king Shantanu reached the forest near the Ganga river valley, for hunting. As he was hunting absorbed in the beauty of the forest scenery, he felt the perfume of musk filling the air in the forest. He wondered from where it could come. He went on and on trying to find out the source of this smell until he reached the cottage of a fisherman. The fisherman had a daughter named Satyavati. It was from her that the fragrance of musk spread all around (Satyavati's original name was Kali. The fisherman got her from the stomach of a fish. Since she had a smell of a fish she got the name Matsyagandhi.
She used to assist a fisherman in his work as a ferryman in the river Ganga. Once the sage Parasara happened to get into her boat and fell deeply in love with her. The sage removed the smell of fish from her and gave her the perfume of musk instead. By this mystic power he created a mist at noon and under its cover, he had a sexual union with her. As a result of it the child Krsna (Vyaasa) was born. The child immediately left the mother to perform tapas in the forest after promising to return to her whenever she wished for his presence. Although she gave birth to a child, Parasara blessed her that she would again remain a virgin. The whole episode remained a secret. As usual, Satyavati returned to the fisherman's cottage in the evening and continued to live with him. It is at this stage that Shantanu was attracted by the perfume of musk and came to the cottage where he met Satyavati.

The king fell in love with her at first sight. He asked the fisherman to give the girl in marriage to him. But the brave fisherman did not yeild to the king's demand immediately. He laid down several conditions; one of which was that Satyavati's sons should succeed to the throne of Shantanu. The king was in a fix. Devavrata was the eldest son and heir-apparent. To deny kingship to his sons would be highly improper. Unable to find a solution to this difficult problem, the king returned to the palace, much depressed and gloomy. there he avoided all company and took to his bed, passing his time in sadness and solitude.

When Devavrata knew about hism father's condition, he called the Ministers and asked them about it. They told him everything in details. At once, without informing even his father, Devavrata went to the fisherman's cottage on the bank of the river Ganges and begged for Satyavati on behalf of his father. the fisherman repeated his former condition. Devavrata agreed that Satyavati's son shall be given the right of kinship. The fisherman pointed out that disputes were likely to arise between Devavrata's sons and Satyavati's children regarding the right of succession to the throne. At once Devavrata stood up and made a solemn pledge (drdavrata) that he would remain a bachelor for life. The fisherman gave Satyavati to Devavrata to be taken to the king. Devavrata took her to the palace and presented her to his father.

The king, when he came to know of the part played by his son in that matter, rose from his bed and embraced Devavrata with tears of joy and gratitude. the gods showered flowers on the scene. Because he had taken such a solemn oath, it was decalred that henceforth he would be known by the name BHISHMA. The loving father Shantanu also gave him a boon that Bhishma would die only when he wished. (Mahabharata. Adi Parva, Chapter 100.)
Tags: appearance day, appearance of bhishmadeva, bhismadeva, bhismastami, devotee, gangapurtra, iskcon, krishna, mahabharata, prabhupada
E-mail me when people leave their comments –
Follow