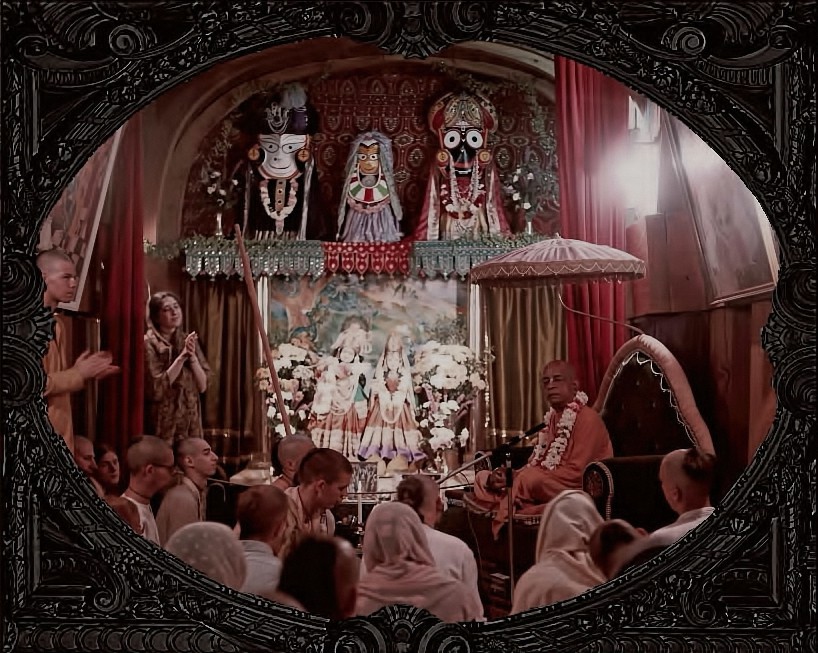 Any question that is put forward may be answered by quoting the authority, and that satisfies the saner section. That is the system even in the law court. The best lawyer gives evidence from the past judgement of the court without taking much trouble to establish his case. This is called the parampara system and learned authorities follow it without manufacturing rubbish interpretations.

When there is too much lawlessness and there are too many criminals, the state becomes overburdened and disturbed, and the state administrator are puzzled about what to do. Similarly, when the world is overrun by demons and atheists, they create a burden, and the demigods, the pious administrators of the universe, become perplexed. When the people of a state abide by the laws, administration is easy, but if people are criminals they overburden the state administrators. A similar situation sometimes upsets the balance of the cosmic affairs of this material world. Both he demons and the demigods always exist, but when the demoniac power increases, the world is overburdened. It is the system that the demigods approach Lord Brahma for assistance.

Of the four orders of human society, the householder is on the safe side. The bodily senses are considered plunderers of the fort of the body. The wife is supposed to be the commander of the fort, and therefore whenever there is an attack on the body by the senses, it is the wife who protects the body from being smashed. The sex demand is inevitable for everyone, but one who has a fixed wife is saved from the onslaught of the sense enemies.

As fire is exhibited in different forms of wood, so, under diferent conditions of the modes of material nature, the pure spirit soul manifests itself in diferent bodies.

Although one may claim that the body is his, he does not even know how it is working. A tenant in an apartment may pay rent and somehow or other occupy the apartment and enjoy its utilities, although he may not actually know how the heat and tap water are working. Similarly, although we do not know the details of how the body works, we are using this body, which actually belongs not to us but to Krsna.

Body in Krsna Consciousness and Iron in Fire (POP p.4)

The spiritual body is developed through the practice of Krsna consciousness. This material body is spiritualized by this bhakti yoga process. If you place an iron within fire, the iron becomes so hot that it also becomes fiery. When the iron is red hot, it aquires all the qualities of fire. If you touch something with that iron, that iron will act as fire. Similarly, although this body is material, it can become spiritualized through Krsna consciousness and act as spirit.