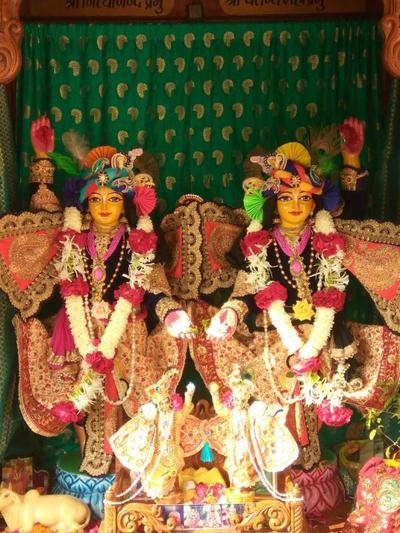 The All-India Padayatra has been on the road for thirty-six years – big time. Wherever padayatra goes, it implants the seeds of bhakti in people’s hearts. Some people become devotees by darshan of Sri Sri Nitai-Gaurasundar, some by reading Srila Prabhupada’s books, some by seeing the purity and love of padayatris, and some by honouring prasadam. Some also get attracted to our four-legged souls in padayatra, our oxen. Whoever took darshan of Their Lordships and had any encounter with padayatra is bound to become a devotee at some time or other. Srila Prabhupada sitting on the front of the rath also steals many hearts. Some say that the maharaja looked at them and gave them blessings, others say he looks very grave, and some ask whether he ever takes any rest. Matajis often start talking to Srila Prabhupada on the cart and tell him their problems. They also feel he gives blessings. Such miracles happen on padayatra.

Where no-one goes, padayatra goes. It covers every nook and corner of the city, town or village the padayatris visit. They create awareness of ISKCON and spread the message of Godhead all over. As our Gurudev says, “Padayatra does not just cover the villages, it also covers the area in between the villages.” It’s a travelling or mobile temple. Just as the doctor goes for a home visit when the patient is seriously ill, padayatra goes to give home treatment to materially diseased people. Padayatra is Chaitanya Mahaprabhu’s mercy flowing.

Suraj Shah is such a personality

Here is an example of someone who has received Mahaprabhu’s mercy: Suraj Shah from Rajkot. He was eight years old when Padayatra India was inaugurated at Dwarka dhama in 1984, thirty-six years ago. At that time Lokanath Maharaja and Yasomatinandan dasa inspired Suraj’s father to walk the 225km from Rajkot to Ahmadabad with padayatra, so with his parents and his sister Suraj also went along.

When padayatra returned to Rajkot after several years Suraj got the news from hoardings he saw all over the city. He was surprised and thought, “Oh! this padayatra started thirty-six years back and is still walking on the roads. All glories to them. How is this possible?” He is now a doctor by profession and he shared his realization in the form of a video. Please watch it. He was delighted to see Their Lordships. He also asked about Lokanath Maharaja and Yasomatinandan saying, “They were with us when we all walked in padayatra.” Suraj took darshan of Sri Sri Nitai-Gaurasundar and attended the programme.

All glories to the All-India Padayatra.