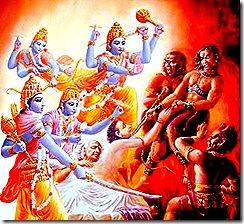 In the San Diego ISKCON temple in USA, there was a gentleman called *Mr. Prakash*. He was a reserved type of person who would come regularly to the temple feasts but never really showed a lot of enthusiasm.

One day he had a severe heart attack and was rushed to hospital. During the surgery he almost passed away on four occasions. It was touch and go and he slipped into a coma. He remained that way for several weeks after.

Badrinaryana Prabhu is a senior ISKCON devotee and was hence requested by Mr Prakash's wife to please visit her husband even though he was in a coma and pray for him.

Badri prabhu dutifully obliged and several times went to his bedside and read from shastra and chanted to the unconscious Mr. Prakash.

One day Badri got a call from Mrs. Prakash saying “Please come quickly to the hospital. My husband has come out of the coma but he only wants to speak to you.”

The relatives present thought he was talking about them. “Yes, we came several times but you were in a coma!”

Mr. Prakash shook his head to indicate that was not what he was talking about. “No. Badri, four times they came!”

So then the hospital staff said, “Yes, we almost lost you four times! You were in a coma but somehow we saved you.”

Again he shook his head. “No. Badri, four times they came!”

Badri started to realize what he was referring to. “Who came prabhu? *The Visnudutas?*“

“No, it was the bad people *[Yamadutas]*! They came the first time to take me away. But I told them ‘I am simply dependent on Lord Krsna.’ So they went away.”

“Then they came a second time. Again I told them, ‘Do whatever you must, but I am simply depending on Lord Krsna.’ Again they went away.”

“Then they came the third time, and told me they would take me away. I told them again, ‘You do whatever you must do, but I am dependent on Lord Krsna.’ Again they left.”

“Then they came a fourth time. But this time some of the good people came (Visnudutas). When the bad people saw them they said ‘OK, we have no jurisdiction here’ and they left. Then I came out of my coma.”

Mr. Prakash recovered and became one of the most enthusiastic and humble servants at the temple.

From this you can understand that what is happening during coma is completely different for a devotee than a *karmi*. Mr. Prakash was not initiated but he had some sense of dependence on Lord Krsna, so Krsna gave him the chance to increase his attachment.

_____
For some this true incident may enhance their love of God - for the skeptics maybe not...

But either way - I hope you find true happiness.