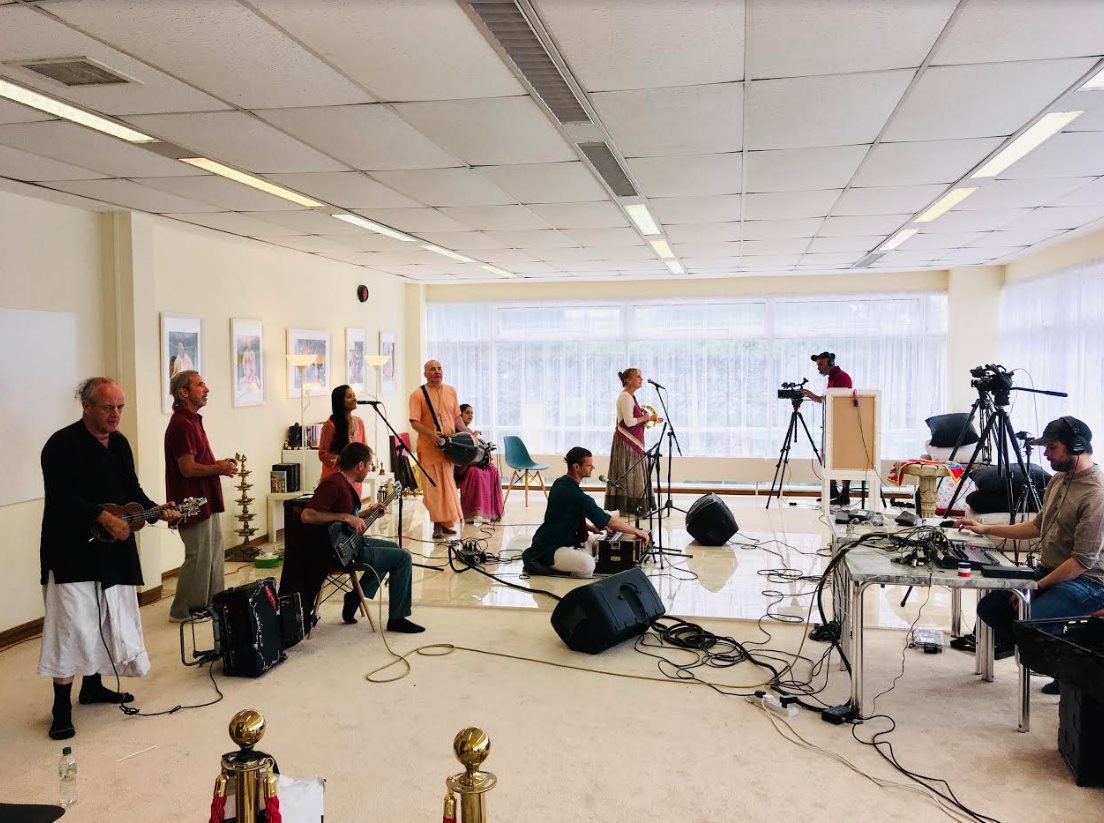 Last weekend marked the 50th anniversary of the iconic Glastonbury Music Festival – a renowned feature of the UK cultural scene. This massive event attracts over 250,000 people, hosting live stage performances from the most famous international artists, and is shown worldwide by the BBC.

It’s also a very important event for ISKCON in the UK as the movement’s biggest annual outreach event connecting with the diverse British public.

Devotees have been chanting, dancing and serving prasadam since 1970, becoming so much a part of the fabric of the festival that the Hare Krishnas are almost synonymous with Glastonbury. Many festival goers make a beeline for the Kirtan Tent as soon as they arrive.

Despite cancelation due to the Coronavirus, the show still had to go on with many performances, highlights and activities being broadcast online or on TV instead. The devotees were no exception. Organisers of ‘GlastHomeBury’ made a special request for the Hare Krishnas to take part.

With just a few weeks’ notice, a new Broadcasting Studio was created in London where members of the UK Festival Team joined together last Saturday (27th June) to chant LIVE online as part of the 3-day event.

Streamed on the official GlastHomeBury and Hare Krishna Festivals UK Facebook pages over 20,000 people tuned in to chant the Maha-Mantra. Many thousands more checked in on the kirtan later on.

“It was a fantastic experience. We’re used to travelling around the country to chant in Town Halls, but due to the pandemic we’ve been unable to do this. Thanks to Parasuram Prabhu and our partnership with Food for All, we were able to create a new broadcasting studio where we could hold a festival – and stream it live online. We’re grateful to the organisers for allowing us be a part of this historic event.”

The live streams can be re-watched here:

Devotees also created two short films which were shared with the GlastHomeBury audience in advance of the weekend.

Each summer in Glastonbury, London-based ‘Food for All’ serves over 15,000 plates of prasadam to festival goers, and thousands also take part in chanting (both in the Hare Krishna Tent and out on Harinam through the fields).

Many also receive one of Srila Prabhupada’s books and spend time discussing the philosophy and Krishna consciousness with devotees.

To keep up-to-date with the UK Hare Krishna Festival Team you can follow them on Facebook – www.facebook.com/harekrishnafestivalsuk