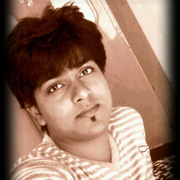 On the day of last Janmashtahmi, for the first time i went to Juhu Temple of RadhaRasbihariji... From there on was attracted to the deities...& in temple chanted 8 rounds & purchased Bhagwat gita.. was my new birth on that day..and then continued going to temple on every Sundays...Now i am going to RadhaGopinath Temple of Chowpathyy on Sundays.

I am humble person, cool minded, not sincere in studies but am tryng to be.. So that after becoming Chartered Accountant... I can easly preach about Krsna wid self respect.. Thank you..

Just want to learn from devotees how to proceed futher in this K.C Movement...& To guide me in My Studies & other personal things... And if I can get even advanced devotee wife if possible who should luv Krsna & not me..at any sort of Conditions..!!

Not yet decided... But from my heart I always think of preaching about K.C. Movement wid my Unkle & Aunty who r grtt devotees..& hope wid my wife too..!! All glories to Srila Prabhupadh.. Hare Krsna.. Hari Hari.. Hari Bol...!!!