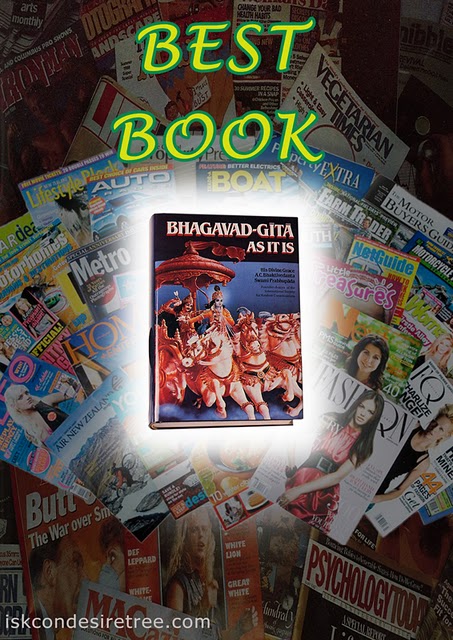 The Garbageman Gets the Mercy

At around 6:20 a.m. I was doing the morning reception service at the Radha-Krishna temple in London when a huge garbage truck stopped outside. I didn't pay much attention, being absorbed in my own business.

Then the garbageman knocked on the door and, smiling cheerfully, asked for a vegetarian book that he saw on display in the window. He wore dirty clothes and had a little wallet with holes.

He rejected "Higher Taste," saying he needed a big vegetarian cookbook. I showed him one, but I didn't know the price. So I asked for fourteen pounds and he gave it. Then he started asking questions about our philosophy in comparison to other religions. Apparently satisfied with my answers, he asked for a small book to read. I gave him "Raja-vidya: The King of Knowledge" and said that he could give any donation he liked.

He gave ten pounds and kept on asking questions. Krishna inspired me to give him the Bhagavad-gita. Praising his inquisitiveness, I entrusted the Gita to him as a gift. Surprisingly, he said, "How much?"

I smiled gently and repeated, "Just a gift."

All of a sudden he took out another very big note, gave it to me, and then returned to his truck.

I looked up in a prayerful mood. "You never know where, when, how, or to whom Krishna will reveal Himself," I thought to myself. Wherever there is a book waiting to be distributed, you open a spiritual portal for a miracle to happen.