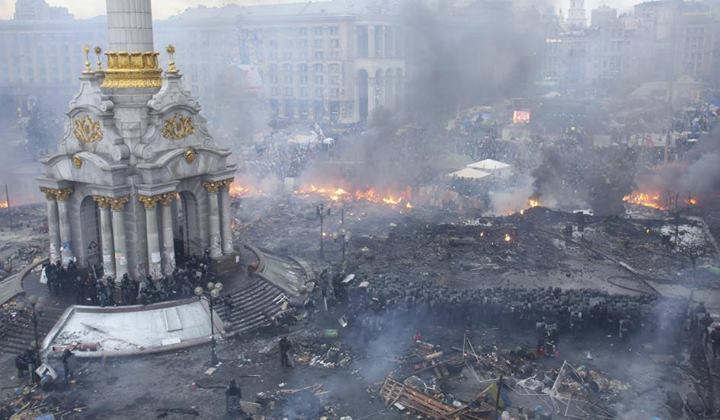 Dear devotees of Mayapur and all Vaishnava of the world. We in Ukraine are
in a war zone . For your clear understanding this is not an ordinary local
war. We stand on the threshold of a new confrontation between the two super
powers, America and Russia, who openly declare the Cold War, as it was in
the past. Ukraine is the last buffer between these super-powers, behind
which is already open direct confrontation between the two nuclear empires.
Many journalists and politicians already do not hesitate to talk about the
possible start of World War 3. Ukraine touching Russian border along a very
large portion of territory. And so Russia will not allow NATO bases to be
placed along her borders. But the most worrying thing is that this time no
one is about to back down. Usually any situation is solved through
diplomatic channels, but not now. They are ready to fight, using the most
difficult and sophisticated weapons. We are in the very border zone. And we
are seeing it with our own eyes. Major cities shot out using howitzers
(automatic mashines discharging missiles) and other very heavy artillery.
Over Donetsk, Lugansk and Slavyansk flying military helicopters and fighter
jets, occasionally releasing missiles in different objects. Our railway
station destroyed, Airport, the best in Ukraine built with the latest
technology 2 years ago completely destroyed and is not suitable for civil
aviation. Civilians are killed every day - men, women, children. Even some
of the devotees were forced to take up weapons.

For the rest of the world this conflict is virtual, but at any time these
days it can develop into the world-consuming. Krishna devotees know from
the words of Srila Prabhupada that World War-3 is inevitable. Collective
hard Karma of people is reached its climax. But the Sankirtana movement of
Lord Caitanya can stop it. Chanting can purify people's hearts from dirt
and severe reactions. Other methods will not help here.

If heavy sins of ugra-karma civilization (and especially for the mass
killing of cows for many years) will not be cleared through the joint
efforts of devotees praying to all-cleansing name of the Lord, humanity can
expect a terrible fate. We ask all the Vaisnavas in this fateful moment,
Unite! and join our kirtan! There is no other way! There is no other way!
There is no other way! By the grace of Lord, Krishna Consciousness is able
to spread and save the world. Simultaneously with the construction of a
grand temple in Mayapur planetarium, which predictions Bhaktivinoda Thakur
will be the cause and starting point when Krishna Consciousness will be
accepted throughout the world. We must also take this mass Sankirtana. Lord
Nrisingadev can work miracles, and now more than ever we need a miracle -
in an instant, the world can calm down and we will, as before go on
preaching Krishna Consciousness.

We are still distributing books on the streets. But the Harinam in Donetsk
is banned at present. We are singing kirtan in our temple. We ask you to
join our kirtan, and then thanks to the joint efforts and a lot of your
sincere and pure hearts chanting Holy Name this world turn into Vaikuntha.
Thank you dear devotees for your willingness to help! Our lives and the
lives of many people here depend on your grace. Hare Krishna!