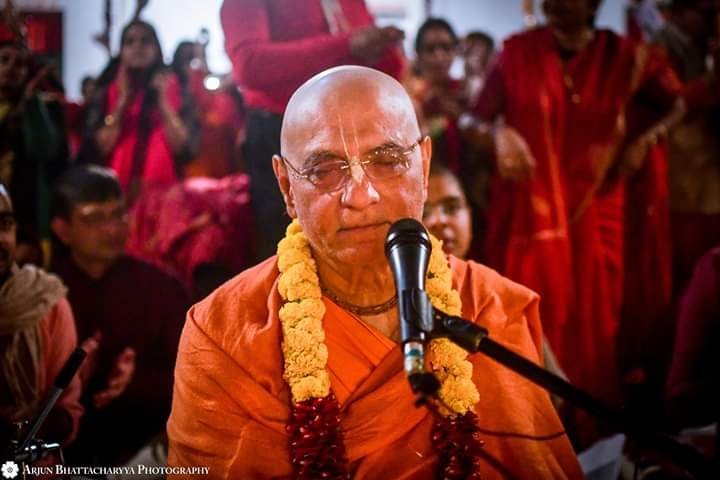 Where will I find that loving smile filled with care and affection that made you feel so important though you are worthless…., that caused you to remember Prabhupada in any circumstance…, that was pure sweetness…? I am so angry at you for leaving me here unprotected.

Why did you decide to go back to Srila Prabhupada’s Lotus Feet not caring for how we would be unable to tolerate your departure? With whom shall I laugh reading those signs in Italian that have a strange meaning in Bengali?

Are you going to tell Srimati Radharani that I treated you harshly when you were Bhakta Kishor? Or that you had to cook for me your “monk delight” recipe day after day when we were together in Calcutta?

Oh my most beloved brother, can you please plead my case with the Acaryas so that I may join you again in the intimacy of our Prabhupada family? I won’t forget you; even if Krishna gives me a long span of life, I will imprison you in the core of my heart and cultivate the ardent desire to hug you again.

The Mayapur temple and community were managed by two codirectors-Jayapataka Swami and Bhavananda Goswami, both from America. Jayapataka Swami was quite young, Bhavananda somewhat older. I was introduced to them in an office, where they sat side-by-side on a mattress on the floor, surrounded by devotees. After a brief initial exchange, they gave me a form to fill out, asking my name, address, and other details. One point on the form especially impressed me-that I should never act in such a way that would bring dishonor or disgrace to Srila Prabhupada. That became deeply ingrained in my heart.

Next I was introduced to a young Italian brahmacari named Madhusevita Dasa, who served as the temple commander. Like a military commander, he appeared grave and stern, which I thought was quite befitting. He was responsible for assigning services to devotees, and the first service he gave me was to help cook kichari, a mix of grains, dal, and vegetables that was distributed every afternoon to local villagers as part of a food-distribution program. When I went to the kitchen and reported to the elderly Bengali devotee in charge of cooking, he examined me from head to toe. I could tell he was not impressed. He took me out back, pointed to a pile of firewood, directed me to bring the wood to the kitchen, and left. He had not told me how much to bring, so I just kept carrying one armful of wood after another, and by the time he returned, half the kitchen was filled. He gave me a disapproving, disgusted look and told me to take most of the wood back to the pile. Then he led me to the storeroom, asked me to bring bags of rice and dal to the kitchen, and again disappeared. The bags must have weighed a hundred kilos each; there was no way I could even pick them up, let alone carry them to the kitchen. So I got hold of a bag and started to drag it across the floor, but along the way it became stuck between the staircase and a pillar. I pulled as hard as I could to dislodge it, but it would not budge, and when I gave it one last heave, the bag broke and dal scattered all over the floor. Just then, of course, the managing devotee returned. When he saw the mess I had made, he became so exasperated that he did not say a thing; he just gave me that look again, letting me know without words that he thought I was the most useless person he had ever met. My fumbling attempt at service, I felt, had caused only disappointment to the devotees. That was the beginning of my spiritual life in Mayapur. The next day, I was assigned to go out into a field with a few other devotees and cut the grass. Finally, I thought-a service I could execute without trouble. But when Bhavananda Maharaja heard what I had been assigned to do, he got upset and chastised Madhusevita for engaging me in such a menial task.

Madhusevita came to me and apologized. He told me that there was a practice that when someone joined the temple he was given various tough jobs to test his sincerity. I said that I actually liked the idea. I was starting my new life, and I was prepared to accept any service I was given. It was one of my first lessons in Krishna consciousness – that our life is meant for serving and pleasing Krishna. Our understanding lasted only so long, however, and one afternoon, when Madhusevita found me reading in the library, he ordered me to go out and do something. I knew that everyone was allowed to take some rest in the afternoon, so I told him that I was reading and would prefer to continue to do so. If he could not find anyone for the work, I would do it later. Perhaps no one had ever responded to Madhusevita in such a way- especially a newcomer. He flared up, calling me the most arrogant person ever. I did not argue but walked right up to Bhavananda Maharaja’s room and told him about how I’d been treated. Bhavananda immediately went down and again chastised Madhusevita, who became embarrassed and said that Satadhanya Swami had told him to keep me constantly engaged so that I wouldn’t have any time to slip into maya, the illusory aspect of the Lord’s energy that takes one away from Him. So then Bhavananda called Satadhanya and blasted him too, asking whether he thought he was running a Nazi concentration camp. From then on, things went more smoothly. The devotees all seemed favorably disposed toward me, I was getting closer with all of them, and Madhusevita and I were becoming good friends. He was a sincere and serious devotee with an upright and straightforward manner, and he did not waste any time. His commitment to Srila Prabhupada was obvious, and he was completely focused on his service.