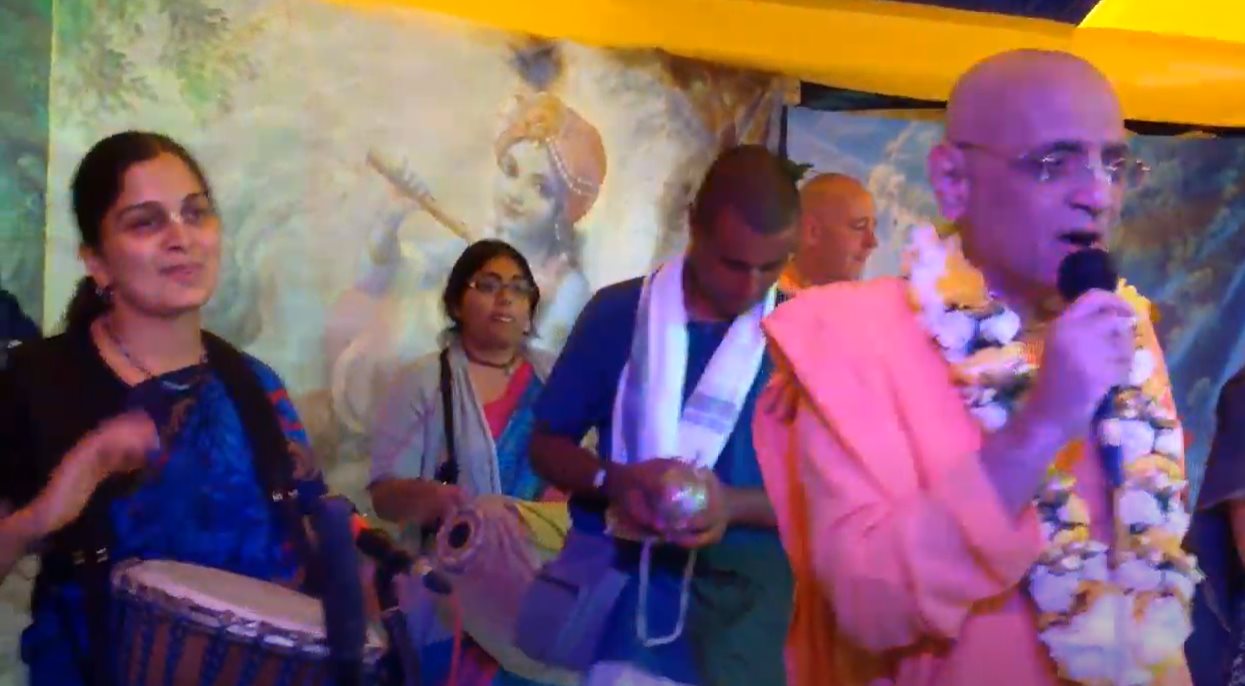 The disappearance of the stalwart disciple and loving servant of Srila Prabhupada, His Holiness Bhakti Charu Swami, on Saturday 4th July 2020 not only leaves a massive vacuum in the lives of the entire ISKCON community, but also represents a huge loss to the whole world. We’d like to join the chorus of tributes in gratitude to Maharaja with these few humble words.

In the service of His Grace Tribhuvanatha prabhu we are a small group of devotees in the UK traveling and holding Harinams and public facing Hare Krishna festivals as well as Rathayatras. We serve alongside Parasurama prabhu, his Food For All team and with the UK devotee community. His Holiness Bhakti Charu Swami has been a huge source of kind encouragement and inspiration for all of us throughout the decades.

20/6/2013
” I am very happy to hear about your preaching engagements. The Glastonbury music festival seems like a wonderful way to attract people to Krishna consciousness. During the early days when I was able to spend more time in England, I used to go to that festival. I remember going there twice. The youth those days used to be more open and receptive, and we used to have a good time there, preaching”

07/12/2017
” Hare Krishna festival team have played a great role in helping the movement to reach a different level of audience and I am really appreciative of that “.

We were delighted to welcome Bhakti Charu Swami to talk at our public hall program in Dartford, East London in 2015. To our embarrassment an audience of only 20 or 30 guests showed up initially. However as the Maharaja arrived then began to explain the philosophy of Bhagavad Gita many more people streamed in, bringing the numbers up to over 250. We were relieved, but Maharaja said it does not matter whether numbers are great or small we shall just try our best to preach. His great spirit of unity in the diversity of all people was also manifest in our kirtan tent at Janmastami in 2017

23/09/2017
” I too very much enjoyed being present in your tent during the Janmashtami celebrations at Bhaktivedanta Manor. The tent was very nicely done depicting the mood from where Srila Prabhupada started this movement, I could see that this tent attracted lots of Westerners and I was very pleased to see that. We definitely need the movement to reach everyone and I can see that you all are really dedicated to spread Krishna Consciousness among the westerners. Please continue to serve nicely like this going forward “.

Many of us will be overwhelmed by the departure of our unique spiritual leader Bhakti Charu Swami; perhaps this letter – sent to his disciple Ratnavali (a dedicated member of our festival team) 18 years earlier – can offer some solace at this difficult time of loss…

Why did my last email make you cry? Accept everything as Krishna’s mercy and move forward. That is what Krishna Consciousness is meant for. Krishna is our dearmost friend and greatest well wisher. Therefore, whatever happens according to his arrangement is for our ultimate benefit.

Yes, a devotee always looks at things from a positive perspective. Krishna Consciousness means all to gain and nothing to lose. The quotation from Srila Prabhupada you mentioned, “We have to transcend the gross and subtle platform and come to the spiritual platform” is very correct. That is our goal to become totally free from material bondage. Both gross and subtle platforms are material bondages. When we become situated on our spiritual identity then it is like waking up from a dream. We wake up in another plane altogether and all that happened to us on the material platform does not bear any significance.

Srila Prabhupada, the founder Acharya of ISKCON is the guru for everyone in ISKCON. His siksa in the form of his books is the foundation of ISKCON and he is worshipped by everyone everyday during mangal arati and guru puja.
I am becoming more and more aware of the fact that my role as a spiritual master is simply to represent Srila Prabhupada and assist my disciples to approach his Divine lotus feet. I hope this meets you well.

Yours in the service of Srila Prabhupada
Bhakti Charu Swami “