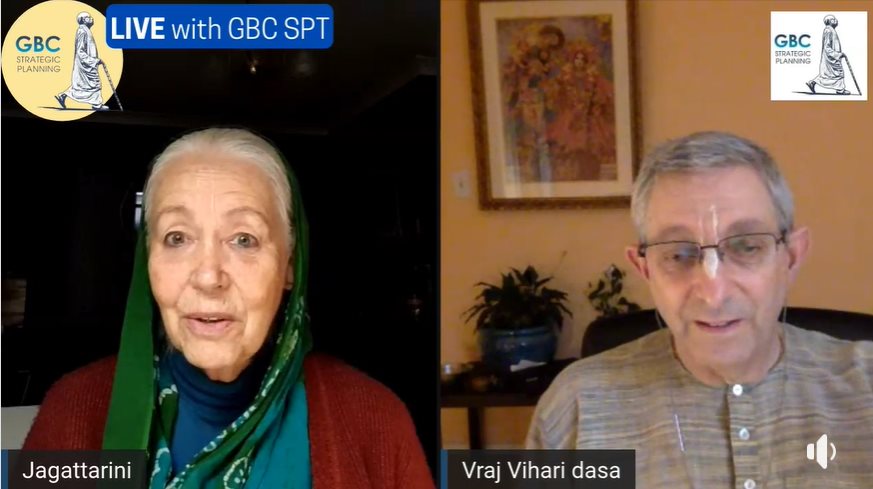 Let us hear from HG Jagattarini Devi Dasi as she reaffirms the Purpose # 5 of ISKCON (To erect for the members and for society at large a holy place of transcendental pastimes dedicated to the personality of Krishna).

Her Grace Jagattarini Mataji joined ISKCON and first met Srila Prabhupada in America in 1970 (many of you may have heard of this famous story of a successful actress becoming a devotee). Through her connections with the Movement, Jagattarini met her husband, Bhurijana Prabhu, and together they pioneered a nama-hatta center in Hong Kong. Srila Prabhupada encouraged her to use artistic talents in attracting people to the cultural side of devotional service. Some years later this manifested during her stay at the Gita Nagari farm (USA) as a series of puppet shows, later presented for worldwide viewing by ITV. In 1983 she moved with her family to Sri Vrindavan Dhama, and they spent the next 13 years teaching in Bhaktivedanta Gurukula. In her spare time, she regularly journeyed by local transport to significant holy places throughout the outlying Braja District. After touring the sacred land for years Jagattarini Mataji amassed a treasury of realizations about different pastime places in Sri Vrindavan Dhama and developed a deep attachment to them.

Since 1996 Jagattarini, Bhurijana and family have been based in Perth, where Bhurijana Prabhu lectures on the Bhagavatam. Jagattarini Mataji continues to draw her artistic inspiration from Vraja Dhama, and since 1998 she has been working with a variety of mediums producing miniature three-dimensional diorama exhibits, depicting Krishna’s nectarean Vrindavan pastimes. She is establishing these dioramas within a project known as Gopinatha Dhama, which is meant to attract souls to the glories of Sri Vrindavan Dhama.