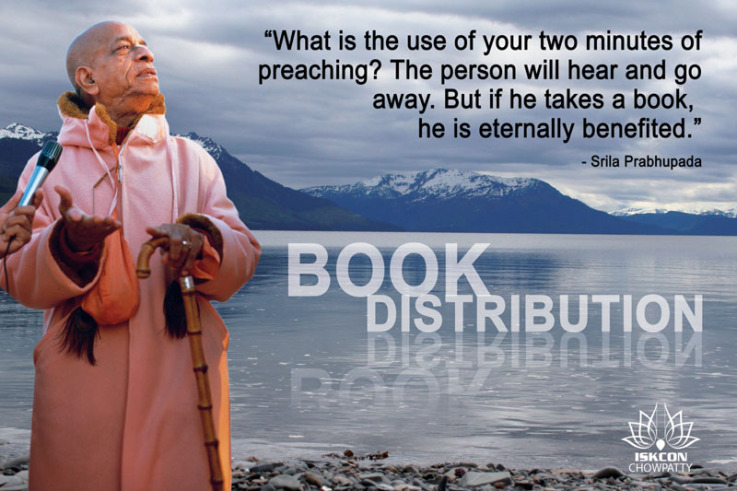 I was distributing at Pierce College in Los Angeles. It was slow.....very slow. Hardly any books were going out. It's been quite some time since I've been able to go on book distribution (health problems), so it was nice to be out on the front lines again. But this was not what I expected. So I decided to save my energy for the next day. As I was leaving, a student came to me and asked, "What are these books about?" I explained to him, "These books help us understand higher spiritual values in life and how to live peacefully in a world filled with so much stress."

"Really! Wow, I'm into this. Tell me more about them."

I showed him a number of books, and afterward he ended up taking a stack and giving a nice donation. I was quite surprised, because I hadn't even approached him: he came to me, or should I say Krsna stepped in to encourage me. I thought, "All right, Krsna, that was pretty special. I'll stay." Book distribution is sooo sweet, but it also has it's bitter side -- so it's a little like chutney, which is so sweet you don't want to stop eating it but so spicey hot you hesitate to eat it.

And now we are entering the sweetest time of the year: December, which means the Prabhupada Marathon. Happy are the book distributors to whom such marathons come unsought, opening for them the doors to the spiritual world.

Many temples have already started their marathon. I just received a letter from Bali, Indonesia, saying they've been on it for some time now. For some it's the November/December Prabhupada Marathon.

It's at times like this that we get the special mercy of Lord Caitanya. The Caitanya-caritamrta says, "The Krsna consciousness movement will inundate the entire world and drown everyone, whether one be a gentleman, a rogue, or even lame, invalid, or blind. . . . In distributing love of Godhead, Lord Caitanya and His associates did not consider who was a fit candidate and who was not, nor where such distribution should or should not take place. They made no conditions. Wherever they got the opportunity, [they] distributed love of Godhead."

Now somehow we members of the Krsna consciousness movement have inherited this great compassionate mission of Lord Caitanya. There is so much darkness in the world. Most people don't even know the ABCs of spiritual life -- that we are not the material body but spirit souls who are eternal servants of Krsna. For most people, book distribution is the only chance they'll get to learn about the soul and the Supreme Soul. So let's put some extra effort into this marathon to help them get real knowledge and thus enter onto the path of real happiness. This is the mission of the Krsna consciousness movement: /sarve sukhino bhavantu, /to make everyone genuinely happy. Devotees are naturally compassionate, so if we really want to help others, let's try to help as many souls as we can to hear about Krsna.